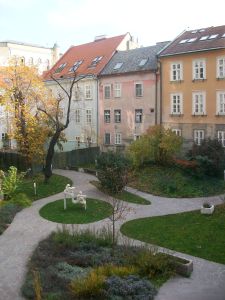 Bratislava, Slovakia is the only world capital that borders two other countries.  (Isn’t Wikipedia a wonderful thing!)  And last evening I had the chance to enjoy some of the best of this city with my friends and colleagues from the International National Trusts Organisation (or INTO).

After my all-night flight on election night, I arrived in Vienna around 9 a.m. local time and caught a bus from the airport that took me the 45 minutes to Bratislavia.  The countryside between the airport and the city was very rural, broken only by the occasional wind farm and two delightful small historic towns (one of which still maintained its historic city wall surrounding the town).  Since the hotel where I’m staying didn’t take guests until 2 p.m. and I needed to do something to stay awake, I ate a bit of breakfast and then strolled the streets of Old Town Bratislava.

And I’m here to say that the historic core was hopping.  I was on the streets at lunch time and those streets were swarming with people eating lunch, tourists snapping photographs, and many more people simply out doing their jobs.  I learned at dinner last evening that the return of private property to individuals following the fall of the Soviet Empire has meant that most of the restoration in this district has taken place through private investment.  There are some beautiful state-owned buildings and a number of historic churches (see photo), but the vast majority are homes or shops.

I was able to check in and caught a couple of hours of sleep – just enough to get refreshed without missing dinner!  And I’m glad I made it.  Meeting up with about 15 colleagues from around the world, we were led by our hostess, Michaela, back through Old Town – which was beautifully lighted for the evening – eventually ending up with a walk along the Danube.  The restaurant where we had our opening dinner was the first project of the National Trust for Slovakia some 14 years ago, where they rescued a historic toll keepers house from demolition.  The walls of the restaurant were covered with old photographs of the bridges across the Danube.  We enjoyed our shot of brandy, some good Slovakian wine, and a tasty dinner topped by a sesame seed pastry for dessert.  I sat with the head of the Slovakian cultural agency for heritage, the head of the Gilderland Trust (Holland), our INTO Secretariat staff member Catherine Leonard, and several other colleagues for a delightful evening’s conversation.

And I’m still adjusting to the time change.  I think it is about 5 a.m. now in Slovkia.  I’m not 100% sure because I stopped wearing a watch about a year ago and my blackberry (which is now my version of a pocket watch) doesn’t automatically update itself to the local time.  I’m always calculating what 6 hours ahead actually means.  I’m sure I’ll do great until about 2 p.m. this afternoon…when I’ll be ready for that nap again.  So expect More to Come… posts at the weirdest hours over the next few days.