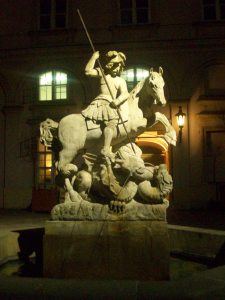 Last evening in Bratislava, i went with friends and colleagues from the International National Trusts Organisation (INTO) to a lecture and reception hosted by the Slovakian Ministry of Culture and the National Trust of Slovakia.  The evening was at a former palace for the Roman Catholic Cardinal in Bratislava, and so was very opulent and grand.

We entered through a courtyard and came across the statue of St. George slaying the dragon that you see at the left.  We were admiring it when someone said, “I didn’t know St. George had to kill THREE dragons.”  Well, we looked closer and there was only one dragon, but this variety had three heads.  One bit of speculation was that the Cardinal simply wanted more water in the fountain and a three-headed dragon was the answer.

Whatever the reasoning, it was another good day for our meetings, which were held at the University Library in Old Town.  The library was part of a complex of three historic buildings, which have been adaptively reused.  The courtyard (see photo) made for a beautiful entryway into the library.  And since there were multiple buildings (although they were all connected on the inside), it was fun to sit in our board room and  hear the occasional street singer’s tunes rising up from the alleyway below that separated the buildings.

Between the meetings, lectures, and receptions, it was great to reconnect with friends and colleagues.  One of the unexpected pleasures of getting to represent the National Trust on the INTO Executive Committee is that I’ve come to know – and become friends with – people from all across the world.  I so admire many of these people and it is a treat to spend time with them.  Mr. S.K. Misra is the head of the Indian National Trust (known as INTACH), and he and his wife have made such a difference in the lives of so many people by using heritage as a way to create jobs and provide livelihoods.  He gave a great lecture today in our closing seminar.  I also had the chance to reconnect with his niece, who is studying historic preservation in the United States.   S.K. is just one example of the good friends I’ve come to know, and on this trip we all reconnected.  I also met new colleagues from places such as The Netherlands.  It is quite a privilege to work with these individuals, plus they are just a great deal of fun.

After our closing seminar today, I bid the group good-bye, gathered my belongings, and hopped in a taxi to go to the train station to catch a train to Vienna.  Well, my taxi driver was English-challenged, and I’m certainly Slovakian-challenged, but he finally figured out where I wanted to go when he said, “Choo-choo?” and I nodded while saying, “Yes, yes.”  So we got to the Choo-Choo station ten minutes before the train was scheduled to leave.  After navigating the ticket buying process and finally finding the right track, I ran the last bit to jump on board with one minute to spare.  It felt good to sit and just be for an hour.

My taxi driver in Vienna had a better grasp of English, and he quickly got me to my hotel in the heart of the central city.

After dropping off my bags, I went out for a breath of fresh air and to catch a bite to eat.  I took one picture of Vienna at night, and plan to fill up the memory card tomorrow on my day of sight-seeing before I return home.  I’m now sitting in the lobby of my historic hotel, working on my glass of wine, and finishing up this post before heading off to bed.

But a conversation in the bar next to me has reminded me of another part of this trip I’ll always remember.  It has been amazing to be in Europe on the days following Obama’s election as President.  In Bratislava it was all anyone wanted to talk about, and everyone – including strangers who just found out I was from the US – wanted to talk about the election.  Everyone was very excited about Obama and what it meant for America and the world.

Which is what makes the conversation in the bar so jarring.  There’s an American in the bar who is pontificating about America going to hell in a hand basket (my characterization) because we elected Obama.  Someone told me that Vienna was a conservative city.  But I didn’t expect to come here and immediately run into a disgruntled conservative American.

Oh well.  I’m going to put that aside and remember the genuine excitement about our country from so many of the people I’ve met over the past three days.

Look tomorrow evening for more photos from this wonderful city.

"A journey is called that because you cannot know what you will...do with what you find, or what you find will do with you."