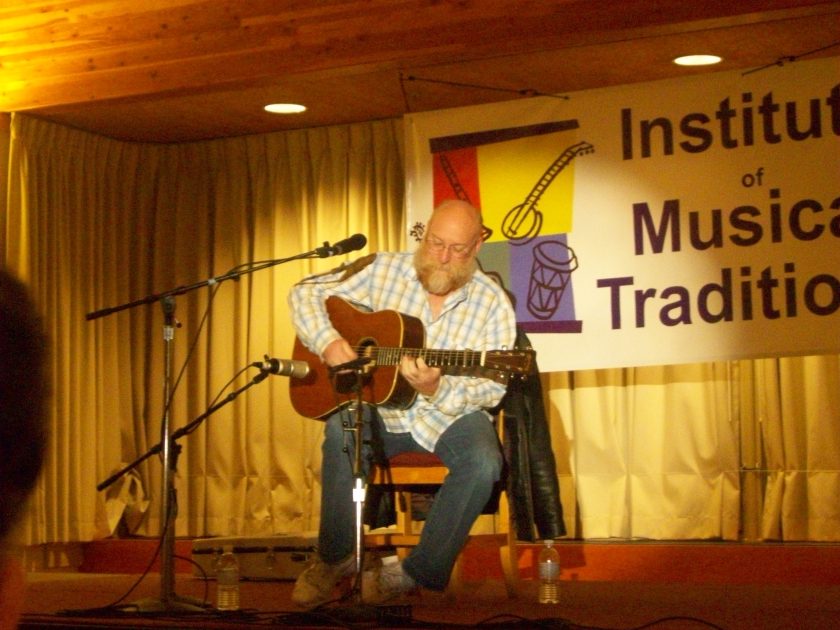 All of David Grier’s guitar skills were on display tonight at the Monday evening concert of the Institute of Musical Tradition in Rockville.  Greir opened with a spirited version of Durham’s Bull, an old fiddle tune (and afterwards opined that all fiddle tunes are described as “old”), and then put on a two-hour tour de force of flatpicked guitar and bad jokes.

It is a tall order to keep an audience’s interest with two hours of solo flatpicked guitar, but Grier made it look easy.  With equal measures original tunes and flatpicking chestnuts – with the occasional popular tune such as Yesterday thrown in as well – Grier showed why he’s one of the best flatpickers on the planet.

This was an evening of highlights:  the beautiful intro for Red Haired Boy, the original waltz High Atop Princess Cove, and the Stephen Foster tune Angeline the Baker among them.  One of Grier’s best recorded efforts is the Bill Monroe tune Old Ebenezer Scrooge, which he worked as a duet with bassist Todd Phillips on the Grammy award winning True Life Blues:  The Songs of Bill Monroe.  Tonight he played it as a powerful solo piece which fared much better than the “stupid fast” (Grier’s description) version of the other Monroe tune Roanoke that ended the show.

However, any complaints are nitpicking, and the numerous guitarists in the audience were there for a different type of picking.  Suffice it to say that Grier satisfied.

In poking around on You Tube, I found the following video that features a young Grier with other winners of the International Bluegrass Music Association (IBMA) instrumentalists of the year awards.  Enjoy Shenandoah Breakdown by Grier (displaying a fun use of time on his guitar break) with Sam Bush on mandolin, Jerry Douglas on dobro, Stuart Duncan on fiddle, Tom Adams on banjo, and the late Roy Huskey, Jr. on bass.