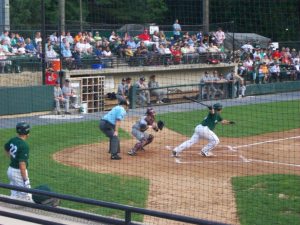 One of our joys of summer is watching and supporting college wooden bat baseball.  This is baseball for college players to help them learn to hit with wooden bats after years of hitting with aluminum bats.  (Don’t you just hate the “ping” of the aluminum bat on ball?)

We’re lucky to have one of the top wooden bat leagues in the country here in the DC area – the Cal Ripken Sr. Collegiate Baseball League – with two teams within easy driving distance.  We’ve had season passes to the Bethesda Big Train for a number of years and we also catch some games of the Silver Spring-Takoma Thunderbolts.

Candice helped organize a special event for her employer – Christ Episcopal School Night – at the Bethesda Big Train game on Friday.  It was great fun.  Some 80 CES parents, staff, and students came out as part of a 700+ crowd on a beautiful summer night to see the Big Train absolutely crush the Alexandria Aces.  When we left after 7 (we had children to collect), it was 14-0.  The games aren’t usually that lop-sided, but it was still a great deal of fun, made even more so with the Friday night crab cakes available at Shirley Povich Field.

College Wooden Bat League baseball is small-town baseball that is hard to beat.  As I wrote last summer, one of the best

baseball books ever is called The Last Best League, a wonderful tale of the Cape Cod Wooden Bat League.  Written by Jim Collins, it tells you about how college players who are working to make the major leagues travel across country to play in small town ballparks, stay with local families, and live their dreams.  As the website Curled Up with a Good Book says:

Author Jim Collins, himself a tremendous high school talent when an injury crushed his dream of playing professional baseball, spent a season with the Chatham A’s of the Cape Cod League. The book focuses on the players, the coaches, and the many volunteers as they go through the trials and tribulations of a season filled with losses, injuries, self-doubt, and personal triumphs. Set amidst the backdrop of the many small towns that grace the Cape Cod area, Collins captures both the quintessential charm of baseball and its strong links to the community, as well as the drama that occurs on a regular basis when a talented group of young men battle their opponents, each other, and their personal demons.

For those who are really captivated, let me recommend another book.  The founder of the Bethesda Big Train and its driving force for the team’s first decade, Bruce Adams, is also the author of Fodor’s Baseball Vacations. In this book, Adams and his wife tell you about all the MLB parks, but their real love kicks in when they are talking about the minor league and – yes – wooden bat league parks in the small towns around the country.