So with the city’s two cathedrals located just steps from my hotel, I awoke from a short nap and headed out to explore these great historic landmarks.  (And as I’m writing this, my connection with the cathedrals continue, as I’m listening to the late afternoon peal of 19 bells from the Christ Church bell tower.)

Christ Church Cathedral (pictured at the top of the post) was my first stop.  This is the Anglican-Episcopalian cathedral of the Church of Ireland and it dates from 1030, when Viking Dublin’s first cathedral was built on the site.  The current building took its present shape in 1180, and was extensively remodeled in the 1870s.

It is a beautiful fall day in Dublin, so the light was streaming into the building through the stained glass windows.  The building is an interesting mix of periods and architectural styles, with the entire south transept dating from the 12th century.  The large 11th century crypt had recently been restored and reopened and was fascinating to visit.  I always find the choice of artifacts in these types of museums to be a fascinating study in and of itself.  In the crypt one can see a beautiful silver service given by King William (of William and Mary fame) in thanksgiving for his victory in Ireland during the War of the Three Kings.  Nearby, one finds the not quite as beautiful mummified remains of a cat and a rat which were trapped in the organ pipes in the mid-1800s.  Something for everyone!

Both Christ Church and St. Patrick’s (my next stop) are known

for their music programs, so I was delighted to see both the historic tracker action organ and a beautiful new modern three-manual tracker built in 1984 by Kenneth Jones of Bray, Co Wicklow.  Unfortunately, I was unable to get a very clear picture, due to the lighting (or, more likely, the skill of the photographer), but I’m posting this anyway for my good friends John and George at Taylor and Boody.

I could go on, but like my schedule today I have to keep moving.  A neighborhood pub provided lunch, and then I was off two blocks to see St. Patrick’s Cathedral.

One of the first things I saw as I came around the corner was a sign on the side of the building which read, “

St. Patrick’s Cathedral Choir School, Founded 1432 A. D.”  I had to laugh, because two days ago I was at Andrew’s school – also founded as a school for choir boys – as they celebrated their 100th anniversary.  It was a great reminder of the tradition our son has been privileged to continue.

From a beautiful park, one moves inside the cathedral, which is chock-a-block full of memorials, plaques, and the like.  Jonathan Swift was the dean here and there are panels

devoted to his political, religious, and literary life.  I was pleased to see a memorial to the great blind Irish harper Turlough Carolan, who wrote some of the most beautiful melodies in Celtic music.

It just so happened that as I was walking around St. Patrick’s, the organist began to play in anticipation of the evening’s service.  If you look at the picture of the choir stalls below, you can see the back of the organist in the opening at the top.  There’s nothing better than viewing a beautiful cathedral with live organ music in the air!

So, I’m wrapping up my “vacation” time in Dublin and heading off to a working dinner (where I hope to find a little Irish music in the process.  But don’t worry, I’ll get out some more (Andrew just sent me an email telling me to look for the bridges in Dublin designed by Santiago Calatrava) and I’ll be posting on the PreservationNation blog as well during the coming week.  After a couple of more pictures of St. Patrick’s, I’m posting a video of an English guitarist playing Turlough Carolan’s most famous melody, Si Bheag Si Mhor. 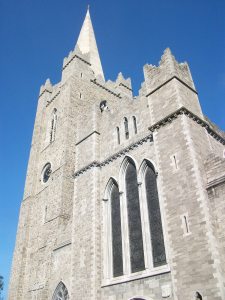 "Courage is not the absence of fear, but the strength to do what is right in the face of it."