I love it when my passions collide.

Like when the November/December issue of Preservation magazine has a story on the saving of one of the few remaining Negro League baseball stadiums.  Any preservation story that begins with the name Monte Irvin is guaranteed to warm the heart of this old NY baseball Giants fan.  My mother-in-law thought that because of my position with the National Trust for Historic Preservation I must have chosen the cover picture for the magazine.  I didn’t (although I gave writer Eric Wills lots of encouragement as he put the story together), but I do have a beautiful print of that great shot ready for framing for my office.  And from Preservation Online comes the encouraging news that Patterson, New Jersey’s  Hinchliffe Stadium…

…may be restored. The city of Paterson and the school board entered into a shared services agreement in late October 2009, and in early November, voters passed a referendum asking for $15 million to fund the stadium’s renovation. If all goes according to plan, the city will receive permission to issue a bond ordinance and then solicit proposals to renovate the site.

Preservation is a terrific magazine, and you should become a subscriber if you want lively writing about places that matter.  But this isn’t a post about those passions of

But before all you rockers get excited,  I’m not writing about my colleague Sarah Heffern’s great blog post on how fans turned preservationists are working to save the home where Bruce Springsteen wrote Born to Run, as terrific as that news is.

Nope, this is my quarterly love poem to The Fretboard Journal, where the story of tracing John Lee Hooker’s haunts in Detroit has a decidedly preservationist bent.  In Chasing the Echoes, writer Jeff Samoray goes looking for the places cited in Hooker’s Boogie Chillen, a paean to Detroit’s old Black Bottom neighborhood that hit the top of the R&B charts in 1949 when it was released.  It is a well crafted but ultimately sad story of how a thriving African American neighborhood that held such meaning to millions of Americans and music lovers was destroyed in the 1960s to make way for the Chrysler Freeway.  A few places remain.  The Apex Bar – where Hooker and other bluesmen use to attract crowds that lined up around the block to pay $1.50 for a show – is still open and run by the original owner’s granddaughter.  It looks and sounds like a great place to stop in to capture some of the city’s musical history.  Another place that’s just barely hanging on is the United Sound Systems Recording Studio, which is boarded up and unused.  In the day this unassuming house turned recording studio hosted everyone who was anyone.  As Samoray writes,

Any place with that pedigree deserves more than a plaque.  It deserves to be saved and reused, so the music in the brick and mortar can inspire another generation of musicians.

The Hooker story is just one of about six interesting pieces in the Winter issue.  The cover story is on bluegrass flatpicker extraordinaire David Grier (read my review of his show at IMT last year), and it immediately drew my eye.  I enjoyed reading about his early interactions with flatpicking pioneer (and former Byrd) Clarence White, as well seeing the great pictures of Grier’s 1955 Martin D-18 that was a gift from his father, who played banjo as a Bluegrass Boy for Bill Monroe.

I had picked up an Eastman mandolin a few weeks ago when I was in Fretwell Bass Shop in Staunton and was surprised by how well it played for such an affordably priced instrument.  So serendipity being part of life,  I loved seeing the photo essay in this issue on this China instrument company that takes a different approach from the usual Asian mass-produced builders of cheap knock-off models of famous instruments.

The Fretboard Journal has more: a terrific story on guitar builder and surfer James Goodall, a fascinating tale of the rescue of a priceless collection of banjos, and a profile on the understated J.J. Cale. 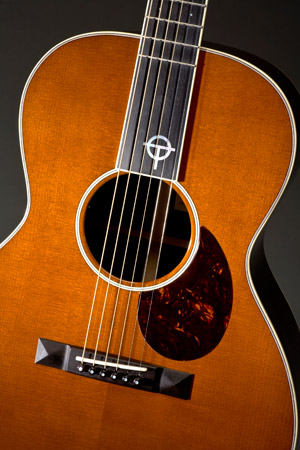 But the most moving article was the last one I read on bluesman Otis Taylor and his work to reclaim the African heritage of the banjo.  It is unusual enough for an African American youngster to get hooked on banjo by being a regular in the early 1960s at the Denver Folklore Center.  But when that musician tries for years to get a record deal, then drops out of the business altogether for a number of years after a friend dies of a drug overdose, in the intervening period becomes an antiques expert on mid-century modern pieces no less, and finally comes back to music to find his heart – well that’s a great story.  Taylor tells about reclaiming the blues heritage of the banjo, working with OME Banjos on a new model, and his interests in mandolins.  The coolest picture in the entire book is Taylor holding his Santa Cruz Guitar Company signature model with a beautiful dark caramel brown stained top, no frets above the 14th position (because Otis doesn’t play up there), and stylized “OT” initials at the end of the fretboard as an honor to Otis’ father, who used to paint and would sign his art that way.  You can see the company’s picture of the guitar here, but you’ll have to buy the magazine to see their wonderful photo.

And if you love players, builders, and stories, you should buy it at Barnes & Noble, Borders or your local high-end guitar shop.  The Fretboard Journal is part of a new breed of magazine:  a reader-supported publication.  That means you pay a subscription price that’s not artificially lowered because of extensive ads.  The only ads in this magazine are from instrument builders.  The entire package is high quality, and I have issues 1-16 all in a special place on my bookshelf.  The magazine is produced by great people who love beautiful instruments and the people who make and play them.

Finally, as is my custom, I rooted around on YouTube and found this video of Otis Taylor showing the range of his Santa Cruz guitar.  Enjoy!