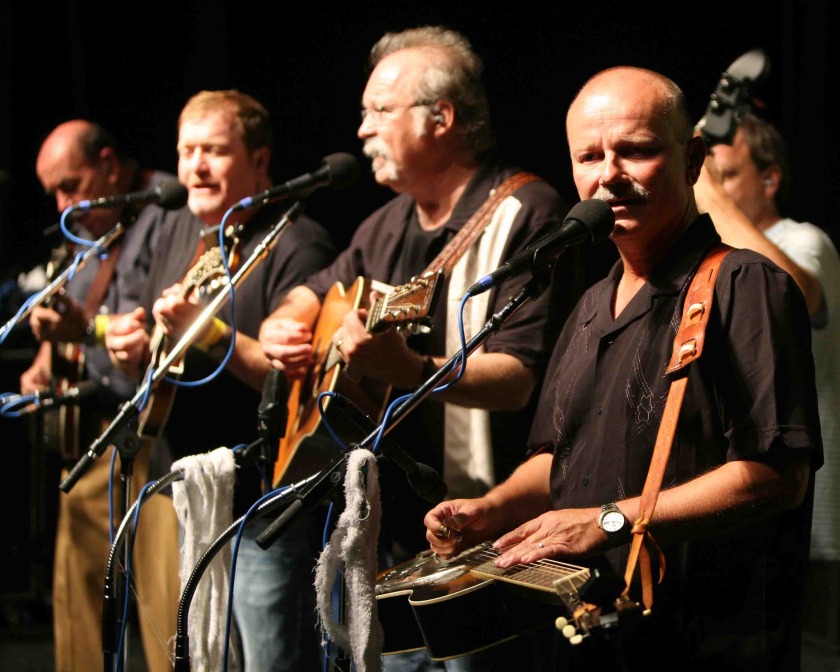 Cynics (or my children) looking at last evening’s twin bill at the beautiful Strathmore Music Hall would be tempted to title the show, “We’re Not Dead Yet!”  In response, the current edition of the Seldom Scene (one original member) and the Nitty Gritty Dirt Band (with a whopping three of the five original members) could respond with the same motto:  We may be older than dirt, but we can still fill a concert hall!

The Scene (photo at the top of the post) played first, with mandolinist extraordinaire Jimmy Goodreau sitting in on a half-day’s notice for the ailing Lou Reed.  This isn’t your father’s Seldom Scene…the vocals don’t match those of Starling and Duffey, and no one can play those Dobro licks like Mike Auldridge…but this is still a good bluegrass band.  Dudley Connell is an expressive lead singer, Ronnie Simpkins — who along with Goodreau was a long-time member of the Tony Rice Unit — can play bass with the best of them, and 70-year-old Ben Eldridge provides the link to the original Scene.  I was only sorry that Eldridge’s son Chris — of The Infamous Stringdusters and Punch Brothers fame — didn’t sit in as he will occasionally do. It was a fun 45-minute set that delighted the crowd in Bethesda.

The Dirt Band is still doing what they do best — playing a mix of anything that pops into their head.  I’m dating myself now, but I saw NGDB when Jeff Hanna (motto: my hair is ALWAYS going to look better than  yours) was playing washboard and they still had the sense of a jug band about them.  Last night’s show was filled with old favorites and thankfully some new material as well.  John McEuen still hams it up on the stage (when you’re a six-foot plus, very hairy banjo and fiddle player, it probably comes with the territory).  Jimmie Fadden remains a terrific harmonica player.  With Jim Ibbotson’s departure, Hanna handles most of the lead singing. A riff on what would have happened if the Beatles had been a bluegrass band (answer: Paul McCartney’s divorce would have been a lot less expensive) led to Hanna’s bluegrass cover of Get Back.

The title song on their new CD was written by Gary Scruggs, and when Hanna mentioned this I got to thinking about another Scruggs song, The Lowlands. When searching through YouTube for some appropriate video to add to this post, I came across the Dirt Band — along with Jamie Hanna and Jonathan McEuen — playing (you guessed it!) The Lowlands. Jamie and Jonathan are cousins (their moms are identical twins) and their dads are NGDB members Jeff and John.  I’ve always enjoyed the family nature of bluegrass and roots music (think Carter Family, Del McCoury, Nickel Creek) so I love to see these guys singing and playing with their dads.

The Hanna-McEuen duo sings beautifully.  I’m sure their old men are proud.  Enjoy.