This is a tradition that begins with an oft-told story.

When Claire was in fourth grade, she returned home from school one day to announce that the teacher had asked everyone to tell the class what their parents did for a living.  So I asked Claire, “What did you say?”  She replied, “I said my father signs papers and goes to meetings.” In her own straight-forward, fourth grade sense of the world, she was correct, and I told her so.  But I also said that meetings and papers were not why I worked.  And from that conversation, the annual Spring Break trip to get to know Daddy’s world was born.

A few weeks later I spoke to my then-boss and said I’d like to take one child with me on a trip during Spring Break to see the work of the National Trust.  Dick blessed the idea, saying he had done something similar when he worked in the White House.

My rules:  it had to be a legitimate work trip where they could see some on-the-ground preservation work, it had to be to some place the children were keen to visit, we had to be able to use frequent flyer miles for the children’s plane tickets, and we would take an extra day to visit things the children really wanted to see in the city or region.

Claire was up first in fifth grade (since she was the inspiration), and as luck would have it I was attending the National Main Streets Conference in Albuquerque that year.  Claire had never been to the Southwest, so off we went.  It was the perfect first Spring Break trip.  Claire wanted to visit Santa Fe, so we took the Turquoise Trail up from Albuquerque and spent the day in that wonderful city.  She learned a lot about Main Street.  We had a magical tour of Acoma Pueblo, our National Trust Historic Site.  And she even got to skip out of the plenary session where I was speaking to go with a friend to see the Albuquerque Isotopes (best minor-league name ever) play on “Homers for Heritage” day.

Next year it was Andrew’s turn.  I had a trip to Seattle planned to introduce Anthea Hartig, our then-new director of the Western Regional Office, to our partners, so to the Pacific Northwest we flew.  The reception for the event was at the renovated Sears Building in Seattle that is world headquarters for Starbucks (the first time they’d opened their doors to an outside party), and Andrew hit the jackpot.  While I was shaking hands and chatting up partners and supporters, our host took him on a basement-to-tower tour of the building.  I also discovered that he was a natural at cocktail parties, charming the ladies and talking like an adult.  And when he got tired, he went over to one of the many big chairs Starbucks has scattered all around the building, curled up, and fell asleep.  Later that trip we took a one day drive down to Mount St. Helens National Volcanic Monument – something I’d never have done on my own but it was fascinating for both of us.

Andrew has a two-week spring break, so that same year we went down to James Madison’s Montpelier, our National Trust Historic Site in Orange, Virginia, for a day trip and a hard hat tour of the restoration of the mansion.  Mike Quinn and his staff were incredibly generous in answering a sixth-grader’s questions, and I often wonder if that was the impetus for Andrew’s love of architecture.

Claire was up again for seventh-grade and had always wanted to see San Francisco.  I scheduled my first-ever visit to Cooper-Molera Adobe in Monterey to see first-hand a proposed project at this National Trust Historic Site.  We also met with the director at our other California site, Filoli, and had an all-around marvelous visit to the west coast.  (I have wondered if this was the trip that eventually led to Claire’s pull to California and her acceptance at Pomona College.)  We stayed at the Fairmont Hotel (getting a staff rate at our Historic Hotels of America was another key part of the trip) on historic Nob Hill.  We toured preservation projects in the city and Claire got her first taste of gourmet vegetarian life with a dinner at Greens.  (As I’m recognizing trends, perhaps this was influential in Claire’s later decision to become a vegetarian.)  A real treat of this trip was an invitation to a lunch at Random Ridge Winery, owned by good friend and award-winning preservation lawyer Susan Brandt-Hawley and her husband Bill.  They invited us and the National Trust Western Regional staff and their families out for a great day of food and wine.

For eighth grade, I needed to go to Denver for a series of meetings with the regional staff in our Mountains/Plains office and then on to Seattle for the National Main Streets Conference.  Andrew (he of the two-week spring break) was up, so we went to Denver.  Andrew toured the city on his own during my meetings (boasting later that he’d taken every form of transportation available to visit the sites – from light rail, to bus, to taxi, to walking).  The next day we drove to Georgetown, Colorado, to tour the Hotel de Paris, our most recent addition to the portfolio of National Trust Historic Sites.  In Seattle, Andrew went on neighborhood tours with the Main Street conference attendees before we headed home.

When they entered high school, I worried the tradition would end.  However, in their freshman year the twins came up with a scheme so both could go!  I had work in Boston that year and Andrew and Claire were both eager to go to the Northeast.  Claire agreed Andrew could join us so we could “see a few colleges along the way.”  I did my work in Boston (while Andrew and Claire explored the city on their own…things were changing), and then we headed west, stopping at Concord for a tourist visit (see the shot at left) and then out to Chesterwood for meetings with the head of our site advisory board.  And yes, we stopped to make our first visits to potential colleges.

The “Daddy’s world” tradition really ended with the sophomore and junior trips, and we dropped the work-related aspects of our spring break tradition.  All three of us went to Tennessee during the sophomore year to visit with family, and last year we became serious with the college visits.  Claire and I went to Southern California where Claire first visited Pomona College.  She heads back this fall as an incoming freshman.  When we returned to the east coast, Candice and Andrew joined us and we made Andrew’s first visit to Brown University, where he’ll enroll this fall.  So even with the changes, spring break trips continued to have a special resonance for us.

All of this is a VERY long preamble.  As Andrew and Claire approach the end of their senior years in high school, we decided on a trip to New York City for spring break – a place we’d never visited as a family.  We’ve been in the city the past three days on a wonderful visit that, while personal, still resonates with trips from the past.

Traveling with family takes you to places you wouldn’t normally visit.  Dylan’s Candy Bar, for instance, or the 8th floor of Saks (where the express elevator takes you to the women’s shoe section – a party place complete with thumping music and champagne that has its own zip code!)  But traveling with adult children also let’s you enjoy fine dining (a fabulous meal at Blue Hill) and the theatre (where we saw the New York production of War Horse, a show I was lucky enough to see last year in London).

And while this wasn’t a work-oriented trip, we still saw some great preservation work.  On a terrific tour of the Empire State Building, the project manager told us of the restoration of the lobby (a 2010 National Trust Honor Award winner) and the building’s incredible sustainability effort (which captured the attention of Claire the environmentalist and Andrew the preservationist). 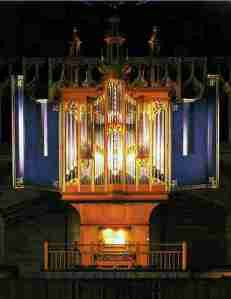 We saw the work of some old friends from little ole’ Staunton, Virginia, when we visited the beautiful Taylor and Boody organ at St. Thomas on Fifth Avenue. It is also great to see the family live out their passions in the city.  Andrew went to an Evensong at St. Thomas.  Claire has worked hard not to take “tourist” photographs as she’s captured the city on film.  (Yes, she is old school.)  Andrew and I went for a walk on the High Line this afternoon, to scratch his urban planning itch, and we all made a pilgrimage to Greenwich Village to pay homage to Jane Jacobs.  Candice has found great food offerings for every occasion (including a neighborhood bistro, Serafina, this evening).  In my love for history, I heard that the 100th anniversary of the tragic Triangle Shirtwaist Factory fire was being honored on Friday.  Later in the day we walked by the demonstration/remembrance as we visited Greenwich Village.

We are living in the moment…trying not to think about future Spring Breaks when the children are in college (and may not want to learn more about Daddy’s world).   Thank God for traditions that live on. Here are pictures from this year’s trip to New York City.  Enjoy. 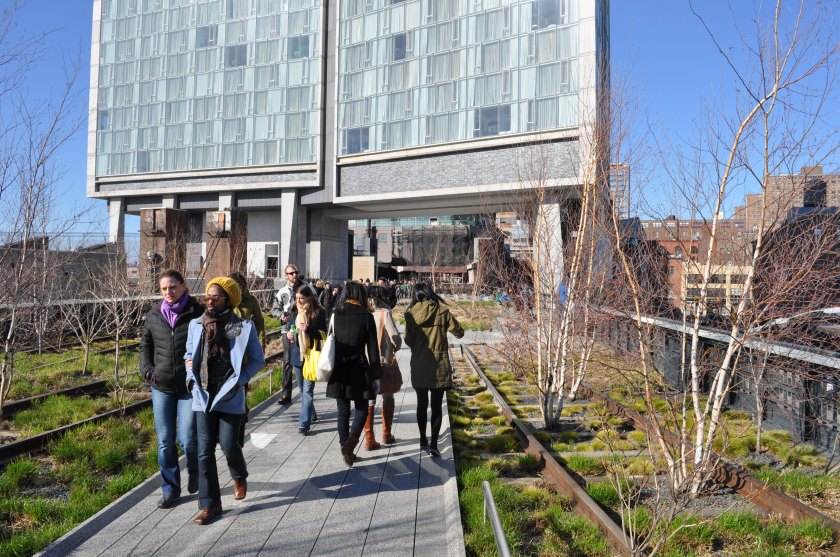