“I believe in the Church of Baseball.”

So begins Annie Savoy’s opening monologue in the movie Bull Durham.  And after going through all the religions she has tried, comparing baseball to sex, and talking about bad trades (“Who can forget Frank Robinson for Milt Pappas for God’s sake”) she ends up with:

It’s a long season and you gotta trust. I’ve tried ’em all, I really have, and the only church that truly feeds the soul, day in, day out, is the Church of Baseball.

Today I needed the Church of Baseball, and it didn’t fail me.  Oh, I did get up and go to the 8 a.m. service at my other church…especially since we were meeting our new rector after an interminable period of transition.  But I’ll freely admit that I went to the cathedral at Nationals Park today to feed the soul.

The Nationals have been on a tear.  Heading in to the home finale, they had won 11 of 14, including sweeps on the road of the Mets and the Phillies.  Tom Boswell had a column in today’s paper warning readers “not to trust September baseball.”  But then he goes on to talk about why this is the most hopeful September in the short history of the franchise.

Candice sent me off to the game with her blessing, saying, “Don’t think of my concussion or anything else…..just savor the game.”  I stepped off the train at 11:30 a.m. – a full two hours before game time – picked up a good seat, grabbed my free “Strasburg Strikes Again” t-shirt, and stopped to watch some batting practice.  I thought it might be a good omen when only two Braves were able to reach the seats.  I lingered over lunch watching the season’s highlights on the big screen and settled in to my seat about 15 minutes before the game began: just enough time to set up my score card.

Score cards are my prayer book in the Church of Baseball.  The historian Doris Kearns Goodwin once told my daughter and me at a book signing that scoring baseball – and then retelling the game each night to her father – was how she learned to be both a historian and a story-teller.  A fan saw my iPad today (I had brought it to read the New York Times while riding on the train) and asked if I was scoring the game there.  “Nope,” I replied.  “I do it the old-fashioned way – with paper and pencil.”

Today’s game was simply sublime – a fact I can recount by looking at my score card.  There was a big crowd – close to 40,000.  The Braves needed this game to hang on to their slim and diminishing lead in the wild card race.  The Nats were starting yet another of what now seems like an endless supply of good young pitchers:  Ross Detwiler.  It was the rubber game of the series.  The sky was overcast yet never threatened.  The crowd was “into it” right from the beginning.

Detwiler was untouchable until the third, when the Braves first hit rattled him and he proceeded to lose the plate.  When you throw four balls to the pitcher who is trying to give you an out by bunting, you’ve lost control.  But after filling up the bases, he got a short pop fly out in foul territory, a short fly to right where Jonny Gomes showed off his arm and kept the runner at third, and then he got future Hall-of-Famer Chipper Jones to bounce to his counterpart at third, Ryan Zimmerman, who tossed to second to get out of the inning.

I decided about this time that I needed some peanuts to go with my coke, and soon I had shells all over my score card.  But I cleared them off when Wilson Ramos – who will one day tell his kids that he replaced future Hall-of-Famer Pudge Rodriquez as the Nats starting catcher – hit a solo shot in the fourth that jumped over the left field fence (just to the right of where I’d been sitting for batting practice).  1-0 Nats.  I’d gone about 3 hours and was starting to breathe.

1-0 was all Detwiler would need.  He finished six strong innings and the bullpen was lights out.  Henry Rodriquez was the most electric, touching 100 and 101 on the radar gun with regularity, as he made short work of three Braves in a three-up, three-down inning featuring three strikeouts (one being by a fouled third strike bunt when David Ross realized he couldn’t get his bat around to keep up with that fastball.)  The bottom of the seventh featured more fireworks.  After a Zimmerman single, Michael “The Beast” Morse – who may be the cheapest steal in recent history when he was acquired for chump change from Seattle – hit a blast over the right center field scoreboard to make it 3-0.  The fans – in a classy “thank you” for Michael’s fabulous season – screamed for a curtain call.

The Braves looked over-matched all day,  but never so much as in those last three innings.  Rodriquez finished off his last victim with an 84 mph change up.  How do you deal with that after 101?!  Tyler Clipper came in for a very tidy 1-2-3 top of the 8th.  And then in the ninth, rookie closer Drew Storen did the same – with a little help from an incredible pick, turn, and throw by Zimmerman against Dan Uggla.  About time to give that guy another Gold Glove.

As Storen headed in from the bullpen to pitch the ninth, the sun came out.  I knew I was in church.

After Danny Espinosa threw to Chris Marrero (two more youngsters)  for the final out, we all reveled in what we’d just seen.  If the Nats can win their final series against the Marlins, they’ll finish with their first winning season since coming to DC.  And they are now playing consistently like a big-league club that’s on its way up.

I wanted the soul to take in all it could.  I stayed and finished filling out my score card (and another fan stopped by and said, “That was a fun game to score.”)   I talked to the usher for our section.  I watched about 10,000 kids run the bases in the last of that Sunday ritual for 2011.  I lingered.

And then I joined what was left of my fellow congregants on the metro, all of us dressed in our Sunday finest. (Mine is a red t-shirt with a curly “W” on the front and “Strasburg #37” on the back.)

I returned home to hear about Candice’s afternoon, where two sets of friends stopped by.  The Pearsons – our very good friends from Staunton – came by to check up on the patient.  And the Eucharistic minister from church came by to give Candice communion.  I know Candice enjoyed that, and I was pleased to be at a  hopeful St. Albans this morning.  But it is hard – day in and day out – to beat the Church of Baseball for at least some parts of my soul.  Today there was simply no comparison.

“Wait Till Next Year” indeed! 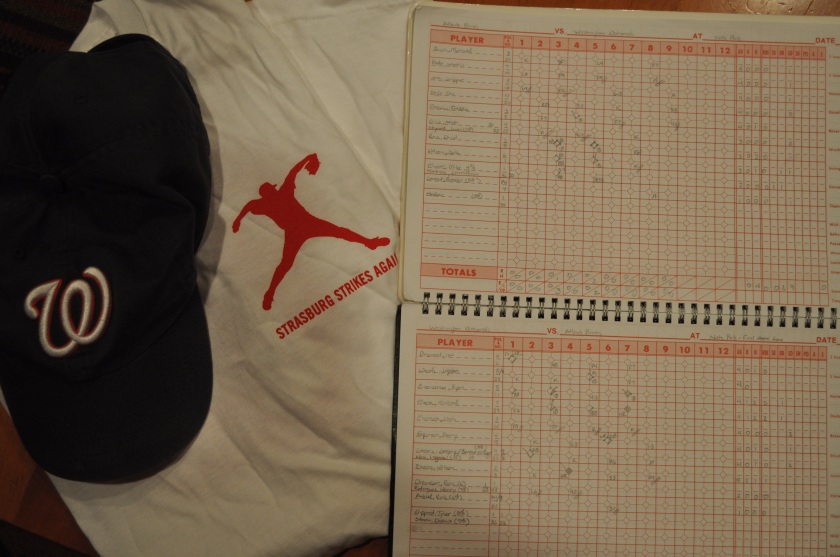