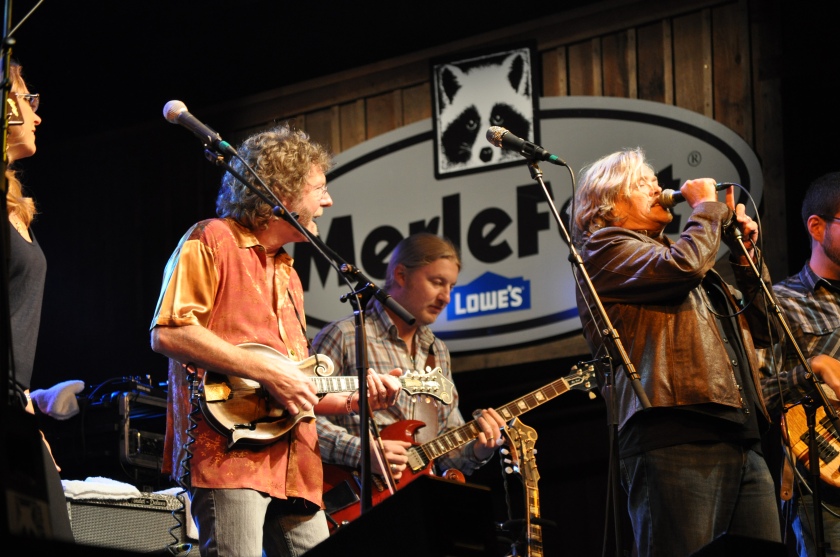 At 12:30 on Friday afternoon, I thought I had seen the best show I was likely to catch on Day Two of Merlefest.

And I’m here to be the first to admit it.

The day started strong.  As I expected, The Steel Wheels had a huge crowd on hand at the Americana stage for their morning set, and they didn’t disappoint.  The Shenandoah Valley band – at both this set and a later gig at the Creekside Stage – played to large and enthusiastic crowds.  I heard more than one person turn to their friend/partner/spouse and say, “These guys were incredible last night.”

Spider Wings (“When you got too much, you don’t got anything”…or something like that) was my favorite, but they had so many good tunes coming out of them all day long it was hard to pick out just one.  Lead singer Trent Wagler’s piece about his grandfather’s response to Alzheimer’s – entitled Can’t Take That Music From Me – was lovely.

The juggling of schedules began almost immediately, as I had to leave The Steel Wheels set before it was over in order to catch the James Nash Making the Acoustic Guitar Rock workshop.  But am I glad I did.

Nash (above) is the front man for one of my favorite groups, The Waybacks, and he’s a monster guitar player.  On my Facebook page today I posted the status that “When I grow up, I want to be James Nash…He’s incredibly talented, creative, funny – and looks like a rock star to boot!”  He put on a 45-minute clinic on how to bring a rock attitude to acoustic guitar playing.  Rule #1 for learning to play fast:  don’t practice while watching the ball game.  Guilty!  Nash, playing a beautiful Santa Cruz 1990 OM guitar, worked through a lovely arrangement of the Beatles tune In My Life, showed how to cheat to get a string bend when you don’t want to rip your fingers like Stevie Ray Vaughan, and had the entire auditorium in the palm of his hand.  He even ended with some Grateful Dead, and told the crowd that they probably wouldn’t be hearing much Dead tomorrow afternoon at the Hillside Album Hour.

Nash – and just about everyone else in the auditorium – left immediately and headed to the Hillside Stage for a “virtually unrehearsed” show that Nash says you can only do, “When you  have no shame (if you fail).”  Playing with The Greencards’ Kym Warner and Jens Kruger of The Kruger Brothers, this was the “international” show – from Australia and Switzerland respectively  – and the entire band came out rocking on Calling Elvis and their Earl Scruggs tribute Too Late Now.

Kruger (above) is an amazing banjo player who kept with Nash and Warner lick for lick (even when he mouthed, “I don’t know this tune” to Warner’s lightening fast Talking With Zeus instrumental.  When the Hillside crowd finished singing the old Ray Charles song Hallelujah, I Love Her So with the band, I thought, “It doesn’t get any better than this.”

Did I mention that I was wrong?

I drifted in and out of sets during the afternoon, catching bits of Peter Rowan and The Free Mexican Airforce, the Steep Canyon Rangers (above – loved their Tennessee Blues), The Greencards, and a few others. But I went outside the festival grounds late in the afternoon in search of something green to eat!  (Don’t get me started on limitations of the Merlefest food tent.)

I returned in time to catch most of the wonderful set (above) by John (The Cow) Cowan, song-writer extraordinaire Darrell Scott, and Doobie Brothers founder Pat Simmons.  They shared songs they had each written, sang covers (including the second Beatles sighting of the day), and ended with a spirited version of the Doobie classic Without Love.  (It was great to hear Simmons play those opening riffs on an acoustic guitar…and they sounded so perfect!)

Then the night really got interesting.

Bela Fleck and the Original Flecktones lineup took the stage to great anticipation. Roy “Futureman” Wooten (at the top of the post) with his drumitar, brother Victor Wooten on bass, and Howard Levy – one of the world’s great harmonica players – make up that original lineup, and they took the crowd on an hour-long journey through time and space (as Futureman would probably describe it).  I was always sorry to see Levy leave the band in the 1990s, and his return gave the creative spark to a group of musicians that didn’t need that much encouragement to try new works.  It was an amazing evening, made all the more memorable when Fleck sat down with just his acoustic banjo and played a medley of tunes “For Earl” that began with a simply beautiful You Are My Flower (which Earl always played on the guitar) and ended with The Ballad of Jed Clampett (and I believe some Dear Old Dixie thrown in the middle).  Heartfelt and lovely.

Sam Bush has played at each of the 24 previous Merlefests, and you figured he had something up his sleeve for the 25th anniversary.  The Sam Bush Band opened with John Hartford’s Vamp in the Middle (a terrific tune) and went off on an exploration for the old NGR instrumental Crooked Smile.  After a few songs, Sam said, “I want to be the first person to welcome these two folks to the Merlefest stage,” and proceeded to welcome Derek Trucks and his wife Susan Tedeschi of the Tedeschi Trucks Band – Saturday evening’s headliner.  The band kicked off Bell Bottom Blues – a song played by Derek’s namesake Eric Clapton – and the night, which was already special, turned magical.  Bush played a perfectly serviceable electric lead break, but Trucks stepped forward and showed what the #16  and youngest member of the Rolling Stone list of the Top 100 Guitarists of All Time sounds like.  God, how does he get that sound out of his guitar?!

Next came Gimme Shelter, a “song by a band that has never played Merlefest.”  Susan Tedeschi’s vocals were incredible and the mountains behind the Watson Stage were beginning to rock.

As if that wasn’t enough, Bush then called out former New Grass Revival band mates Bela Fleck and John Cowan for an impromptu reunion and — as has been happening throughout the weekend — led off a tribute to the late Levon Helm. Bush, Cowan, and Tedeschi traded verses on Up on Cripple Creek, but the entire crowd was singing along.  When the tune morphed into the old fiddle/banjo standard Cripple Creek, banjo wizards Fleck and Scott Vestal (below) traded licks and choruses.

Incredible musicians playing incredible music together…often in new juxtapositions that take them out of their normal zone. When that set was over, I had to leave.  I stopped by a packed Dance Tent to catch just a bit of Donna the Buffalo but what I really wanted was to get in the car, drive those North Carolina country roads back to my hotel, and savor an amazing day.