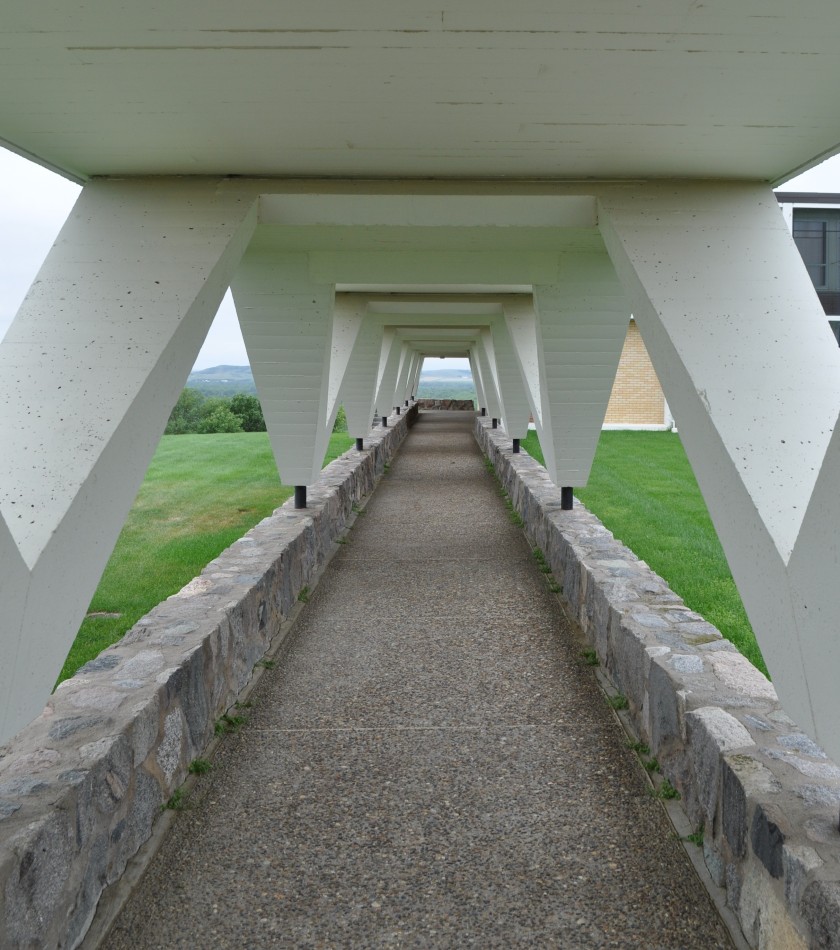 Some of the most amazing finds on the road occur in the most unlikely places.

When my colleague Jenny Buddenborg learned I was traveling cross-country with Claire – and taking in North Dakota in the process – she directed me to one of America’s hidden gems:  a college campus in Bismarck, North Dakota designed by Marcel Breuer, one of the masters of Modernism.

The University of Mary is a small, Catholic school located on rolling hills about 7 miles outside of Bismarck. The university’s website picks up the story from here:

In the 1950’s, when the Benedictine Sisters of the Annunciation founded their original priory and later planned for the first campus buildings for Mary College, they asked Breuer if he would create the architectural designs. To their delight he accepted and conceived expansive structures of native prairie stone and exquisite concrete shapes, notable for their interplay of light and shadow.

Breuer called it his “jewel on the prairie.”  After an hour touring the campus this morning, I wouldn’t disagree.

Thanks to Jenny and the good efforts of Amy Sakariassen, Elizabeth Gross, and Neal Kalberer of Bismarck, I met Jerry Anderson at the foot of the beautiful Breuer-designed bell-tower this morning for an hour’s tour of the campus. Jerry has worked at the university for more than 25 years and brings a design eye to his tours of the Breuer buildings. He was able to explain the design philosophy behind the campus, and also added fascinating details (such as the fact that Breuer placed the cut-out cross in the bell tower so that at noon on Christmas Day the sun shone through and placed a cross at the door of the main chapel).

We began our tour in the main chapel. The impact is immediate and stunning.

The native fieldstone that Breuer employs throughout the campus is painted white on the walls of the chapel.  The beautiful stained glass on the right, as you look at the altar, captures the rose colors of the morning sun…

While the opposite window captures the golden glow in the afternoon.

Everywhere one looked, Breuer created spaces with wonderful light and shadows that brought the outdoors into the building and framed the wonderful natural vistas available on campus.

The tour had to end much too soon, so we could get on the road.  But in a short hour, I came away incredibly impressed with the vision – of both the Sisters and Marcel Breuer – which is maintained to this day.

Thank you Jenny, Amy, Elizabeth, Neal, and Jerry. A fabulous way to end our time in North Dakota…with a jewel of the prairie.