As I post this, the clock on Spring Training Countdown (motto:  Winter Bad. Baseball Good.) reads:  4 days, 7 hours, 37 minutes, 7 seconds.  It is clear I don’t have much time to get in shape for the season!

My own personal spring training generally consists of reading a new baseball book and re-watching Bull Durham (best baseball movie ever).  However, our tape/CD player is broken (I know, we’re old school), and so I had to improvise and instead read two baseball books.  It is tough duty, but sometimes you’ve got to do what you’ve got to do to get into shape.

I began with 2015’s Big Data Baseball: Math, Miracles, and the End of a 20-year Losing Streak by Pittsburgh writer Travis Sawchik. 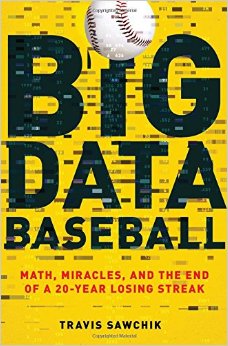 This is a terrific book about how the 2013 Pittsburgh Pirates, stumbling along in a 20-year losing streak (remember Sid Bream and Barry Bonds and Skip Carey’s classic 1992 “They may have to hospitalize Sid Bream” call) turned around their fortune as a baseball club.  The Pirates did it using big-data strategies, undervalued players, a leadership team willing to try new things, and an organization-wide commitment to integration of old-style and new-style insights to make the playoffs.

This book will most often be compared to Moneyball – which is a terrific book and a good baseball movie.  But it is different in a number of ways and well worth the read.

Sawchik happened to take on the Pirates beat for the Pittsburgh Tribune-Review in 2013, and so he doesn’t have the tone of a long-time homer.  He says that he didn’t get the idea for the book until late in the season, so while he was on the beat every day, he went back and had to research the real reasons for the ballclub’s turnaround.  He includes a nice epilogue about the 2014 season, when the Pirates returned to the playoffs.  And while Moneyball focuses on Oakland A’s General Manager Billy Beane, the real story of Big Data Baseball and the turnaround in Pittsburgh is the way that the GM and data analysts were welcomed by old-style manager Clint Hurdle and completely integrated into the overall organization. 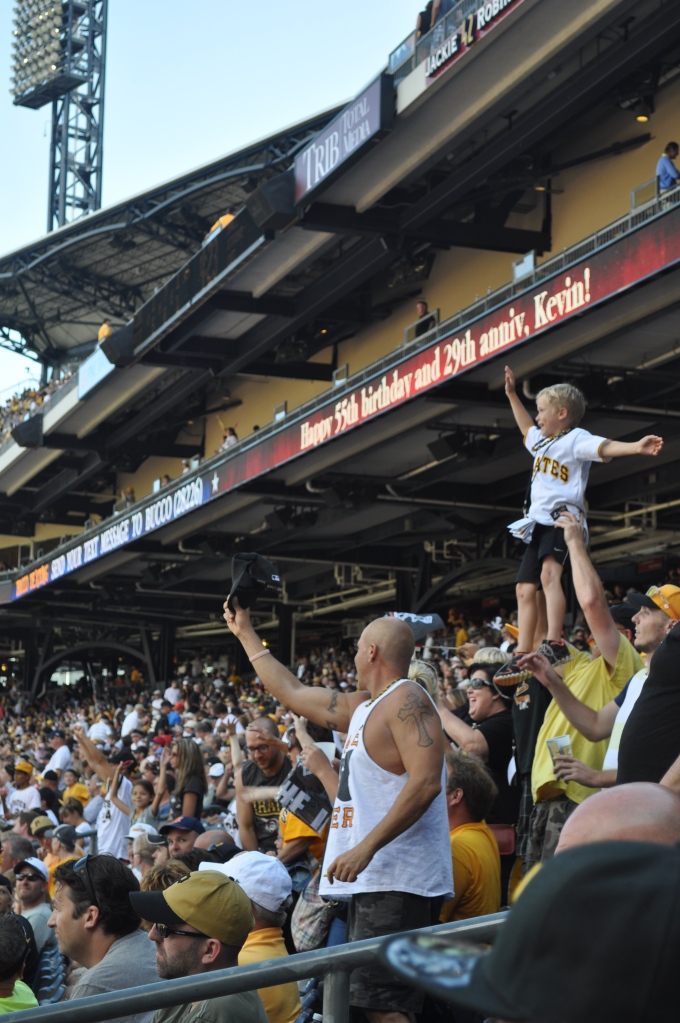 We happened to attend a Pirates game in 2013 in the middle of the pennant race, and it was a magical day of baseball.  Big Data Baseball brought back those memories.

There are so many parts of this book to recognize.  The pressure on Hurdle as the season began.  The ability of the data gurus to turn their analysis into understandable and visual graphics that helped sell their findings to the old-school guys.  Wonderful sections on pitch-framing and the undervalued skill of catcher Russell Martin.  The use of big data to develop secretive preventive medical practices that resulted in the fewest days lost to injuries in 2014.  (Are you paying attention, Washington Nationals?)  But I’ll focus on two.

The “Magic Act” chapter has a great section on the 2013 Wild Card play-in game.  Here’s where Sawchik’s baseball writing skills are clearly evident.

In the bottom of the 2nd inning, Cueto made the first mistake of the game.  He left a pitch out over the plate that late-season acquisition Marlon Byrd belted for a home run.  The crowd noise picked up in ferocity as the ball was swallowed by the crowd and Byrd began his trot around the bases.  A new chant originated at some ground zero somewhere in PNC Park and grew in volume to a tidal wave.  In a taunting, haunting crescendo, forty thousand chanted, “Kwaaaaayyyy-toe…Kwaaaayyyy-toe,” toward the center of the diamond.  Under this avalanche of noise, with the misfortune of having a two-syllable perfect-for-chanting surname, Cueto was thrown a new game ball by the home-plate umpire.  Cueto literally dropped the ball.  Seeing this, the crowd went into a frenzy, believing the dropped ball signaled that they had got inside the head of the Reds starting pitcher.  On the very next pitch, Cueto allowed a fastball to leak out over the plate.  Waiting for it was Martin, who smashed the ball into the left-field bleachers for another homer.  The crowd was euphoric.  Twenty years of pent-up misery was released that night, manifesting itself in a sound that felt like being at the bottom of a waterfall.

In “A Perfect Circle” Sawchik recaps the 2014 season, which again saw the Pirates make the playoffs.  And here, he focuses on a key insight:  the “continued focus on marrying their new-school and old-school personnel….The Pirates always wanted to have an (data) analyst in the clubhouse to counsel, making them the first known major league team to have a quantitative analyst among its traveling party.”

On that celebratory night in Atlanta, as the party wound down and the champagne was exhausted, Pirates second baseman Neil Walker found Mike Fitzgerald standing quietly in the corner of the clubhouse away from the epicenter of the celebration, where the players and coaches were massed.  Walker took a Budweiser from an ice-filled bin and walked toward Fitzgerald, dousing the analyst with beer.  Fitzgerald, the math genius who had never played professionally, and Walker, drafted out of high school and having spent years in the minors before emerging as an everyday major league player, laughed and celebrated together.  The dichotomy between them and yet their acceptance of each other was a snapshot of how far the Pirates had come in creating a culture of respect, a culture that would allow important data to be embraced.

This book will delight baseball fans (of all teams) as well as those looking to understand how important corporate culture, communication, and values are to success.  Highly recommended!

Where Nobody Knows Your Name

The second book – by a better known writer – is interesting,  but to my mind not as appealing to a broad audience.  Where Nobody Knows Your Name:  Life in the Minor Leagues of Baseball by John Feinstein is an account of the 2012 International League season – one of baseball’s two AAA minor leagues.

Feinstein is a good storyteller, and this book is full of good stories.  By focusing on seven players, an umpire, and a manager, Feinstein shows that being at a level just below the majors can have a variety of effects on different people. Some seem to know they are just going to be called up for a cup of coffee in the show, while others have tasted big league glory (Nate McLouth) only to lose it and then find it again.  Feinstein talks about the Durham Bulls of Bull Durham movie fame, and the current team – which was managed in 2012 by Charlie Montoyo playing in a state-of-the-art minor league stadium that didn’t bear any resemblance to the ramshackle yet lovable field of the 1980s.  He also sprinkles in cameos by players on the way up (Bryce Harper) and players on the way down (Mark Prior).

Here’s how the book ends.

“I know I’m going to walk into the clubhouse and there will be a locker with my name on it and a uniform,” Elarton said just before heading south and east once again.  “I’m still a baseball player.  Honestly, I can’t think of anything much better than that.”…Before they take off their uniforms for the final time, they find out a truth that was eloquently captured in the words of longtime pitcher Jim Bouton in the closing words of his seminal book, Ball Four.

“You see,” Bouton wrote, “you spend a good piece of your life gripping a baseball and in the end it turns out that it was the other way around all the time.”