View of the Umbrian landscape from the edge of Orvieto

Candice and I decided early in our stay to take a day trip outside of Rome once each week during my sabbatical. A colleague had sent along a blog post on the 10 best day trips from Rome, which whetted our appetite, and with the prospect of seeing one of Italy’s best cathedrals, we jumped on a train last Tuesday to visit the Umbrian hill town of Orvieto.

What a marvelous decision!

75 minutes after leaving Rome, we pulled into the Orvieto train station on a beautiful, sunny spring day.  My first thought was about how we would navigate getting up the 984′ rock plateau that serves as the base for the town.  But immediately across from the station was a funicular station, and my spirits soared.

Let me pause for a second to say how much I love funiculars (or incline railways).  When we were young, my father (the TVA engineer) use to take us to see old and new engineering projects, and one of my earliest recollections was taking a small funicular to the power house at Great Falls (downstream from the Great Falls Dam on the Caney Fork River). We also took the Lookout Mountain Incline Railway on several occasions, and I now always take the opportunity when I find one.  (It turns out that the father of the engineer of Great Falls dam designed the Lookout Mountain Incline, but I cannot find any mention of the builder of the one at Great Falls.)  Angels Flight in Los Angeles is a special one I remember riding several times on a day of exploration in the city back in 2000 (alas, it is closed at the moment), and Pittsburgh still has two operational funiculars.

But back to Orvieto.  The funicular provided spectacular views of the landscape we had ridden through on the train, and about 90 seconds later it deposited us in the city itself.  We immediately set out on foot to find the cathedral.  When guidebooks call something “the best” or “one of the best,” I find my tastes and interests often differ.  This wasn’t the case with the Duomo di Orvieto.  As soon as the facade came into view, we could tell this Italian Gothic gem was going to be worth the trip.

After eating our take away lunches from the academy on the steps of the cathedral, we began to explore this magnificent facade.  13th and 14th century bas-relief panels frame the contemporary bronze doors, designed by Emilio Greco.

Main door, bas-relief panels, and mosaics at the Orvieto Duomo 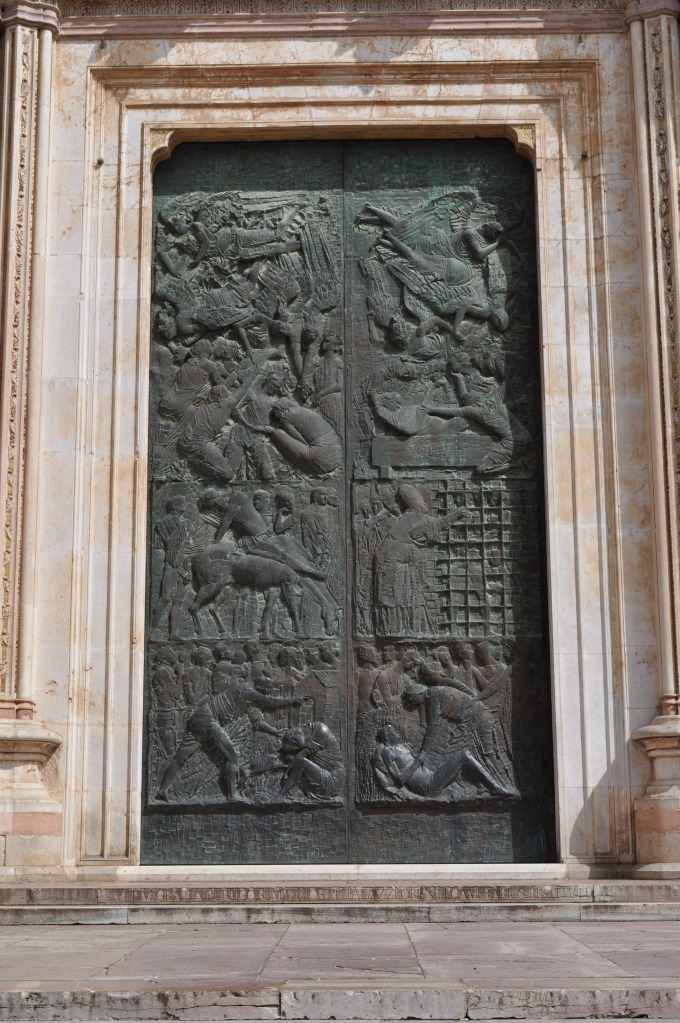 Bronze doors to the cathedral by Emilio Greco

The mosaics from the 14th and 19th centuries are remarkable features of the facade, and I was only disappointed that I had left my longer lens at the apartment to lighten the load in my backpack.

While the facade is often cited most frequently in references to the Duomo, I found the interior to be equally captivating.  The scale and volume of space first catch your attention upon entering.

Because we were visiting on a Tuesday, the groups of tourists were rather light (especially after one school group quickly worked its way through the high spots and then exited).  We spent over an hour exploring this wonderful space, from the fragments of the frescoes, to the highly decorated Chapel of the Corporal, to the altar and monumental organ, designed by the principal sculptor and architect of the cathedral work-yard in the 16th century.

Fresco fragments from the 14th and 15th centuries, below an alabaster window

The Chapel of the Corporal

The main altar at the Orvieto Duomo, with reproductions of the 14th century choir stalls and a crucifix from the same period 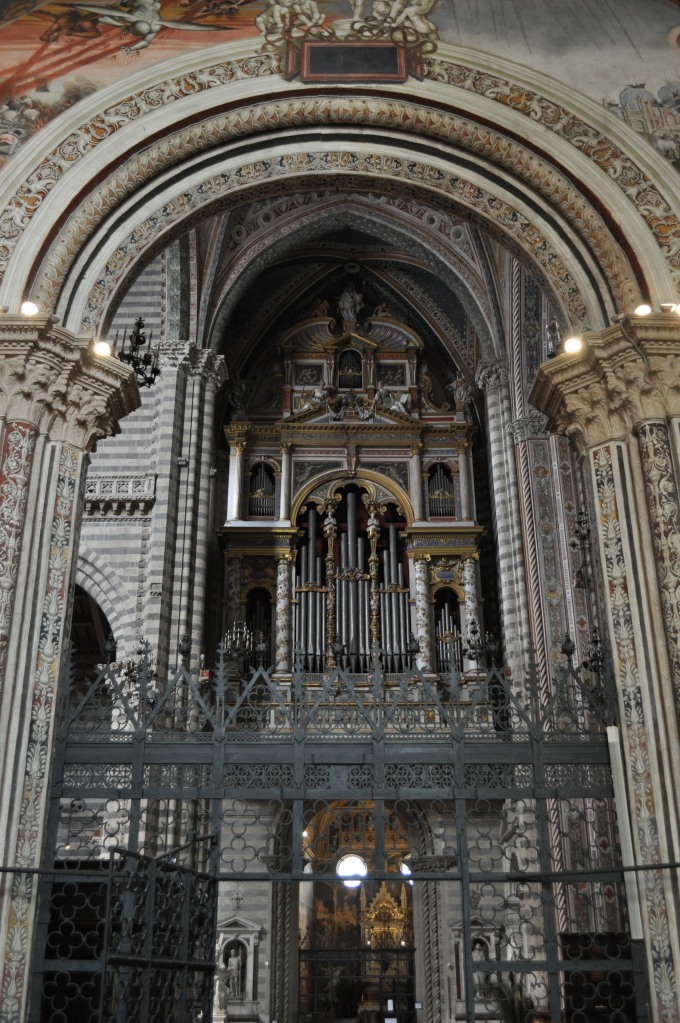 The 16th century organ case, as seen from the Cappella Nova

We ended our tour of the cathedral at the 1579 Pietà by Ippolito Scalza.

For the remainder of the day, we wandered the streets of Orvieto, going down the countless small streets to find other churches, winding staircases, and piazzas.  We walked to the edge of the town to marvel at the view of the countryside.  And – of course – we shopped and ate in the many small stores and cafes along the way.

A typical street in Orvieto 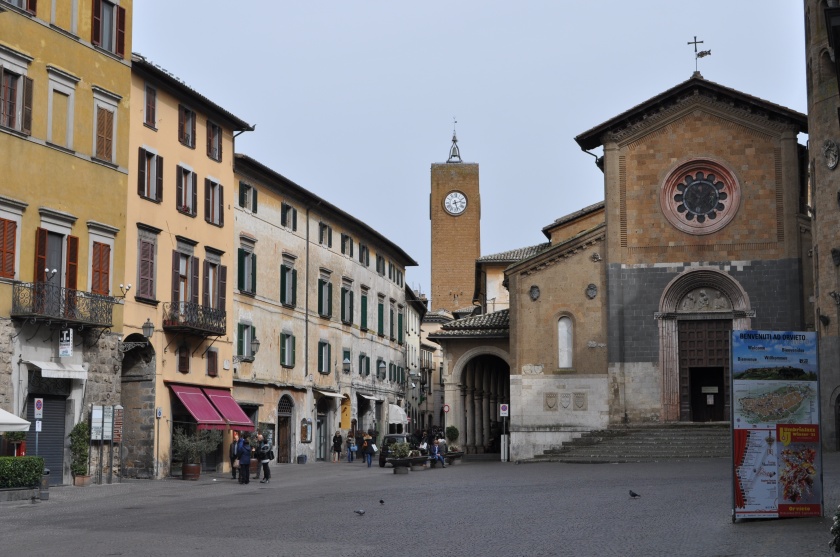 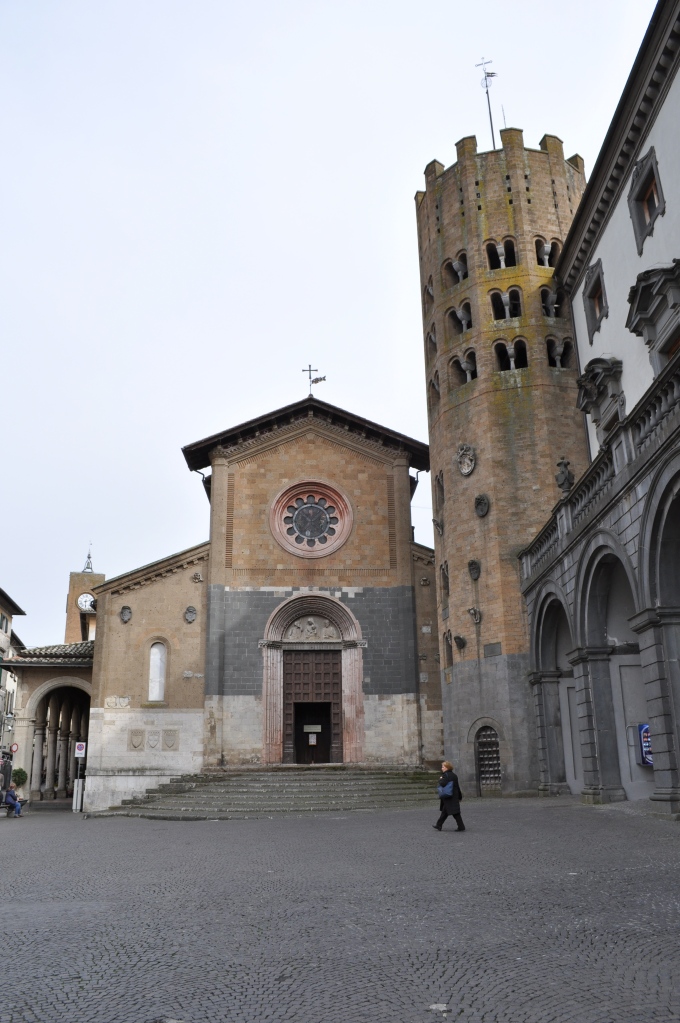 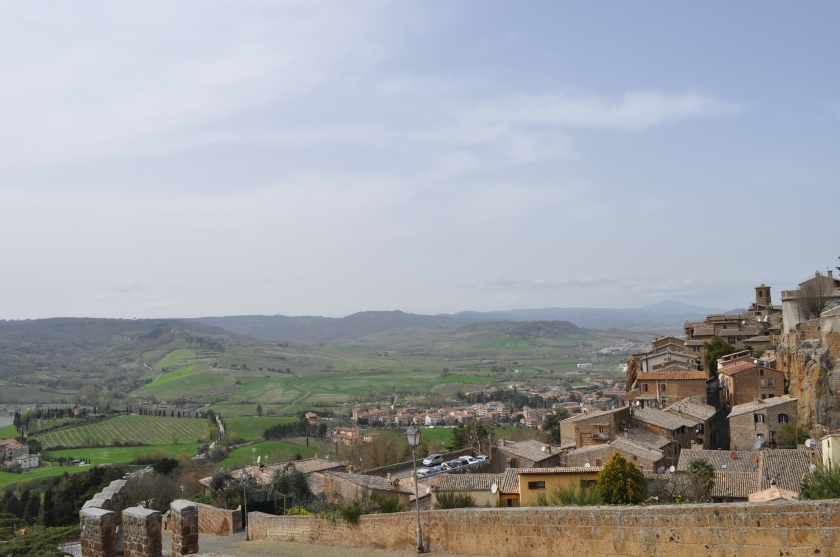 The countryside of Umbria, as seen from San Giovenale at Orvieto’s western edge

Late in the afternoon we stopped in a cafe for some local wine and bruschetta, while striking up a conversation with three college-age young ladies from Boston’s Gordon College who were studying in Orvieto for the semester. They talked about their experiences in this wonderful small city, and we thought of our twins’ time abroad.  Candice and I could picture them in similar cafes in other cities, catching wi-fi and nursing coffees and tea to try and extend their experiences of travel.  As the night – and temperatures – fell, we were happy to board our train back to Rome yet were somewhat saddened to end a lovely day in Orvieto.