During our first week on Deer Isle in Maine, we have jumped enthusiastically into the local food and music scene.  Sometimes the outing was planned.  At other times the opportunities were serendipitous.  But isn’t that how we are to live?

This is one long “Observations from the road…” post, which could be titled “My, Maine has so much to offer in locally sourced food and music.”

Our first two encounters with food and live music were unplanned yet set the stage for our visit.  Upon our arrival at Pilgrim’s Inn last Sunday evening, we saw someone carrying a guitar into his cabin.  After meeting Richard Perlmutter and his wife Judy the next day and determining that he did – in fact – have a guitar with him, we agreed to meet up after dinner on Monday for an impromptu jam session.

Serendipitously, we found that the Whale’s Rib Tavern was open for dinner at the Inn on Monday (we had mistakenly thought it was closed both Sunday and Monday evenings), so we quickly booked a reservation and had the first of what has become a string of terrific offerings over this past week.  I had the halibut, which was so wonderfully tasty, before we joined Richard and Judy in one of the cozy gathering places at the inn.

Now, had I known that Richard has won multiple Grammy and national music awards, was the founder of the remarkably successful Beethoven’s Wig choral group, and has played professionally his entire career, I might have been less inclined to offer to sit down and play a few folk and popular tunes.  But as far as I knew when we started, Richard was this very easygoing and friendly person who had a nice little parlor guitar and a Martin mandolin that he was carrying with him on a “tour that’s more vacation than tour.”  To bring you up-to-date, here’s how Richard’s website describes his work:

Beethoven once said, “If my music had words it’d be a lot more popular.” His wish has come true!  Modern day “co-writer” Richard Perlmutter has added lyrics to Beethoven (and Bach, Mozart, et. al) that have propelled the works of the old longhairs to the tops of the charts, and introduced them to new audiences everywhere.

Despite the fact that he’s forgotten more music than I’ve ever known, the four of us – joined about halfway through by a family visiting from Ireland – had a delightful time playing tunes and trying to remember lyrics.  (Lesson #1:  Always bring a fake book.)  Over the course of our first 36 hours on the island, we had met the man who produced the first Nickel Creek album (when they were ten years old), played Irish tunes on the mandolin for a gentleman who loves to attend sessions back in Dublin, and had the first of several wonderful meals.  What could be better?!

Deer Isle has limited restaurant offerings, but there are several that are very, very good.  Whale’s Rib Tavern has never disappointed – for either breakfast or dinner – and we heartily recommend it for those visiting the Downeast section of Maine.  Everything is locally sourced, and the menu offers just enough for everyone to find something appealing.  We have discovered a number of favorites, but the Blue Hill rope raised mussels, roasted garlic cream, and fried leeks (especially those friend leeks) are extra tasty.

Our second evening of combining exceptional food and music came about because Candice had spent time online to scope out things to do around the island.  Stonington has both an excellent farm-to-table restaurant that overlooks the working waterfront and an active music venue across the street in the historic Opera House.  But before we made it to either one on Friday – when we had reservations – we discovered a wine tasting at Water’s Edge Wines that helped jump-start the evening.

Living in the moment, we took the time to chat with the owners – Ken and Bette Kral – while sampling some excellent wines and cheeses.  Along the way two ladies joined us at the shop and in the course of our conversation we found they – like us – were heading to Aragosta for an early dinner.  Hillary and Yvonne had been classmates in a New England boarding school some 25-30 years earlier and were spending the weekend together to catch up and enjoy Deer Isle.  Over the course of the next 24 hours we ran into them three times (it is a small island) and by the time they left to head home on Sunday we were sharing life stories and hugs in the parlor of the Pilgrim’s Inn.

Lobster ravioli, a signature dish at Aragosta, after I’ve taken a bite or two!

The daughter of a gardener and a chef, Aragosta’s Chef Devin Finigan grew up in the kitchen and the garden in nearby Vermont.  The offerings at Aragosta are wonderful.  Candice and I split a serving of Blue Hill Bay oysters, the signature lobster ravioli and the Old Ackley Farm duck (with house gnocchi, confit, blueberries, Morgan Bay Farm bok choy and green coriander).  What a terrific meal, made all the more remarkable by the view out our window.

View of the Stonington harbot from Aragosta

But our Friday was not yet complete, as we had tickets to the Deer Isle Jazz Festival at the Stonington Opera House.  The opening act was a terrific group of high school musicians from the George Stevens Academy.  Then they were followed by Dafnis Prieto’s Si o Si Quartet.  Oh. My. God.  What a talented musician.  What an incredible group.

Cuban-born drummer Dafnis Prieto has received a MacArthur “Genius” Fellowship and numerous prestigious commissions and awards, all honoring the originality and craft of his work as a composer, bandleader, drummer and educator. Prieto has entered the top echelon of a new generation of artists blending Cuban and American traditions to achieve fresh aesthetic goals.

I am not generally a “drum solo” fan…but I could have listened to and watched Prieto all night long.  He was so musical, so full of energy, and yet so seemingly effortless in his playing.  Valera stayed with him on the piano and filled out the quartet sound along with Weidenmuller.  Apfelbaum’s sax work was terrific.  I was – to put it simply – blown away to be hearing this level of music in a town of a few hundred people at best.  We met a couple at the Pilgrim’s Inn the next morning – easily identified as a jazz fan by his Downbeat t-shirt – and it turns out they have been coming to the jazz festival for years.  I just love these small summer festivals that draw such incredible musicians to such beautiful – and inspiring – places.

So Saturday rolls around and once again the serendipitous meets up with the planned.  As we were pulling into the inn after lunch, I noticed a couple of guys under a tent with guitars in hand, and remembered that the community bulletin board had a notice about “bring your instrument and play” time on Saturday afternoon next to the post office.  I joined Jim, Mike, and a third player who came later, and we worked through bluegrass and country music standards for about an hour.  Jim was “practicing” for his regular gig at 7 a.m. in Stonington at the “Church of the Morning After” – a jam session with fishermen along the waterfront.  He encouraged me to join them, but I noted that 7 a.m. services were for folks who didn’t really have a “Night Before” – and we had plans.

At virtually every restaurant on Deer Isle, we’ve seen local providers, such as 44 North Coffee (a wonderful coffee roaster right around the corner from the inn), and Yellow Birch Farm.  These local providers are keeping the best chefs supplied with locally sourced food.  And Saturday night we had plans to see those two things joined at a farm dinner at the Yellow Birch Farm.

We joined 13 other new friends (an amazing seven of us from the Washington area – including three who live in the Watergate, where my offices are located, a long-time National Trust supporter, and a couple who found rooms in local houses for the Si o Si Quartet and all the other performers at the Opera House).  We began with cocktails, followed by a farm tour and a wonderful two hours of food and conversation.  Held in the 19th-century barn that is the Greene Ziner Gallery, we were surrounded by beautiful artwork by farm owners and artists Missy Green and Eric Ziner and fortified with a fresh and well-prepared dinner.  Halibut was the main course, but I was especially taken with the tomato tart and the blueberry (of course) dessert. 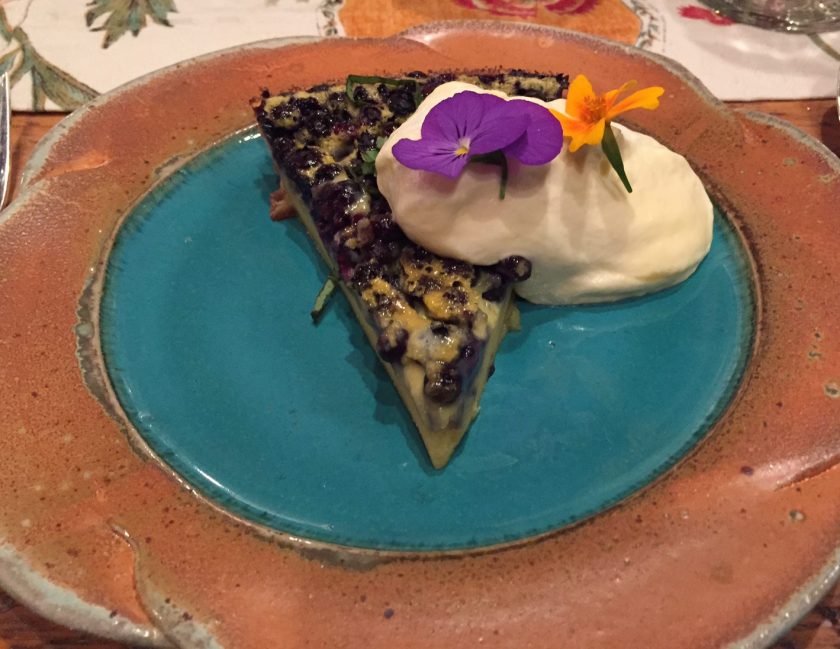 As we rolled out a bed this morning to attend church at St. Brendan the Navigator Episcopal Church (what a great choice of a saint for the Deer Isle community), we wondered what this week will bring.  But we’ve already made new friends, heard new music, and tasted some of the best of the bounty of Maine.