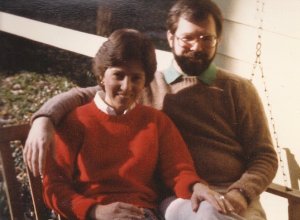 The newlyweds – poor graduate students – on our honeymoon at Prospect Hill

Thirty-five years ago tomorrow – March 20th – Candice and I started our adventure together.  I remember the first time I saw Candice.  She was coming around the corner of an office cubicle at the Georgia State Historic Preservation Office – where we’d both just been hired – and I thought, “Wow!”  (That’s a technical term meaning, “This could be interesting!”) As I got to know her over the months and years, my initial assessment was more than confirmed.

In her book Two-Part Invention:  The Story of a Marriage, Madeleine L’Engle describes the evening that her husband Hugh proposed to her.

“We went to one of our favorite restaurants in the Village, and after dinner he came home with me.  We talked.  About this, about that. He suggested that we play records, and chose Tchaikovsky’s Swan Lake.

He picked up a book of poetry off the shelf and began leafing through it, and then read me Conrad Aiken’s beautiful words:

And then he said, ‘Madeleine, will you marry me?'”

I love that sentiment of how two make something more than what we feel alone.  That is so true with Candice.  In honor of our anniversary, here are thirty-five reasons I’d do it all over again.

1. Thinks deeply about what type of wife, mother, sister, in-law, and friend she wants to be.  Then she acts out of that conviction.

2. Will go to a restaurant, taste something we both love, and come home and duplicate it for us.  How does she do that?

3.  Treats children as people. They respond to her respect with love and respect of their own.

4.  Is both romantic and pragmatic, and knows when each is the proper approach.

5.  When we were first married, I brought a habit of buying things on credit to the marriage.  Candice grew up waiting until she had cash before making a purchase.  We talked through our attitudes toward money, and then we adopted her overall approach whenever possible.  (House mortgages excepted.)  When I look at our family’s financial situation thirty-five years later, I am so glad she had the patience to work with me on financial management.  She’s also taught Andrew and Claire about the thoughtful use of money.

6.  Even in light of the previous reason, when I took a shine to several very nice guitars, and had the wherewithal to buy them, she fully supported the scratching of my Guitar Acquisition Syndrome (G.A.S.) itch.

Playing one of my Running Dog guitars

7.  Has consistently seen more in me than I see in myself.  Over thirty-five years, that’s a great confidence builder.

8.  Remembers everyone’s birthday, and sends cards, calls, and otherwise makes you feel very special…even if you don’t want to remember that you’re now 62!

9.  There have been times of misunderstandings.  All marriages have them.  Yet when one of us outruns the other, Candice will wait for me to catch up (if she’s ahead) or ask me to wait for her to get comfortable with wherever I am.

10.  We renovated two old homes early in our married life.  On the first house, we found ourselves arguing over how well I did the detail work and how slow she was in moving through items that didn’t require a lot of thought.  She had the good sense to point out that her focus made her the best person to take the paint off the baseboards, while my zeal for the big-picture meant that I should strip wallpaper to my heart’s content.  We never again strayed into each other’s territory, and it probably saved our marriage.

11. Wears “jewelry” created by Andrew and Claire in kindergarten and pulls it off as if she’s wearing the latest designer creation.  She always gets compliments when she brings them out.

12.  Is incredibly patient.  Will wait (and wait, and wait) for what she wants.  I guess that was a good trait, in that she waited for me! 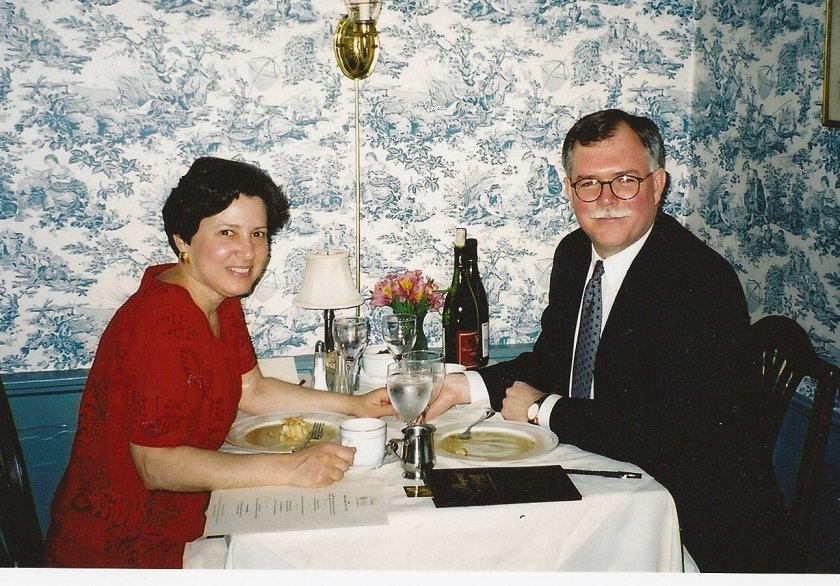 13.  Is non-judgemental.  She has said that when she sees a situation where she might get frustrated by someone’s action, she stops and thinks, “What don’t I understand about this situation?”

14.  Loved both my parents and always treated them with respect and affection.  Candice and my father had a special bond, driven, in part, by their shared love for theology.  When my father died, Candice asked me to get as many of his theological books as I could from his library.  Two or three boxes of books later, we had significantly added to our collection.

16.  Takes good care of me when I am sick – especially those times when I’m a terrible patient.  I certainly would not put up with what I put her through when I don’t feel well.  (Note:  The times I am really sick, I’m actually a pretty good patient.  But that’s not often.)

17.  Is a wonderful mother to our children. I give her (and the twins) all the credit for how well they turned out as people.  Plus, I think the twins have been helped by having a mother who is a teacher.  She knows things from her training where I am clueless.

Claire and Candice in San Gimignano

Andrew and Candice in Stockholm

18.  Loves to travel, and is a great traveling companion for all of us.

19.  Does everything in her power to get me to eat a healthy diet.  If you see me with an order of french fries, you can be assured that I made the choice (instead of being served them as part of one of her dinners.)

20.  As the years of our marriage have passed, Candice has become much more comfortable with each of us separately focusing on things we enjoy.  I might go to a ballgame with a friend, and she’s fine with that (and in fact, is supportive.)  We can now spend the day together at home, and go for hours between checking in.  Yet she’s also aware of when we might need to connect.

21.  Loves good food and encouraged us to sit down and eat a civilized dinner with well-cooked food, thoughtful conversation, and no television.  We’ve been doing that for thirty-five years, and I think all of us have benefited.  As the children became older, we added candles (and later wine) to the mix.  Andrew and Claire have always been able to carry on meaningful conversations with adults, and I credit their experience at the dining room table.  We’ve also had some amazing conversations with them in recent years around topics that I never thought I’d consider – much less discuss.  All because of the good food and drink, and the space and time to share.

22.  Laughs at (most of) my jokes, even when she’s heard them dozens of times before.

23.  Has never been afraid to try new things.  In the course of our marriage, Candice’s jobs out of the house have included preservationist, teacher, tutor, shop keeper, caterer, teacher (again), innkeeper, and teacher (yet again).  I may have missed one or two.  Her curiosity, openness to new experiences, and desire to make a difference in the lives of others has taken her down many rewarding paths – for her and for our family. 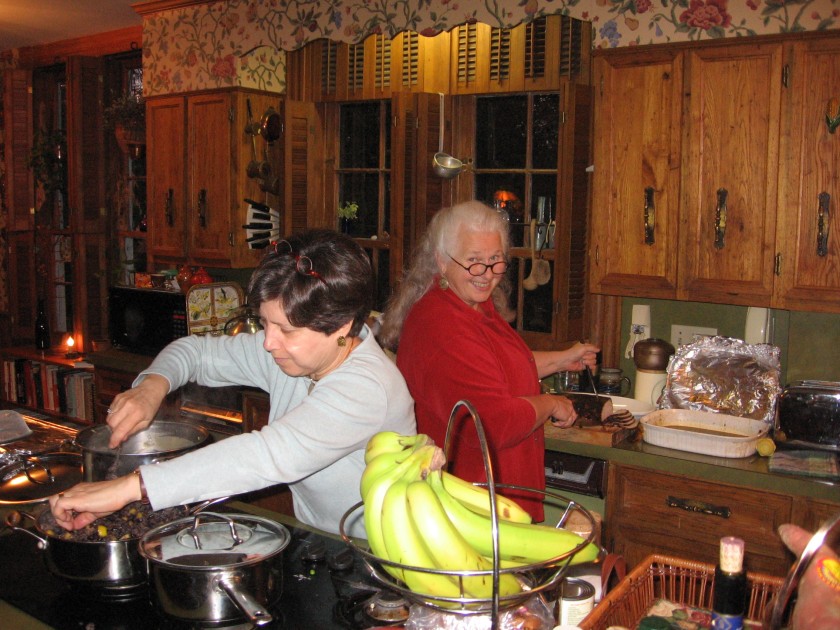 24.  Makes getting up early on Saturday to get to the Farmers’ Market fun, by tying it in with coffee and pastries at Tout de Sweet.  Saturday mornings are our time to connect with each other, catch up, and look ahead.  We both see it as our sacred time.

25.  Her idea of a perfect evening is to have an intimate dinner and conversation for several hours with a small group of friends.  As someone who doesn’t like large parties, I am forever grateful that this is her preference. 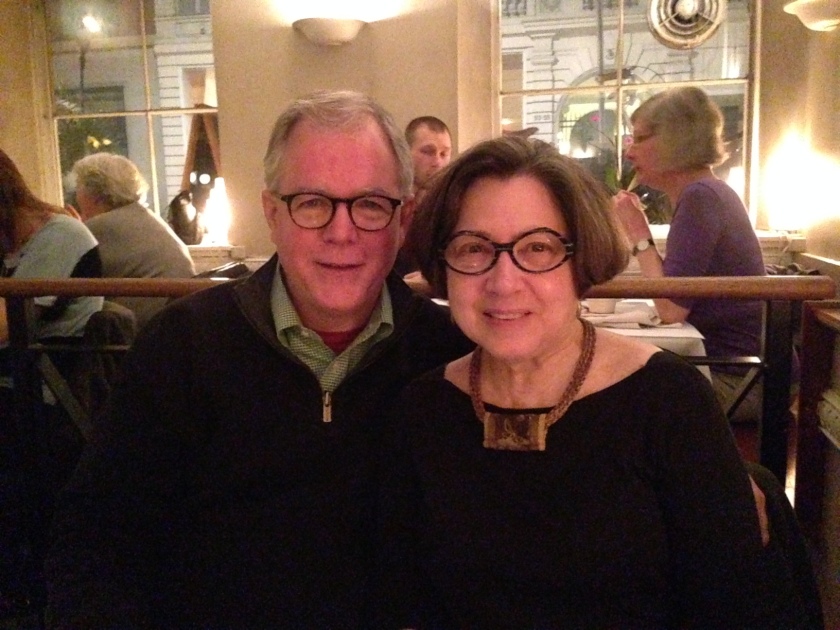 Our 32nd anniversary – celebrated in Copenhagen in March 2014

27.  Makes an effort to stay connected to family and friends.  She calls her family faithfully, and visits often.  When she hasn’t heard from someone in a while, she’ll often reach out with an email, Facebook post, text, or call to see how they are doing.  Once she “retired” she took to scheduling regular tea time or lunches with friends new and old.  My social life would be pretty limited without Candice’s instincts to connect with others.

28.  Loves traditions, and makes great ones for our family.  The twins – at age twenty-four – still look forward to getting their shoes filled with goodies on St. Nicholas Day.

29.  When cancer, a concussion, and hip replacement entered her life (at different times), Candice tackled each recovery with a dedication that I’ve seldom seen. She is a great example of how patient, doctor, spiritual director, family, and friends work together to bring healing to one’s body.

30.  Jazz is the only intersection between our musical tastes, but she has been to many more folk, bluegrass, and acoustic music concerts than I’ve been to concerts with acapella singing groups. She will put up with my music for a long time until she asks for a change (and Del McCoury is often involved in pushing her over the edge.)

31.  Candice grew up Catholic.  I was raised Southern Baptist, but by the time we met I had joined the Episcopal Church.  We agreed that we both wanted to worship in the same church, so we each took classes in the other church as we were preparing to get married.  (Note:  You can tell the difference in the two when you hear the names.  In the Episcopal Church, one attends the “Inquirers Class.”  For the Catholics, one goes to the “Converts Class.”)  I will always appreciate Candice’s willingness to move from her family’s church and towards the Episcopal church, where we’ve now been members for 35 years. 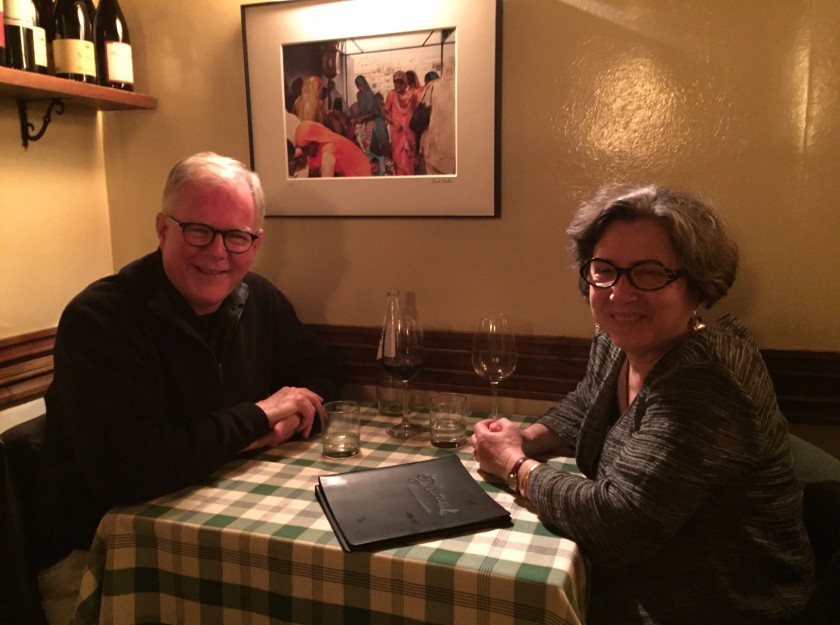 Celebrating our 34th wedding anniversary at Ditirambo in Rome

34.  For our 35th anniversary, was “all in” when I suggested a long weekend away at Mohonk Mountain House, for time to eat, read, meditate (yes, I went to a guided meditation class!), eat, get a massage, do yoga, eat, drink, and celebrate.  We had a delightful time re-connecting with each other and with this wonderful place. 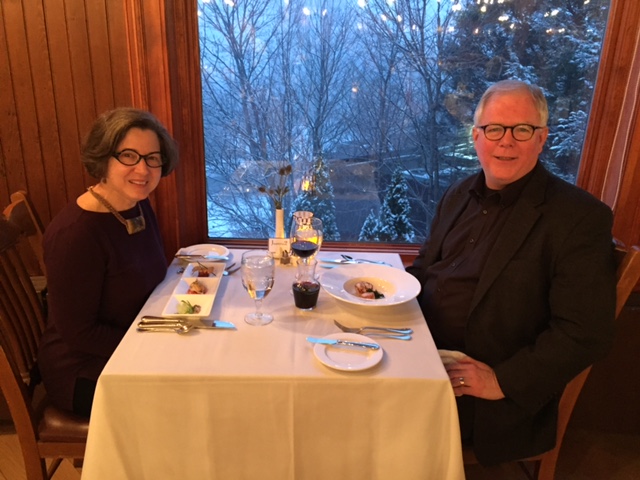 35.  Loves me unconditionally.  Who could ask for more?

Thank you, my love.  Let’s do thirty-five more!

Love, and with hopefully much more to come…

"You think your pain and your heartbreak are unprecedented in the history of the world, but then you read. It was books that taught me that the things that tormented me most were the very things that connected me with all the people who were alive, or who had ever been alive."