Several years ago I stopped making New Years’ resolutions.  A recent New York Times article on making and keeping resolutions noted that one-third of our resolutions don’t make it to the end of January, while another Times article suggested that only 10% of resolutions are fully met by year’s end.  I’m proud to say I’ve kept my particular resolution since 2014!

What I did in 2014 was to set seven rules for how I wanted to live for the next third of my life, and I recently added an eighth.  Because they are part of my computer wallpaper, I look at them every day.  The one that generates the most comment is the last one, which is basically “Don’t be a grumpy old man.”  That may be a hard one for setting metrics (laughs per day?) but I basically know when I’m following this rule or when my crotchety index is on the rise. 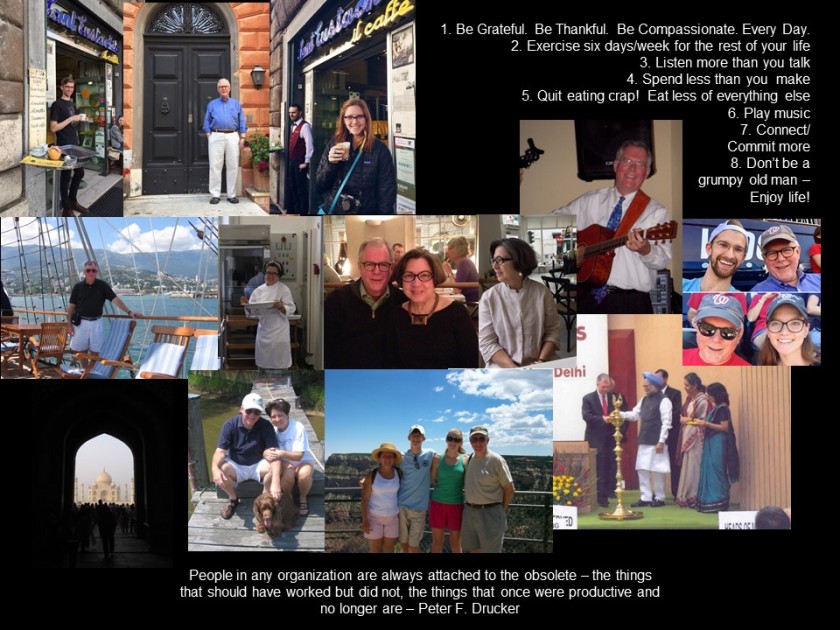 My computer wallpaper with David’s Rules

Many of us make resolutions or set rules for our lives, counting on our willpower to reinforce good habits or to change bad habits we’ve allowed to fester over time.  I’ve written before about how habits are not destiny, and suggested the work of Charles Duhigg if you are interested in changing them.  However, an excellent New York Times op-ed reminds us that willpower isn’t the only path to success.  In fact, author David DeSento suggests that willpower is the wrong way to keep resolutions.  He asks why, after decades of a self-help industry that promotes willpower, little has changed in many of our lives.

“The answer, I contend, is that this view of self-control is wrong. In choosing to rely on rational analysis and willpower to stick to our goals, we’re disadvantaging ourselves. We’re using tools that aren’t only weak; they’re also potentially harmful. If using willpower to keep your nose to the grindstone feels like a struggle, that’s because it is. Your mind is fighting against itself. It’s trying to convince, cajole and, if that fails, suppress a desire for immediate pleasure. Given self-control’s importance for success, it seems as if evolution should have provided us with a tool for it that was less excruciating to use.

I believe it did; we’re just ignoring it. That tool is our social emotions. These are the emotions — things like gratitude and compassion — that support the positive aspects of social life. For years I’ve been studying the effects of these emotions on decision-making and behavior, and I’ve found that unlike reason and willpower, they naturally incline us to be patient and persevere. When you are experiencing these emotions, self-control is no longer a battle, for they work not by squashing our desires for pleasure in the moment but by increasing how much we value the future.”

DeSento, a professor of psychology at Northeastern University, wraps up his article by noting,

“Cultivating the social emotions maximizes both our “résumé virtues” (those that underlie professional success) and our “eulogy virtues” (those for which we want to be remembered). In nudging the mind to be more patient and more selfless, they benefit everyone whom our decisions impact, including our own future selves. In short, they give us not only grit but also grace.”

My journals, where I track progress against my life rules

Happy New Year with special wishes for progress against whatever resolutions or life rules you have set for yourself.