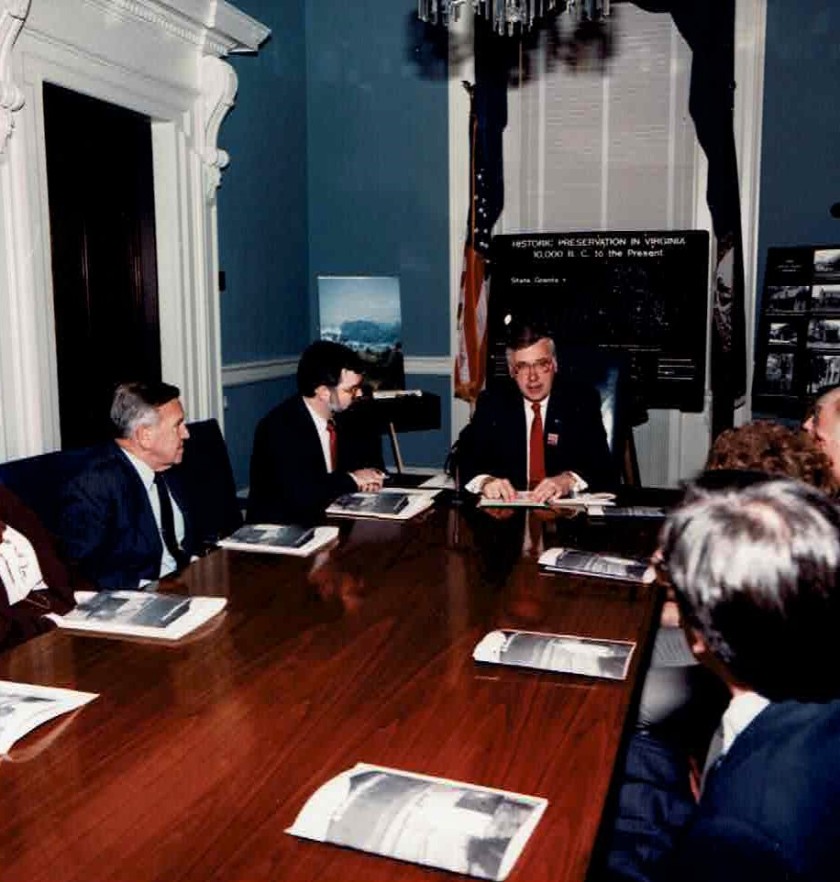 (Note: Slightly revised versions of this appreciation ran in the National Trust’s Forum newsletter, on LinkedIn, and on social media pages for Preservation Virginia and other preservation organization.)

Former Virginia Governor Gerald L. Baliles, who passed away on October 29th at age 79, has been appropriately recognized as a quiet but effective leader. His “boldly cautious” style was credited for gains in increasing the number of women and minorities in statewide leadership positions, as well as for increased support for transportation and the environment.

But the Jerry Baliles I remember was also one of the most effective advocates for historic preservation at a time when development pressures in Virginia were pushing forward at the expense of its past. His leadership led to much needed changes at the state level that played an important role in all that has happened to save the best of Virginia’s past in the almost three decades since the end of his term as governor in 1990.

During his campaign for governor, Jerry met with representatives of the state’s preservation community. He listened intently to the challenges we put before him and promised, if elected, to be a friend of historic preservation.

He was true to his word, and soon he could be found at historic sites, Main Streets, and in older neighborhoods around the Commonwealth, promoting the benefits of preservation. Jerry had a special place in his heart for Thomas Jefferson’s Bedford, Virginia, retreat—Poplar Forest—which had just been purchased by a group of citizens who fought to save it from inappropriate use and encroaching development. Jerry helped promote the rescue and restoration effort, serving as Chairman of the Governor’s Campaign to help fund the restoration. Because of his personal interest, he became the first governor since Thomas Jefferson to sleep overnight in the retreat, which was still in its pre-restoration condition.

While Virginia had world-class historic resources, its public sector program had not received the financial and political support required of a state with such a rich legacy. A  broad cross-section of preservation, conservation, and Main Street organizations put forth a proposal for a gubernatorial commission to recommend a path forward. Jerry liked the idea, and on April 10, 1987, he created the Governor’s Commission to Study Historic Preservation. It was a highlight of my professional career when Jerry asked me to chair this blue-ribbon panel.

The 23 men and women who made up the commission came from diverse backgrounds, including preservation, law, business, development, housing, government, and education. Over the course of 18 months, the commission held hearings across the state to listen to citizens about the importance of preserving the past, worked with experts from across the country, and prepared a comprehensive report submitted to the governor on November 3, 1988.

The report included 32 specific recommendations which ranged from calls to increase the clout and visibility of the state program and better review of state actions that affected historic resources, to suggestions for strengthening local government programs and providing financial support and incentives for preservation.

It is a testament to Jerry’s skill that the majority of the recommendations were included in a successful bill put before the General Assembly by Delegate Whittington W. Clement in 1989. Chief among the law’s provisions was the establishment of the Virginia Department of Historic Resources and the establishment of a statewide preservation revolving fund, the latter operated since 1999 by Preservation Virginia. Those changes established a new level of support for preservation in state government and helped a statewide coalition of more than 160 organizations learn how to advocate effectively on preservation issues with the administration and state legislature. Both were critical in ensuring passage in the following decade of the state’s transformational historic rehabilitation tax credits. Virginia’s Historic Rehabilitation Tax Credit program has played an essential role in the preservation of thousands of historic properties since its inception, stimulating $4.5 billion in private investment since 1997.

Jerry’s work in historic preservation didn’t end with the Governor’s Commission, as his administration also led the effort to restore the historic Executive Mansion on Capitol Square in Richmond. Designed by Alexander Parris in 1813, it is the oldest occupied governor’s mansion in the United States. And while he was known as the “transportation” governor, he understood that building and improving infrastructure depended upon sound cultural and natural resource data. He took personal interest as governor in ensuring that state projects would not adversely affect Virginia’s landscape.

Jerry spoke to the importance of preservation, when he addressed the commission in July of 1987.

“With so much history within our Commonwealth, we have an especially pressing responsibility to keep our rapid growth balanced with a respect for the past…But preservation is not reverence. Preservation is, rather, a tool to manage change.”

After he left the governor’s office and I moved to the Washington area, Jerry and I would connect every couple of years. The last time was in early August, at the funeral of our mutual friend Anne Worrell. Jerry spoke at that funeral, and I had the chance to catch up with him and wish him well. He spoke eloquently of Anne’s work in preservation, but was obviously frail from the cancer that would take his life less than three months later.

Jerry Baliles was an important public sector advocate for historic preservation at a critical point in the history of the movement. All who care about the future of our past — and not just Virginians — owe him a debt of gratitude.