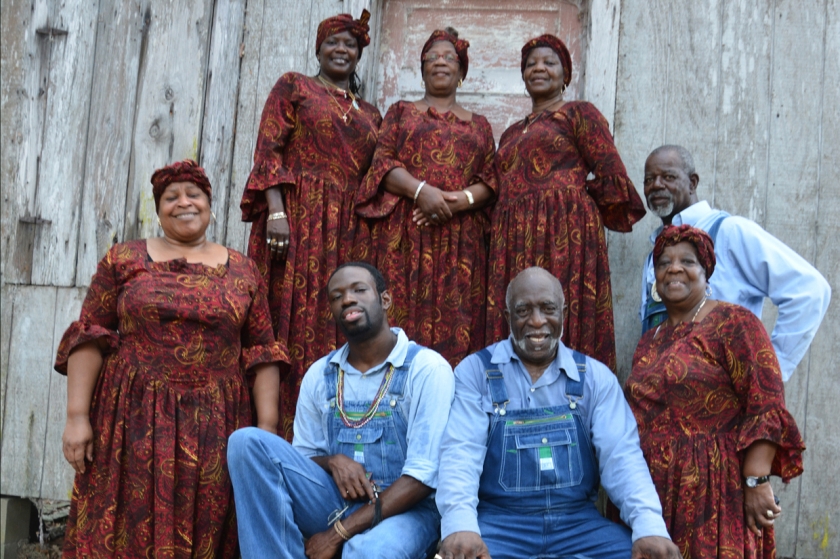 One of the last upholders of the African American ring shout, the McIntosh County Shouters “keep the faith, form, and fervor of the generations-old tradition rooted in their small community of coastal Georgia.” In this week’s Saturday Soundtrack, we’ll examine the work and music of this acclaimed group.

Named a National Endowment for the Arts Heritage Fellow in 1993,

“The McIntosh County Shouters are the principal, and one of the last, active practitioners of one of the most venerable African American song and movement traditions — the “shout,” also known as the “ring shout.” The ring shout, associated with burial rituals in West Africa, persisted among African slaves and was perpetuated after emancipation in African American communities, where the fundamental counterclockwise movement used in religious ceremonies integrated Christian themes, expressed often in the form of spirituals. First written about by outside observers in 1845, and described during and after the Civil War, the shout was concentrated in coastal areas of South Carolina and Georgia.

These shouting songs “have resisted slavery, strengthened spirit, and left us a cultural keystone for the future,” notes the group on their website.

I first heard the Shouters on the eTown show, so we’ll begin with the moving Blow, Gabriel, one of the tunes from that live performance.

James Calemine, in a loving and insightful piece on the Shouters in The Bitter Southerner, says the group’s ancestors “were literally the original American songwriters, rappers and folk artists.”

“The 20th century’s greatest collector of American folk-music recordings, Alan Lomax, once said, ‘The Georgia Sea Islands are the home of the American song’.

Lomax first recorded the Georgia Sea Island Singers in 1935 with writer Zora Neale Hurston. Lomax returned to the Georgia sea islands to record the group again in 1959. But the Sea Island Singers dissolved around 2006, leaving the McIntosh County Shouters as the last of their kind. It was the legendary founder of Folkways Records, Moses Asch, who first recorded the Shouters in 1983. The resulting album — still in print — was called “Slave Shout Songs From the Georgia Coast.” The Shouters practice the “ring shout” — a hypnotic counterclockwise shuffle accompanied by call and response singing, the percussion coming only from clapping hands and sticks beating drum-like rhythm on a wooden floor. But notably, during their performances, the McIntosh County Shouters do not cross their feet. Why? That would be considered dancing.“

Move Daniel shows this call and response song pattern, along with the percussion sounds of feet and sticks as the women in the group move in this shuffle pattern.

In 2017, Smithsonian Folkways recorded Spirituals and Shout Songs from the Georgia Coast in association with the National Museum of African American History and Culture, where the Shouters sang at the museum’s opening. I Wade the Water to My Knees is from that album.

Next is a beautiful trailer put together for the record by Smithsonian Folkways explaining more of the background for the shout. It includes interviews with several of the group members. Shouts often took place around holidays. One of the major times for shouting, as we hear in the video, was after midnight every year on “Watch Night,” which commemorates gatherings of African-Americans on New Year’s Eve in 1862, who came together to await President Abraham Lincoln’s January 1, 1863, signing of the Emancipation Proclamation.

Adam in the Garden is a short clip that shows the shuffle of the ring shout. and Religion, So Sweet is another of the performances from the eTown show.

Of course, ring shouts grew from burial rituals, so topics of death and judgement are prevalent, such as in The Sign of the Judgement.

It May Be the Last Time is another shout song about moving through death. You hear it in the short video documentary above and also in the Folkways album. The eTown folks incorporated it very nicely in a medley to wrap up their show. The Shouters join the finale and bring down the house at about the 3:30 mark of the video.

It may be the last time we sing at all “

As we move into a festive time of year, many will feel the pain of the loss of those they love at a deeper level. The traditions and music of the Shouters can remind us that those who have gone before us felt the same pain, and have done so for centuries often under very difficult conditions.

The McIntosh County Shouters are not currently performing, due to the pandemic. But in the typical caring fashion that grows out of their community, faith, and tradition, the website notes that they continue to “pray for those who are sick and the families who are caring for them.”

We could all do the same, out of our own beliefs and traditions, as we continue to battle a deadly, worldwide virus.