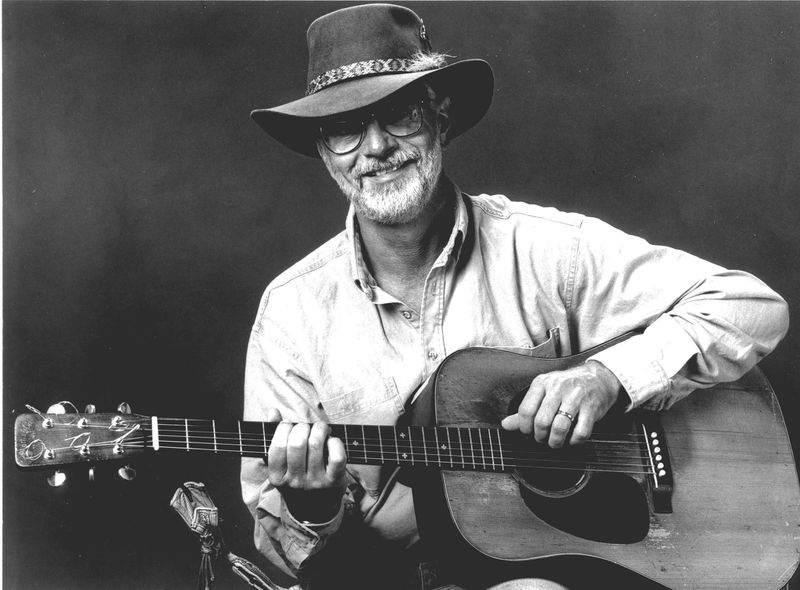 Bill Staines, one of the most beloved folksingers of his generation, passed away on December 5th after a battle with cancer. While it has been a number of years, I was fortunate to see Staines perform live several times, most recently at the Oak Grove Folk Music Festival outside Staunton, Virginia. The small, compact setting in the midst of a group of trees, was perfect for the man described as “the master of intimate concerts.”

Nanci Griffith, who also passed earlier this year, described Staines as the “Woody Guthrie of my generation” and the man who inspired her to begin writing and performing her own work. She recorded Bill’s beautiful tune Roseville Fair on her live album in 1988.

Staines was left-handed and played a right-handed guitar upside-down, with the bass strings on the bottom. Consequently, he developed his own unique fingerings and picking style.

He recorded more than 20 albums, his first being in 1966 and the last in 2012. Besides Griffith, a variety of artists covered his songs, including (according to Wikipedia) Peter, Paul and Mary; Makem and Clancy; Mason Williams; The Highwaymen; Glenn Yarbrough; Skip Jones; Jerry Jeff Walker; Schooner Fare; Grandpa Jones; The Grace Family; Hank Cramer; Coty Hogue; Wendy M. Grossman; and Priscilla Herdman.

I have three personal favorites from his catalog, and I’ll include them all here. The first is Roseville Fair, heard in a 2010 house concert. As you can see, his audiences always knew the words and sang along.

A Place in the Choir — heard here from the album version — was another crowd favorite.

Finally, the shows I saw by Staines generally ended with the beautiful tune River. I can’t think of a better version than this one with the Mystic Chorale.

River, take me along in your sunshine, sing me a song
Ever moving and winding and free
You rolling old river, you changing old river
Let’s you and me, river, run down to the sea

Roll on, river, down to the sea. Rest in peace, Bill Staines.