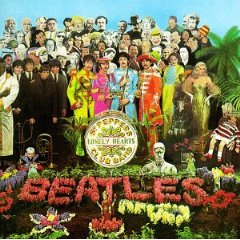 There’s not a lot you can add to all the words that have been written about Sgt. Pepper’s Lonely Hearts Club Band.  The Wikipedia entry for the album is one of those that drives people who hate crowd sourcing to rants, because it probably runs longer than the Wikipedia entry for World War II . (I haven’t actually checked that out, but it makes a good line so I’m sticking to it.)  If you want to read about the echo effects, the engineering, the late night recording sessions, even how that great, thunderous E chord at the end of A Day in the Life was produced – you’ll find it all there on Wikipedia.  And that’s just one of countless articles and books written about the Beatles and this music.

Sgt. Pepper’s Lonely Hearts Club Band has been a source of endless fascination since it was released, and I was certainly smitten as a young teenager.  This is probably on my list as much for what it represents about my youth as for the album itself.  The Beatles were constants in our house growing up, because my brother and I listened to them all the time.  My first record purchase was the 45 I Want to Hold Your Hand and Steve and I collected countless Beatles albums and 45s through the years.  In some ways, I like the last half of the second side of Abbey Road better (beginning with You Never Give Me Your Money), but for an entire album’s worth of music, it is hard to argue with what Rolling Stone listed as the greatest album of all time in 2003.

At this point you have a right to ask, “David, have you listened to any music that was made after 1976?”  And the answer would be yes, but like those editors of Rolling Stone my favorites tend to come from my formative years.  And for my generation, the Beatles influence was pervasive.  Sam Bush, the great mandolinist and band leader, has cited the Beatles as an influence in his branching out away from bluegrass into newgrass and beyond.  From the other side of my musical heritage, I sang with an eight-person vocal group called Canticum Novum for about ten years in the Shenandoah Valley, where we did everything from Jan Sweelinck to  Benjamin Britten.  So imagine my surprise when our director – a wonderful woman named Carol Taylor who is married to George Taylor of the world-renown Taylor & Boody Organbuilders – mentioned one night that she loved to listen to the Beatles sing.

Anyway, enough of this rambling.  I always enjoy listening to this album and it is one of the few that I won’t put on “shuffle” mode on iPod.

As for the video, the Beatles, of course, didn’t make any videos around Sgt. Peppers.  So you’ll have to make do with this version of Paul McCartney and U2 singing the title song live.  (This, incidentally, is how my kids came to know the song and the album.)   Bono is not quite John Lennon, but enjoy this version anyway.