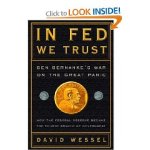 Last August I wrote a blog on summer reading lists, where I opined that summers are for checking out lighter topics than war, death and other such critical issues.

But this summer I’ve back-tracked a bit on that perspective.  Perhaps it is the reality of the economy.  Perhaps it was the good reviews.  But in any case, I began my time off this summer with In Fed We Trust:  Ben Bernanke’s War on the Great Panic.

David Wessel’s insightful look at how the Federal Reserve responded to the recession and Great Panic of 2007-2009 is informative, sobering – and a very good read.  Wessel is the economics editor for the The Wall Street Journal and writes with clarity and urgency.  It is all here – the rescue of Bear Stearns, the collapse of Lehman Brothers, and the government moves to take over AIG and Fannie Mae.  And the story is as fresh as today’s headlines.  For those of us who are not economics majors, this is a great introduction to understanding one part of the government response to what the International Monetary Fund declared to be “by far the deepest global recession since the Great Depression.”

When you read In Fed We Trust and see how close we came to the collapse of the financial system, today’s news about the childishness of the public discussion over issues such as the impact of the stimulus bill or health care reform makes you fear for your country.

In addition to having this “automatic” stabilizing effect, the government has stepped in to rescue the financial sector. You can argue (and I would) that the bailouts of financial firms could and should have been handled better, that taxpayers have paid too much and received too little. Yet it’s possible to be dissatisfied, even angry, about the way the financial bailouts have worked while acknowledging that without these bailouts things would have been much worse.

The point is that this time, unlike in the 1930s, the government didn’t take a hands-off attitude while much of the banking system collapsed. And that’s another reason we’re not living through Great Depression II.

Last and probably least, but by no means trivial, have been the deliberate efforts of the government to pump up the economy. From the beginning, I argued that the American Recovery and Reinvestment Act, a k a the Obama stimulus plan, was too small. Nonetheless, reasonable estimates suggest that around a million more Americans are working now than would have been employed without that plan — a number that will grow over time — and that the stimulus has played a significant role in pulling the economy out of its free fall.

All in all, then, the government has played a crucial stabilizing role in this economic crisis. Ronald Reagan was wrong: sometimes the private sector is the problem, and government is the solution.

Wessel doesn’t smooth over serious concerns about the actions of Bernanke, former Treasury Secretary Hank Paulson, and then New York Fed President Tim Geithner.  But he does help the reader see the fundamental issues.  Where would we be as a country if the Chairman of the Federal Reserve hadn’t been a lifelong student of the causes and responses to the Great Depression, and then had the understanding and conviction to act?  As Wessel repeats throughout the book, the Fed was willing to do whatever it takes to avoid collapse.  In response to this courage – by two Republicans and a Democrat in three key positions in government – we have politicians who dismiss facts and rewrite history on the fly.  Health care reform and the continuing response to the recession both are being treated as political footballs and ways to score points.  These are serious times.  Where are the grown ups?

For those interested in more than a superficial understanding of what we faced as a country during the Great Panic and why rescuing the financial system, In Fed We Trust is a good place to start.

And to prove that I take last year’s blog seriously, I’ll turn to less serious reading for the next few books in my pile.  So look soon for my take on Satchel:  The Life and Times of an American Legend.