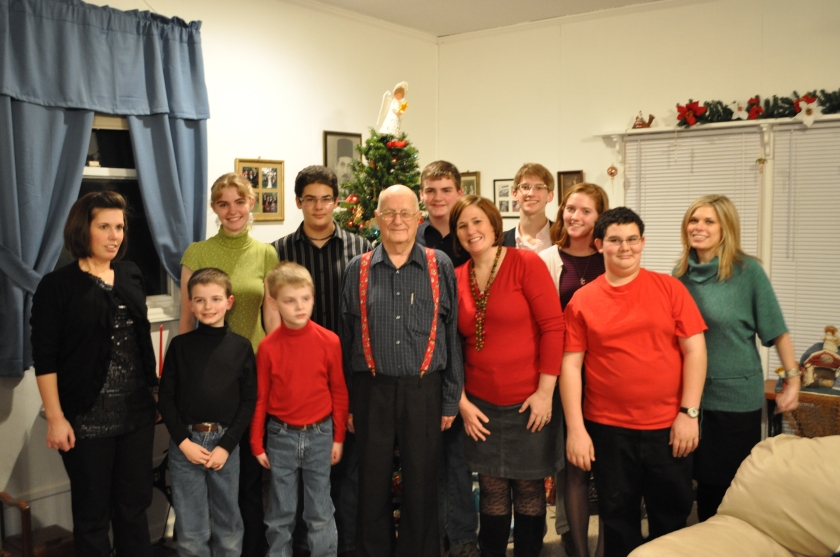 We left the blizzard of 2009 behind us and headed out to Tennessee to visit with family and friends for the Christmas season.  It has been rejuvenating and restful to be with those folks you don’t choose, but with whom you share so much.

Having Andrew and Claire reconnect with all their cousins and their cousins’ children. The latter group includes two babies born about four months ago (Leighton) and just 10 days ago (Oliver).  Little babies are such great additions to Christmas.

Visiting with my sister and her family who have returned to the states after 17+ years overseas. Their older son David is maturing into a wonderful young man while their younger son Nathan is full of life and mischief.  My brother-in-law is a real artist in the wood shop, having built most of the beautiful furniture in their house by himself.  And it was great to hear my sister Carol play and discuss the Oud – a Middle Eastern lute.  After a short attempt at picking my limited repertoire of Middle Eastern melodies, I decided that the bowl backed Oud and my slightly bowl-shaped waistline were mismatched!

Talking with my father about two books of evocative historical photographs from the Tennessee Valley Authority, where dad worked for more than 30 years. When you see the photos of the serious erosion of the farm land and the extreme poverty of the Tennessee Valley of the 1930s – and hear my father talk about seeing it first hand with his father and uncles – you are reminded how government programs cannot be explained in the simple black and white terms of the current crop of political pundits.

Having an old-fashioned guitar pull with my brother Joe and the next generation of family pickers – Joe’s son Joseph and Carol’s son David. I’ve been playing music at family gatherings since my brother Steve and I use to play with my cousin Johnny (aka Hershey) at Mamaw’s house in the 1960s.  It is great to see the tradition continue.

Having a cup of boiled custard, thanks to Joe. When I think of Christmas, I think of my mom’s boiled custard (with SEVEN cups of sugar in a one-gallon recipe) and chocolate covered peanut butter balls.  Candice knows how much I love these treats, but she also knows that my arteries need to remain open for the old ticker to work, so I don’t get them often.

Being with my sister Debbie, who is – as I told her tonight – the new Mom in our family. My mother died 12 years ago this New Year’s Day, and Debbie does so many things just like my mom that I can shut my eyes and go back in time.  Watching her three girls and their five children (all under the age of six) open Christmas presents while Debbie and her wonderful husband Mark kept their cool so reminded me of Christmas mornings years ago with Mom and Dad.

Eating, eating, and then eating some more. On Christmas Eve we had a fabulous noonday spread at Joe and Kerry’s artistic and comfortable hand-built farmhouse (pictured in the guitar pull picture) featuring roasted turkey (from an outdoor grill – thank you Jason), ham, corn pudding, Waldorf and green salads…and on and on.  By Christmas Eve night we were back at it, eating the traditional Brown family “breakfast” of pancakes, eggs, bacon, some more ham, great apple and pear turnovers and fruit before all the kids were snug in their beds.  Christmas Day we still had room for some wonderful soup from Carol, a great cheese tray that Candice put together, some veggies and other finger foods that we grazed on throughout the day.

Watching the 6th Harry Potter movie on Christmas Day with four Potter experts. Because Andrew and Claire had reached the age of not wanting to go to the movies with their parents when Harry Potter and the Half Blood Prince arrived in theatres, this was the one movie in the series I hadn’t seen.  Watching it today (a gift from Andrew to Claire) with my two kids and David and Nathan, all I had to do was start a question (such as “Why does Snape have to be the one to kill Dumbledore?”) and I got four in-depth answers.

Laughing my head off with Carol and Debbie as we sang songs from a 50-year-old family songbook. I think the in-laws, spouses, children, nieces and nephews thought they were all part of the strangest family ever, but looking at that old book, seeing the tunes and photos that I use to study as a child and being reminded of singing around the piano with mother touched a deep and loving part of our hearts.

Having a quiet Christmas morning to open presents with Candice, Andrew, Claire and my dad. Gifts were chosen that were both thoughtful and loving.

Christmas in our family has had its share of sorrows.  Candice’s father died on December 26th just last year, and my mother barely made it through the holiday before dying of cancer on January 1, 1998.  But most of my memories are of great times.  This year reminded me of the family traditions we’ve blended together, of the new generations that enrich our time together and of the love that people thrown together as family can share for each other even when they are as different as we’ve always been.

Image: Tom Brown with 11 of his 13 grandchildren