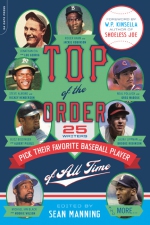 I picked up Top of the Order:  25 Writers Pick Their Favorite Baseball Player during the Politics & Prose sale a couple of weeks ago.  Only a handful of the writers were familiar and the inclusion of Michael Jordan (yes, that MJ) and the fictional Crash Davis in the list of favorites indicated this anthology was going to take a different tack from the typical list of baseball’s greatest hits.

Top of the Order is, at best, uneven.  I couldn’t wait to get through some of the self-indulgent essays (see Pat Jordan on Tom Seaver) which were more about the author than I cared to read.  At their best, some of the essays captured the special nature of fandom (see the obsessive Darin Strauss on Mariano Rivera) where you didn’t mind the intrusion of the writer.  Steve Almond leads off with a strong piece on Rickey Henderson that hooks the reader into this quirky collection.  Neal Pollack writes a terrific essay on Greg Maddux that demonstrates how dominant Mad Dog was through so many years in the 1990s.

But then Sean Manning’s piece on Michael Jordan and John Albert’s essay on Jeff Kent’s mustache almost made me want to put the book down.  So readers beware…you will probably find Top of the Order satisfying and frustrating at the same time.

One aspect of the book I found very appealing:  more than a handful of the essays were written by women.  And the best essay – not just by a woman but in the entire anthology – was by Carrie Rickey, film critic of the Philadelphia Inquirer, on Kevin Costner’s Crash Davis from the best baseball film ever – Bull Durham. First of all, she has the good sense to admit that she watches Bull Durham often.  So do I.  Rickey writes,

In just a few short pages, Rickey touches on many of the key scenes from the movie.  She opens with her own take of Crash’s “I believe…” soliloquy (including a terrific “I believe that the dramas of Kevin Costner are self-indulgent dreck”), recounts the evergreen of Crash teaching rookie Nuke LaLoosh his baseball clichés (“they are your friends”),  and notes that when we first meet Crash he shows the switch-hitter’s ability to digest, process, and adjust (going from denial, to anger, to acceptance in three sentences that end with “Who we play tomorrow?”)

Rickey’s essay reminds me that some of my favorite writing about baseball has been by women.  In the 2008 anthology Anatomy of Baseball, Elizabeth Bobrick’s “Oriole Magic” is worth the price of the book.  (Click on the link to read some excerpts.)

So on this Father’s Day, when so many baseball fans wax eloquently about how their fathers introduced them to the game, remember that a great many women (including my late mom) understand the game at a level many men miss.  As Rickey writes about Annie Savoy in Bull Durham,

Here is a woman who knows as much about the game as Crash.  Here is a woman for whom baseball is a religion, who sees the ballplayer who loves the game more than it does in return, and who loves him in a way that finally puts Crash’s life into balance.  And he’s evolved enough not to be intimidated by her.

Catch a game of baseball this week…and perhaps if you’re a guy, take a woman with you to help explain what’s going on with the action on the field.