Well, we’re in the highly anticipated and/or dreaded final week.  (Pick your own point of view.)  It is countdown time.

Our twins, Andrew and Claire, will graduate from high school this weekend.  Since they attend different schools, Andrew goes first on Saturday then Claire follows on Monday.  I’m not sure I’m ready for this, but I don’t think either child plans to slow down and wait for me to catch up.

Truth be told, I’ve been having a great deal of fun over the past few weeks…so I expect it to only get better over the next 7 days.

Sunday was Andrew’s Senior Voice Recital.  We had about 75 friends and family there, and he did a great job.  Andrew’s piano teacher from 5th through 11th grade, Rosanne Conway, was the accomplished and sensitive accompanist, while his long-time friend and fellow chorister Sarah joined him for a beautiful encore.

For the benefit of the music lovers among the readership, here’s the song list: 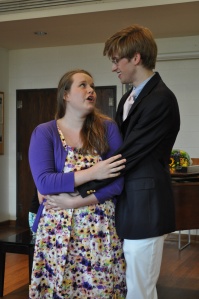 This was the fifth of six recitals or concerts we’ve attended in the past few weeks, and I’m amazed at the talent of these young adults.  We heard a jazz set the other night at Claire’s school that you could expect to hear from much more seasoned musicians.  Two concerts at the Kennedy Center with Andrew and other students from the area have been first rate.  And last evening was Sarah’s recital, which was as superb as the setting in the Washington National Cathedral.

But our time isn’t all taken up with the performing arts.  We had the chance to see three of Claire’s photographs in the school art show, and she’ll have five photographs in this week’s Senior Art Show.  I especially like the snow scene, which was wonderful when printed out in large format.  And as I was posting this, we just learned that she was awarded Best Photograph in the Senior Art Show for the second shot below!  She has a great eye and we’re obviously proud of her.

So this week we have a recital, two proms, a class dinner, an art show, a class breakfast…and that only gets us to Friday morning. Expect to see a few more photos.

Just so you know, I’m planning on savoring every moment.  When you have twins, you only do this one time.