U.S. Cellular Field rises like an impenetrable fortress alongside the Dan Ryan expressway in South Side Chicago as fans walk over from the L train station.  After spending time at neighborhood friendly PNC Park, Coors Field, Wrigley Field, the new Busch Stadium, and AT&T Park in the past couple of years, I was reminded last evening that not all stadium architects and planners were thinking “retro is good” in the early 1990s – that is, unless you think the era we should pine for requires our designers to emulate the outside of Tropicana Field.

To be fair, U.S. Cellular Field (then known as the “new” Comiskey Park) opened in 1991 a year before Baltimore opened the beautiful Camden Yards in 1992 and turned stadium design both backwards and forward at the same time.  But they still play baseball in both of them, and I’ve even seen a good game in Oakland.  So enough, already.  Play ball!

Last evening I crossed the halfway point in my quest to visit all 30 major league baseball stadiums with a visit to U.S. Cellular Field to see the home-standing Chicago White Sox take on the division leading Detroit Tigers.  And, as the title and lead picture suggest, it was Chicago Blackhawks Night at the ballpark.  The Stanley Cup champions brought some hockey sensibilities to a crowd that I suspect doesn’t need much encouragement in that area.  This is a heavy metal type of stadium and fan base.

But the entire price of admission was worth it to hear Jim Cornelison – the singer for the Chicago Blackhawks – perform the National Anthem while the entire stadium stomped and cheered throughout the song.  Unbelievable!

(And if you don’t believe me, check out his performance last year from a Blackhawks/Red Wings game in the video below.  If we’re going to have an unsingable national anthem, then this is how it should be sung…by professionals!)

The game itself was about what you would expect from a division-leading team with a hobbled but still potent potential back-to-back Triple Crown winner, and the last team in the division, now 24.5 games back and playing out the string.  Final score:  9-1 Tigers. That MVP candidate, Miguel Cabrera, didn’t do a lot last evening, going 0-5 and only once taking a shot that was caught up against the wall in right field.  But his running mate Prince Fielder was hitting rockets all night, going 4-5 including a bullet that screamed out of the park in a heartbeat in the third.  He may be rotund (they play behind him at first, which generates a lot of “run Prince run” catcalls), but Fielder has some pop in that bat.

Unfortunately the White Sox played a bit like the Keystone Cops.  I was sitting on the first base side and had perfect views of 3 of the 4 errors – two on easy throws that got away from third baseman Conor Gillaspie (he made another fielding error late in the game to hit the trifecta), and one on a muffed catch by Paul Konerko when Gillaspie made a good throw.  (Perhaps he was surprised.)  Adam Dunn’s night reminded me of why I was glad when the Nationals didn’t resign him a couple of years ago.

But that’s baseball.  Sometimes you win.  Sometimes you lose.  Sometimes it rains.  With a steamy 90 degree temperature at the start of the game, some of the crowd of a little more than 19,000 might have appreciated some rain.  And as is typical in these cities that are so close and where the rivalries go back decades, there were many Detroit fans among those 19,000 last evening.

It was a fun night.  Anytime you get to ride the L in Chicago (Purple Line from Evanston down to the Red Line, which has been rerouted a bit while they do repairs…are all Red Lines in need of repairs?) with the great people of that wonderful city, then take in a night at the ballpark, it is time well spent.

Thanks Chicago…and don’t forget to stand for the National Anthem! 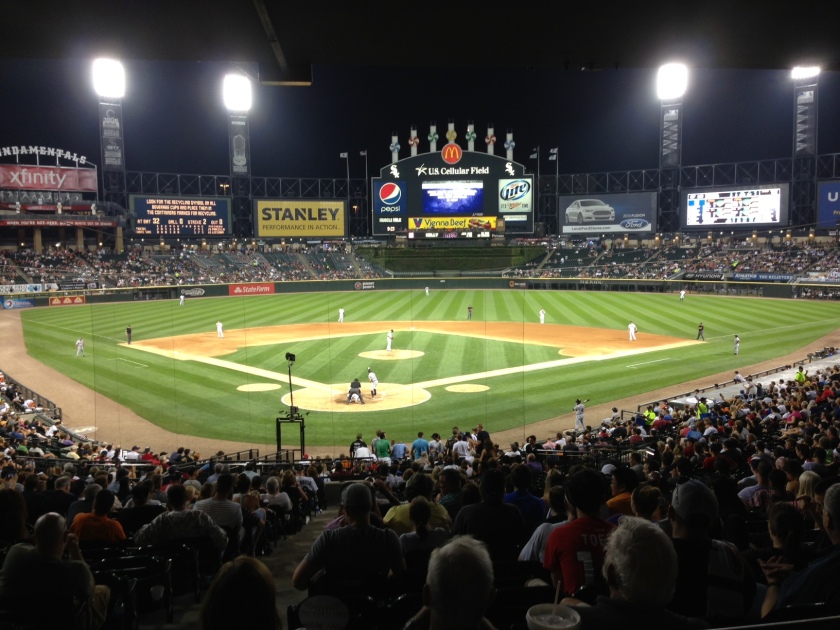 "While living the life of a wave, the wave also lives the life of water. It would be sad if the wave did not know that it is water."