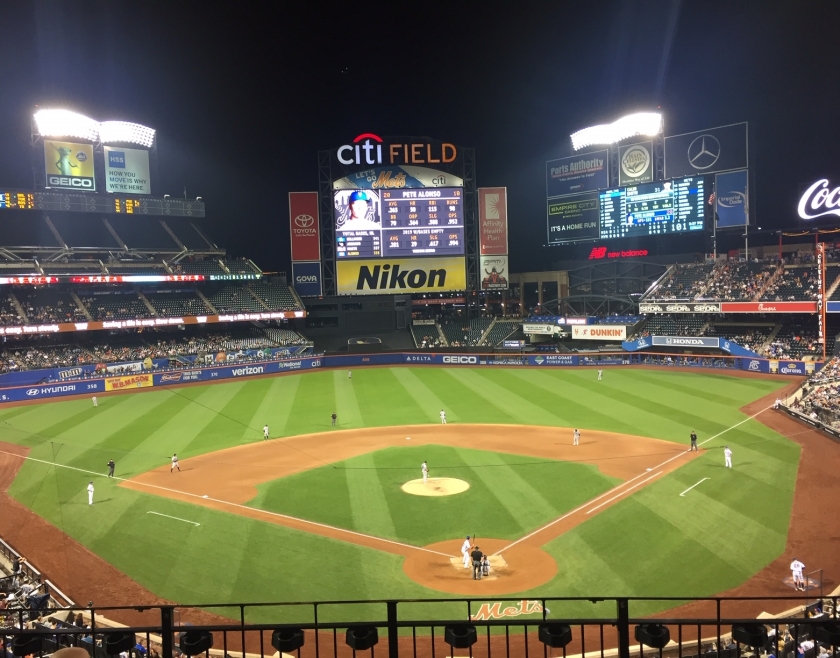 The latest stop on my quest to visit all 30 Major League ballparks* found me, earlier this week, with a friend at the front gate of Citi Field, home of the New York Mets. It had taken almost an hour by train during the height of the evening commute to get from midtown Manhattan to Flushing. After stepping off the subway, I was disappointed to find the ballpark — home to one of two major league baseball teams in the nation’s largest city — in what was essentially a suburban setting, surrounded by parking lots. The game had just begun so we stopped only briefly to take in the entry rotunda, yet even that short pause made me think of the gateway to Ebbets Field, the famous home of the Brooklyn Dodgers.

It was only later that I discovered that the ballpark was in its unfortunate location thanks to that old enemy of urbanism, Robert Moses. And yes, the owners of the Mets had appropriated the Brooklyn Dodgers and the “New York City history of the National League as abandoned property” in creating the entrance to Citi Field.

Those insights, and hundreds more, are found throughout Paul Goldberger’s magnificent new book Ballpark: Baseball in the American City. Goldberger — Pulitzer Prize-winning architectural critic, Trustee emeritus of the National Trust for Historic Preservation, and a personal friend — has written an elegant and engaging work on a subject that’s clearly as dear to his heart as it is to mine.

In slightly more than 300 pages, Goldberger takes the reader through a detailed, intriguing, often unexpected, and richly-illustrated history of the intersection of baseball parks, the American city, architecture, urbanism, business, sports, and culture. Always a clear and lively writer, he brings his vast knowledge of cities, architectural history, urbanism, and historic preservation to bear on a building type that differs from many other public buildings and landmarks found throughout the country. Sports facilities, Goldberger notes in discussing the ultimately unsuccessful preservation battle to save Tiger Stadium in Detroit, have histories “which often follow very different trajectories.” Even as the preservation movement grew in strength and matured, it remained a challenge to get club owners and city officials to see the “compelling social and aesthetic value” in a ballpark.

There are four distinct phases in ballpark history in Goldberger’s telling, and each gets a richly detailed section in the book. The first is the period when ballparks were city-bound. Goldberger spends time describing the virtues and challenges of now-demolished ballparks—such as Ebbets Field and Philadelphia’s Shibe Park—and also includes great descriptions of the history and changes to the two remaining parks from that era: Wrigley Field in Chicago and Boston’s Fenway Park.

Next came the almost universally unloved suburban, concrete doughnuts. Goldberger brings the reader through the city-flight era of the 1950s and 1960s and discusses how that period led to abominations such as San Francisco’s Candlestick Park and the Twin Cities’ Metropolitan Stadium, with an exterior that had “something of the air of a 1950s Formica kitchen” and acres of parking  that were “a reminder that it was designed with the expectation that every one of its occupants would arrive by car.”

The third phase began with the 1992 construction of Baltimore’s Camden Yards and led to a long period of building retro-style ballparks. There is a lovely chapter on the heroes behind Baltimore’s move back to the city to construct a ballpark that made it fun to both play and see the game. Some of the best of those that followed—including San Diego’s Petco Park, Target Field in Minneapolis, San Francisco’s Oracle Park, and Pittsburgh’s PNC Park—are covered in depth.

We are only just now entering the fourth—and very ominous—period of sterile corporate campuses/amusement parks, most easily seen through the terrible decision of the Braves to move to SunTrust Park in Atlanta’s far northern suburbs. It was a move away from the city, public space, public transportation, and—most egregious from my point of view—communities of color. Goldberger describes SunTrust as “a mallpark as much as it is a ballpark,” and notes that what makes it different from most of the post-Camden Yards parks is that it “extends the entertainment zone outside the ballpark into a pseudo-urban neighborhood that has been created solely as a complement to the ballpark. It is a simulacrum of a city, which is very different from a real city,” Goldberger notes, as a real city is “created over time, with its mix of different types of buildings, different kinds of neighborhoods, and, most important, different kinds of people.”

Goldberger’s writing on the urban and rural natures of baseball is poetic without becoming sentimental. In his estimation, one of the most important points in building a good place to play the game is that the space be “so open, as to as allude, at least symbolically, to the notion that the outfield extends into infinity.” Thus stadiums with domes and retractable roofs generally fall well short of being great places for baseball. On the other hand, some of the post-Camden Yards generation of ballparks have recaptured this important element in the mixing of baseball’s urban and rural natures. I join Goldberger in finding PNC Park in Pittsburgh to be one of the sport’s best new venues to watch a game and to see the city.

Which brings me back to Citi Field. Once I got through the parking lot shock, my friend and I enjoyed the experience inside the stadium. The seats were in the 300 section just below the press box—almost identical to the location of my season ticket package at Nationals Park. Yet these seats were lower, we were much more on top of the game, and there were multiple foul balls landing around us all evening. (My seats in Washington are too high for that to happen more than once or twice a season.) The amenities were much better as well, as our seats were directly accessible to one of several “clubs” that featured food a bit better than what I find around Section 313 in Nationals Park. Both the Mets and the Miami Marlins, their opponent for the evening, have had disappointing seasons and were playing out the string during this last week; yet, we saw two grand slam home runs—one by each club—which was a first for me. And while the fans were disappointed in the 8-4 Marlins win, they were great and knowledgeable company during what turned out to be an entertaining game.

After the game, I read Goldberger’s account of how the Dodgers left Brooklyn and the Mets came to play in Flushing. Walter O’Malley, the owner of the Dodgers in the 1950s, wanted to move from Ebbets Field to a new ballpark in downtown Brooklyn at Atlantic and Flatbush Avenues. The autocratic public works czar of New York, Robert Moses, would have none of that. Instead, he wanted to build a new ballpark in Flushing Meadows, Queens, the site of the 1939 World’s Fair and land he controlled. Moses promised to build the ballpark and rent it to the Dodgers, but as Goldberger recounts, O’Malley “had not the slightest interest” in the new site. “To move the Brooklyn Dodgers to a stadium in Queens—and one that he could only rent, not own—was to him, tantamount to leaving the city altogether.” Goldberger continues by noting that to O’Malley, it would not matter if he took the Dodgers “five miles or 3,000 miles” away. If “they were not in Brooklyn, they could be anywhere.” We know how that story ends, of course, with the Dodgers moving 3,000 miles away to Los Angeles and  Brooklyn getting its heart torn out by the loss.

The story comes full circle when Moses finally gets his stadium in Flushing (the original Shea Stadium) which is then replaced by Citi Field—which Goldberger accurately describes as “an urban ballpark without an urban setting.”

In Ballpark, Paul Goldberger has combined two of my personal passions—baseball and cities—and created a rich and engaging saga that is American to the core. I’m indebted to my friend for capturing this remarkable story. Take my advice and treat yourself to a great read to prepare for the playoffs!

*I do have some rules for my bucket-list quest. First, I have to actually see a game at the ballpark. I can’t just drive by. I use to buy a hat of the local team to prove I’d been there, but it was suggested to me that I have enough caps—so that’s no longer necessary. Finally, demolitions have wrecked havoc with these plans. I decided—in a totally arbitrary way, since I am the commissioner and umpire for this game—that if I’ve seen a MLB team in their home ballpark that has since been demolished, then it counts against my list. (My best example is Atlanta-Fulton County Stadium, where I used to catch a Braves game about once a home stand in the early 1980s when I lived in the city. Ah, I still remember those wonderful $5 tickets not far behind the first base dugout!) I am going to try to visit the new stadiums in those cities when I can, but for the purposes of this pursuit, getting to one stadium in my lifetime counts . . . even if it no longer exists.

In reading Paul’s book, I was also reminded that name changes for baseball parks come along every year or two. For those keeping score, here is the list of ballparks visited, some links to stories in my blog, an update on the name(s), and perhaps a few thoughts about how my impressions align with Paul’s careful insights:

Here is the list of ballparks still to be visited. If you live in one of these cities and want to invite me to go to a game with you next year, the answer will, in all likelihood, be yes!

Image: The view from my seat on September 23rd as the Mets played the Marlins at Citi Field during the final week of the 2019 regular season