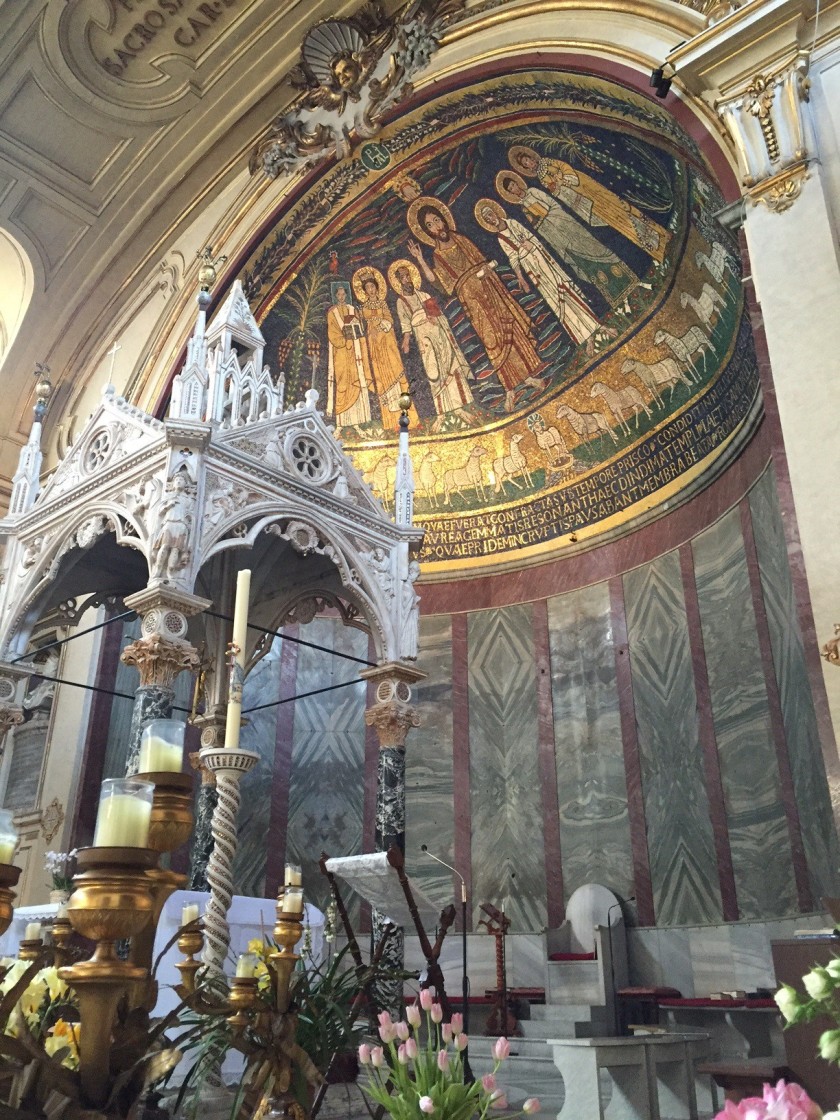 We were directed to the Basilica of St. Cecilia in the Trastevere neighborhood of Rome by two of the more accomplished artists in residence at the American Academy.  When we were talking about the power of place in art, they mentioned having visited this basilica and spoke of its impact.  Candice and I decided to see it for ourselves.

Parts of the basilica date from 822, when an earlier church constructed over the ruins of the home of Cecilia, the young Roman woman who was martyred for her faith, was rebuilt. The outside – with a 12th century tower and 1725 facade – do not prepare you for the work inside.

Cecilia’s story has to be told to understand the power of this place.  From the website Sacred Destinations:

“Cecilia is one of the most popular of Roman saints. She lived in the 3rd century and the first legend of her life was written in the 6th century. A noblewoman from a senatorial family, Cecilia took a personal vow of virginity and pledged her life to God. Unfortunately for her, Cecilia’s parents still married her off.

On her wedding night, Cecilia told her new husband (Valerian of Trastevere) about her pledge of virginity and persuaded him to be baptized. Valerian’s brother Tibertius and another man named Maximus were converted and baptized as well, and the three men began a Christian ministry of giving alms to the poor and arranging for proper burial of martyrs. Eventually they became martyrs themselves for refusing to worship Roman gods.

After burying her husband and his brother, Cecilia was persecuted as well. According to her legend, she was first locked in the caldarium of her own bathhouse for several days. This failed to suffocate her as planned; in fact, she sang throughout the ordeal (Cecilia is the patron saint of music). Next a soldier was sent to behead her, but after three hacks with an axe she was still alive. However, she died of her wounds three days later.“

When you enter the basilica, one’s eye is drawn to the apse, with its mosaics, baldacchino, and a central sculpture. That sculpture transfixes the viewer’s gaze and draws everyone forward.

The graphic sculpture is powerful in its impact.

“The pavement in front of the statue encloses a marble slab with Maderno’s sworn statement that he has recorded the body as he saw it when the tomb was opened in 1599. The statue depicts the three axe strokes described in the 5th-century account of her martyrdom.“

The depiction underscores the incorruptibility of her body (an attribute of some saints). Our experience is that the viewer wants to linger over the sculpture, drawn by its combination of beauty and the horror of the decapitation.

Cecilia’s impact as the patron saint of music was also in evidence when we visited.  A group of French boys and their priests/teachers came into the basilica as we did.  After prayers, a handful of the boys and one teacher came together and began to sing a sacred hymn with the beauty that only boy trebles can produce.  It was magical.

We ended our tour in the crypt, viewing the beautiful mosaics and exploring the archaeological ruins of the house below the church.  As we walked away we both agreed that we had just experienced the power of art and place.

O Nata Lux seems an appropriately beautiful piece of music to offer up in thanksgiving for the patron saint of music.

Jesus, redeemer of the world,

the praises and prayers of your supplicants.

Thou who once deigned to be clothed in flesh.

for the sake of the lost ones,

grant us to be made members

of your holy body.

Image: Mosaics and the Ciborium in Trastevere’s Basilica of St. Cecilia