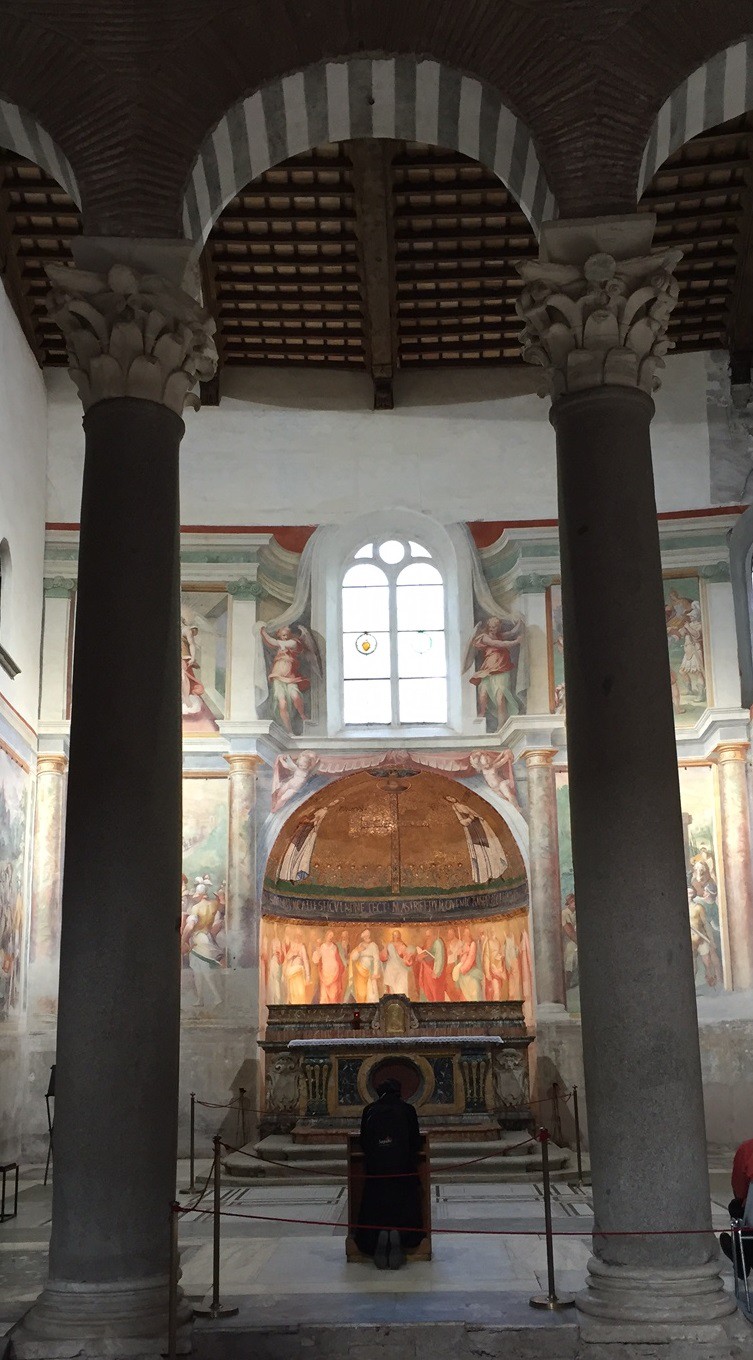 On Andrew’s last full day with us in Rome, he joined Candice and me in visiting three very different churches with widely varying histories, architecture, and art work.  It was a great introduction and send-off for Andrew, as we hoped to whet his appetite for future visits to the city.

It turns out that we’ve had two tours, each consisting of visits to three different churches, this week. So I’ve titled this post “Three churches (part one)” and I’ll get to the other three in a later post.

The first we saw with Andrew is one of the city’s best-known historic sites and regularly shows up on “must see” lists.  The second was recommended by friends at the academy as a “lovely and troubling space” rolled into one.  And the third was found entirely by accident (which is the way we often find hidden gems).

The 12th-century Basilica of San Clemente al Laterano is a minor basilica  that consists of three separate buildings located one on top of the other and dating back to ancient Rome.  The extensive archaeological excavations of both the 4th-century basilica and the buildings of the first century provide visitors with an intriguing history lesson in how the city of Rome developed.  We were fascinated and lingered for a long time in the current church as well as the excavated areas. (The basilica’s policy against photographs limits what I can include, but check out the website for more images.  I did take the few photos you see here after watching a priest stand next to the “no photographs” sign and click away repeatedly with his camera!)

The current basilica – among the most richly ornamented in Rome – contains what has been called a “high point of 12th-century Roman mosaics” as well as a schola cantorum that incorporates marble from the 4th-century basilica when it was abandoned.  The basilica has been cared for by Irish Dominicans since 1667, and it was an Irish priest — Fr. Joseph Mullooly, O.P. — who uncovered the 4th-century basilica and eventually the first-century building in 1857.

Colleagues had encouraged us to descend to the bottom (against the flow of the tour), and take in the first century structure first, and then rise up to the 4th-century building.  We’re glad we did.

The earliest building sits over a spring and has a section that was modified in the second century to facilitate its use as a Mithraeum by members of the cult of Mithras.  There is a second building, separated by a narrow alley, and a long series of small, connected rooms making up this fascinating level. As one climbs a narrow set of stairs the remains of a 4th-century basilica unfold, including tile floors, sculpture fragments, and frescos from subsequent centuries.  This large space was abandoned at the beginning of the 12th century, filled in with rubble to the top of the pillars, and thus provided the new foundation for the current church. This is a marvelous way to spend a couple of hours in Rome, gathering a deeper appreciation for the many layers of history found throughout (and underneath) the city.

We then walked the few blocks to see Santo Stefano Rotondo, the unofficial Hungarian church in Rome.  With its circular plan (the first in Rome, although the exterior is in the form of a crucifix), this church dates from the 5th century.  It is a simple yet majestic space, with a beautiful chapel on one side near the entrance.  (There were originally four such chapels, but three were removed in a later restoration.) While we were there, a group of German tourists under the direction of a priest began to sing, and the acoustics — especially in the center section — were wonderful in supporting the singers and their sound.

Then there’s the art work.

If you ever thought it was easy to be a saint, you  haven’t been to Santo Stefano Rotondo.  Oh my!  The walls of the church are decorated with 34 frescoes of martyrdom, commissioned by Gregory XIII in the 16th century. Each painting has an inscription explaining the scene and giving the name of the emperor who ordered the execution, as well as a quotation from the Bible.

In a word, they are gruesome.

Spiraling around the circular walls, the paintings depict 34 different martyrs — each being killed in gruesome ways. (Molten lead poured down the throat? Check. Breasts cut off? Check. Boiled alive? Check!) Commissioned by Pope Gregory XIII near the end of the 16th century, the paintings are naturalistic in their graphic displays, making anyone who looks closely enough wince. The peaceful expressions on most of the martyrs’ faces go somewhat toward mitigating the”ouch ouch OUCH” effect… although in all honesty, I find that eerie calm a bit more disturbing than convincing.

And if you don’t believe her, the blogger goes on to quote Charles Dickens:

…such a panorama of horror and butchery no man could imagine in his sleep, though he were to eat a whole pig raw, for supper. Grey-bearded men being boiled, fried, grilled, crimped, singed, eaten by wild beasts, worried by dogs, buried alive, torn asunder by horses, chopped up small with hatchets: women having their breasts torn with iron pinchers, their tongues cut out, their ears screwed off, their jaws broken, their bodies stretched upon the rack, or skinned upon the stake, or crackled up and melted in the fire: these are among the mildest subjects.

So take it only if you have a strong stomach!
Finally, we were looking for a more pleasant (read “green”) short cut on our way home when we walked into what looked like a park and wandered down a small road.  Halfway down the hill we stumbled upon the Basilica Santi Giovanni e Paolo – one of the ancient basilicas of Rome and located on the Celian Hill, one of the city’s famous seven hills.

The beautiful tile floor, crystal chandeliers, frescoes, and woodwork made us gasp.  The church was built in 398 and is named for two martyred Roman soldiers – John and Paul.  While it was open, the church did not have any facilities for a tour when we arrived, and it was being set up for an evening concert.  We could see into a couple of the chapels – which were magnificent – and we later learned that the site contains the best conserved Roman era residential building complexes still standing today.  However, it was getting late, and we were tired from all the walking.

The church was lit only by natural light when we arrived, so to see the full splendor, view the images of the church found on the web (especially for weddings) to see it in all its glory.  I suspect you’ll be as amazed as we were on our visit.

Good things come in threes, and that was definitely true with these three Roman churches.  Wonderful stories, fascinating (and gruesome) art work, and layered history you can see and understand.  It made for a very nice afternoon in the city.