Detail of the Frescoes in the Loggia of Cupid and Psyche

If yesterday’s post – full of gruesome scenes of martyrdom from Santo Stefano Rotondo – turned your stomach, we found the antidote today in the pleasures of Villa Farnesina.

Commissioned in 1508 by the wealthy Sienese banker Agostino Chigi and designed by Baldassarre Peruzzi, this suburban villa is at the foot of the hill from the American Academy in Trastevere.  We joined our friend Jeff Cody there for a guided tour and concert of Renaissance music on a beautiful Sunday spring day in Rome.

The Wikipedia entry gives a good description of the difference between this suburban villa and an urban palazzo (or palace).

Renaissance palaces typically faced onto a street and were decorated versions of defensive castles: rectangular blocks with rusticated ground floors and enclosing a courtyard. This villa, intended to be an airy summer pavilion, presented a side towards the street and was given a U shaped plan with a five bay loggia between the arms. In the original arrangement, the main entrance was through the north facing loggia which was open.  Today, visitors enter on the south side and the loggia is glazed.

The facade of Villa Farnesina

The interiors are a delightful display of classical myths and astrological scenes (showing the position of the stars at the time of Chigi’s birth).  This was clearly a party house, and artists, poets, cardinals, princes, and the pope himself were entertained here “in magnificent style.”

So – away with yesterday’s beheadings and attacks by wild dogs – and bring on the nymphs and cherubs for fun and frolic! 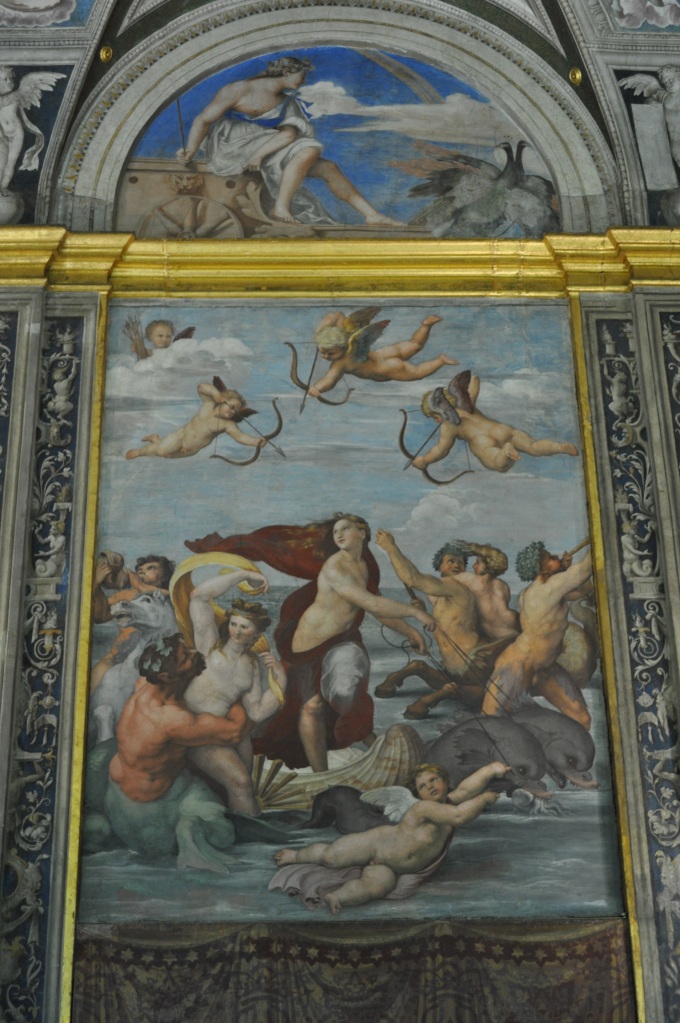 Triumph of Galatea by Raphael in the main hall

Detail from the Loggia of Cupid and Psyche

Ceiling of the Loggia of Cupid and Psyche

We had a delightful day, and recommend the villa for those who need an occasional break from the saints.