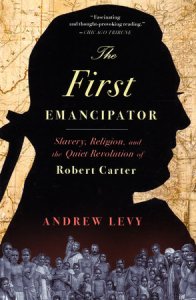 The First Emancipator by Andrew Levy

The story of Virginian Robert Carter III and the emancipation of 450 enslaved individuals shortly after the founding of the United States is one of the forgotten stories of American history.  However, in our current period of political unrest – much of it centered on racism and questions around who owns the American story – this is an appropriate time to look at how this act of emancipation, and similar acts that took place throughout the South before the Civil War, were buried and forgotten.

Thankfully, Andrew Levy’s complex and largely satisfying book The First Emancipator:  Slavery, Religion, and the Quiet Revolution of Robert Carter brought this story the attention it deserves. Levy claims – powerfully and in a way that challenges our core national narrative – that Carter “did something that transcends our ability to listen to our own past.”

A recent tour of the National Trust Historic Site Oatlands outside Leesburg, Virginia, with several senior staff led to a discussion of the story of slavery at the plantation.  Robert Carter III was the grandson of Robert “King” Carter – one of the wealthiest men in colonial America – as well as the father of George Carter, the founder of Oatlands.  As one tours the house, a portrait of Robert Carter III hangs on the wall, with a copy of Levy’s book on a table below.  The guide then explains Carter’s amazing story, and it was all I could do not to walk out immediately and run to the gift shop to buy my own copy.  I had it in hand, however, before leaving.

As told in Levy’s work, Robert Carter primarily watched the American Revolution from the sidelines from his home on the Northern Neck.  However, over the course of some 15 years, Carter went through a religious transformation.  Levy does a wonderful job of showing how Carter began this religious epiphany as an Anglican, then as a Baptist, and finally as a member of the Swedenborgian sect.  The book  showcases the fact that the earliest Baptists in the South were freedom-loving outsiders who pushed against the establishment.  (Very different from the dominant Southern Baptist Convention of the 19th, 20th and 21st centuries in the South.)

This religious transformation led Robert Carter III to file a “Deed of Gift” in 1791 in Northumberland County, Virginia, for the gradual manumission of his slaves, according to the laws at that time which permitted owners to free their slaves as long as certain conditions were met.  Carter’s Deed of Gift is believed to be the largest private emancipation in American history.

Levy tells this story in great detail, and it is worth reading.  However, the most powerful pages in the 200-page work come at the very end.

In his review of Levy’s book, historian Adam Goodheart takes Thomas Jefferson to task, as does Levy in his work.  Jefferson famously wrote of slavery, “We have the wolf by the ear, and we can neither hold him, nor safely let him go.”  However, Carter’s action – and similar emancipations by other well-known figures such as Edward Coles, and Richard Randolph (Jefferson’s cousin) as well as hundreds of property owners forgotten to history – shows that Jefferson was really not looking for an answer to the question of what happens once the slaves are freed.

Especially given the age we find ourselves in now, I want to quote extensively from the last two pages of Levy’s book.

“The possibility exists, of course, that we are the most equitable generation of Americans that have ever existed, and that we have grown comfortable with the ambivalent telling of American history because it is the only fair version.  But we ought to consider the possibility that we are the shapers of history now, and that we have made for ourselves the only Jefferson and the only Washington that seem at home amid the struggling and contradictory progress toward racial equality of the last generation – an age that, like the Revolutionary epoch, was thick with political voices who knew how to say exactly what is right on matters of race but lacked the will to implement any motion that might be perceived as extreme.  It is a sorry tribute we make to Jefferson, Washington, and the other founders that we continue to insist that they were larger than life so that we can blame implicitly our own confusion and ambivalence on the heroic power of their legacy of confusion and ambivalence….

It is infuriating in the early twenty-first century to consider this alternate history, in which Robert Carter is the founding father of the only American Revolution we truly lost.  It is even more infuriating, however, to consider that we have been unable to find a single use for Robert Carter.”

Goodheart’s review picks it up here.

“..Levy ponders his subject’s near-total disappearance from the American consciousness. Unlike Jefferson, Carter ‘does not soothe us, excuse us or help us explain ourselves,’ Levy writes. ‘But what is most incriminating is that he does not even interest us, because that forces us to consider whether there now exist similar men and women, whose plain solutions to our national problems we find similarly boring, and whom we gladly ignore in exchange for the livelier fantasy of our heroic ambivalence.'”

A powerful read in troubling times.