With Candice, Andrew, and Claire (clockwise from bottom left), June 2016 in Philadelphia

I’m lucky to have patient readers of More to Come… as the blog (like my mind) is often all over the place. In looking back over posts from the past year, I decided to highlight the top ten (in terms of views) in a “family and friends” edition, to be followed tomorrow by a “whatever else tickles my fancy” edition, where I’ll catch the posts that don’t directly relate to family members.

Unfortunately, many of the top family posts this year related to death and loss. There were so many losses this year (both family and others who felt like family) that I added a Rest In Peace category to the blog. I’m grateful for the notes and comments these musings brought, but like so many readers I still miss the people who are no longer with us.

Andrew was asked to join Lady Gaga and 50 other survivors of sexual assault on the stage of the Academy Awards as she sang her Oscar-nominated song ‘Til it Happens to You.  We Believe You – my March 2nd post – flowed from that experience.

Andrew with Lady Gaga at the Oscars

Three of the posts revolved around my father’s death in May of 2016, just shy of his 91st birthday.  The first post came the day I learned Daddy had died – May 14th – and was titled R.I.P. Daddy, Tom, Granddaddy.  After the funeral, I posted My Favorite Tom Brown Stories, which captured all the things people had to say about Daddy in the days we gathered to celebrate a life well lived.  A few days later, A Blessing For Our Children, taken from notes in my father’s Bible, spoke to the blessing of unconditional love.

With the children spread from coast to coast, we celebrate the few times we get to have all four of us together.  A Philly Family Weekend was built around the marriage of our dear friend Julia Pentz to Barry Katz.

Claire and Andrew ready for the wedding

In early August, we lost a dear friend in Staunton, Virginia, Ted Jordan, who died after an accident on a construction site.  And When From Death I’m Free, I’ll Sing On was my remembrance of Ted’s many gifts and the music we made together for over a decade.

Adventures in Moving was a late August post that captured a three-day road trip with Andrew, as we traveled to Tennessee to gather furniture from my father’s house and bring it back to our home in Maryland.  Andrew even got to stand in Tennessee and Virginia at the same time. 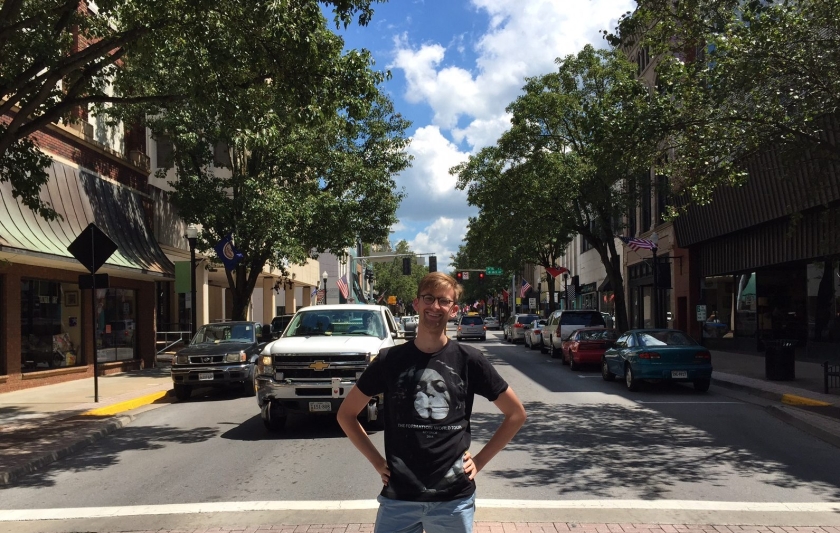 I began writing a short Monday morning email to my staff at the National Trust this year, and I captured these on this blog under the category of “Monday Musings.” One of my posts from my new category made it to the top ten list this year in the family and friends category.  In September, I wrote a blog entitled Hope is Grounded in Memory, which references my Grandmother’s clock as a way of choosing hope in life.

A small symbol of hope

In November, our parish held its Commemoration of All Faithful Departed service, which led to the post Going Out in a Blaze of Glory.  My father was a big fan of Mel Brooks and the movie Blazing Saddles.  If you missed this post the first time, you’ll have to read it now to see how the two fit together.

Each Thanksgiving, I post a special blog of photographs from the year.  It is usually a favorite (perhaps because I link to it in our Thanksgiving letter to friends and family).  Our Year in Photos – 2016 was no different, and this year it included a picture of the visit Claire and I made to see the LA Angels (and check another major league baseball park off my bucket list).

With Claire at the Big A