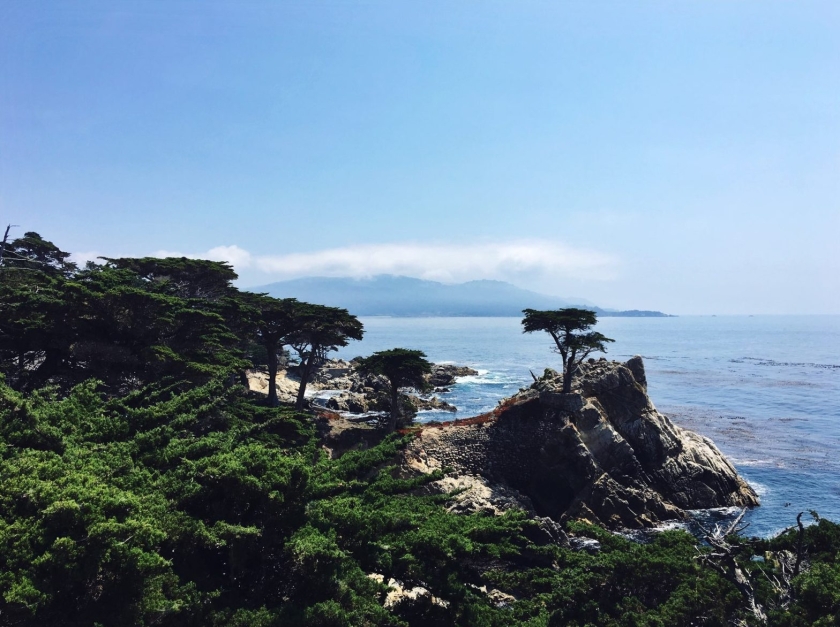 For several years I’ve regularly traveled for work to Monterey, California, a small coastal city some two hours south of San Francisco. So when we went looking for a west coast destination for this year’s family vacation, I suggested we check out the Monterey Peninsula.  Now that we’ve wrapped up a week-long visit to Pacific Grove—next-door neighbor to the city of Monterey—we’re just coming to realize how much we’ve seen and explored in this new (to us) part of the world.

Let’s begin with the coastline, the attraction to visitors for thousands of years.  I awoke every day shortly after 6 a.m. and went for walks of as much as two hours along the well-used (and well-loved) Monterey Bay Coastal Trail.  Pacific Grove’s portion of this 18-mile trail, which follows the path of the old Southern Pacific Railroad train tracks, hews close to the water and rock-strewn coastline, while Monterey’s comes inland a bit to incorporate Cannery Row, the Monterey Bay Aquarium, and Fisherman’s Wharf.  My walk often began before sunrise and was shrouded in fog.  Thankfully, Carmel Coffee Roasters in downtown Pacific Grove opens at 6 a.m. seven days a week, so I was well fortified with java.

Monterey’s submarine canyon is in such close proximity to the shore that the bay has deep, cold, nutrient-rich water all year. This brings all types of marine mammals and sea birds close to the shore.  I enjoyed watching the harbor seals lounge on the rocks and along the beach at the Stanford Marine Institute, listening to the sea lions bark from their perch along the rocks in Monterey, and tracing the flight of a wide array of birds out for their morning breakfast.  I would stop and read along the way and found that Pacific Grove and Monterey have done a good job of capturing the stories and people from their diverse histories.  It was on one of these markers that I learned that Pacific Grove developed an Episcopal camp-meeting history in the 1880s and that Monterey had a very diverse workforce in the commercial fishing and canning industries. That led one wag to suggest that you could tell Carmel-by-the-Sea, Monterey-by-the-Smell, and Pacific Grove-by-God.

We also took advantage of the coastline for a day trip down to Big Sur along California Highway 1.  This coastal road—famous for its stunning views—did not disappoint.  Along the way we stopped to take in the Lone Cypress (technically on the 17-mile road at Pebble Beach), the famous Bixby Bridge, and McWay Falls, a beautiful waterfall that fell into the ocean at Big Sur. We happened to go on a simply glorious day, with no clouds or fog and a California-perfect 80 degrees.

The Monterey Bay Aquarium is the major tourist attraction in the area and after a visit it is easy to see why.  They have crowd-pleasers (how can you resist the feeding of otters and penguins) mixed in with educational exhibits (don’t miss the live-narrated films) and secluded tanks where one can sit and marvel at the amazing creatures found under the surface of the Bay. We spent an entire day at the aquarium and felt we’d only seen a glimpse.

As we were leaving Pacific Grove on Saturday morning, Claire and I took in a Whale Watching tour on the Bay.  It was a wonderful three hours, where we saw a humpback whale breach the water in a way that takes one’s breath away, countless dolphins looking so playful as they swam by, sea lions that came up to give our boat a close look, and sea birds too numerous to capture in a blog post.  Very memorable.

I couldn’t resist the opportunity to take the family over for a behind-the-scenes tour of our National Trust site, the Cooper-Molera Adobe, which will reopen in about a month after three years’ work to reimagine this hub of Monterey history, commerce, and agriculture.  The Barns at Cooper-Molera are already busy hosting special events, and the new bakery and restaurant, along with the re-interpreted historic adobes, will soon be ready to greet the public.

Of course, this couldn’t be a Brown vacation without great food. Two Pacific Grove restaurants became favorites, as we visited both twice over the course of seven days: Passionfish and Jeninni Kitchen + Wine Bar.  And after taking Claire back home to Oakland on Saturday, we had a culinary feast at Alice Waters’ Chez Panisse restaurant in Berkeley, this time in the downstairs restaurant. (Our first visit a year ago had been to the upstairs cafe.)  Here’s a description of what is intended for the restaurant, from the Chez Panisse website:

“From the beginning, Alice and her partners tried to do things the way they wanted them done at a dinner party at home, with generosity and attention to detail. The Restaurant, located downstairs, is open for dinner Monday through Saturday, by reservation only. The fixed menu consists of three to four courses and changes nightly, each designed to be appropriate to the season and composed to feature the finest sustainably sourced, organic, peak-of-their-season ingredients, including meat, fish, and poultry.”

We found it to be one of the most thoughtful menus—and meals—we’d ever encountered. It was delightful, and we were pleased to share it with Claire and her friend Blair, who joined us for parts of the vacation.

Finally, I went on something of a John Steinbeck kick while in Pacific Grove.  I’d begun to read The Grapes of Wrath on the plane ride out to California, as I’d decided this was a good time in our history to revisit this classic tale of the best and worst of America. But while in Pacific Grove, we stopped in a wonderful independent bookstore and I picked up a Steinbeck Centennial Edition of Cannery Row, the short novel/poem on accepting life as it is and putting the highest value on “the intangibles—human warmth, camaraderie, and love.”  Or, as Steinbeck writes early in the novel, “What can it profit a man to gain the whole world and to come to his property with a gastric ulcer, a blown prostate, and bifocals?”

Reading Cannery Row proved to be an unexpected joy in a vacation full of joy and thoughtfulness.  I’ll let Doc’s last words in the book close out this remembrance:

I know that I have savored the hot taste of life

Lifting green cups and gold at the great feast.

Just for a small and a forgotten time

I have had full in my eyes from off my girl

The whitest pouring of eternal light——”