This morning, an interesting question popped up on my wife’s Facebook feed.

“Now that the Nationals 8-game winning streak has ended, should I wash my Curly W socks that I’ve worn throughout the streak?”

Baseball fever has swept Washington, even if the Nationals will not sweep the Astros in the World Series after last night’s 4-1 loss in Game 3. Superstition is a big part of the game, so the question was a serious one.

My answer? Yes! Once a streak is ended, you need to shift to new gear so that the momentum can swing back your way. Luckily, I have enough Nats caps, t-shirts, hoodies, and jackets (at least two of each and more in some instances) to make the change easily. 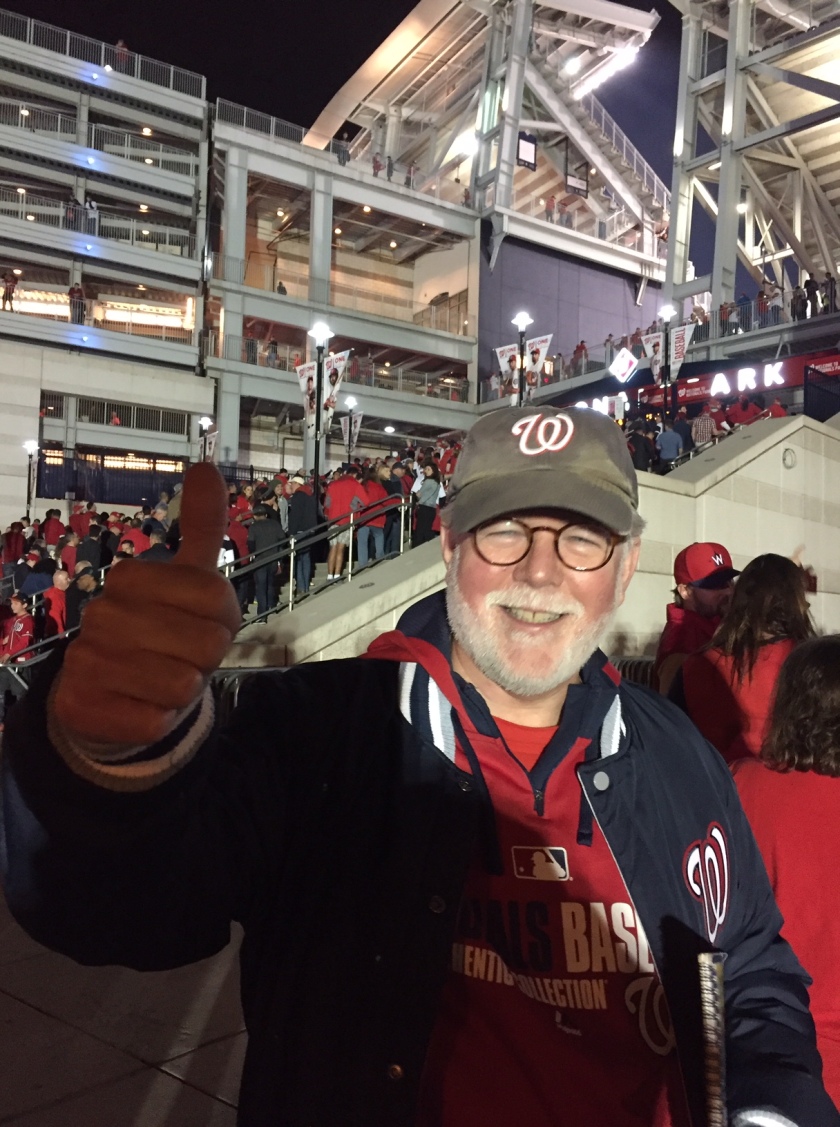 Entering Nationals Park for Game 3 of the 2019 World Series

For all things streak related, I first turn to the best baseball movie ever, Bull Durham. There’s a famous scene about “respecting the streak” where Kevin Costner’s Crash Davis makes the point to Susan Sarandon’s Annie Savoy that players have to respect a streak…and should not change whatever they think is causing their run of good fortune. (Note: the scene is as much about sex as it is about baseball, so the link is for mature audiences only.)

One of our home-team announcers for the Nationals, former player F.P. Santangelo, likes to admonish the viewers to stay in the “same seats” when hits are flying off the Nationals’ bats, or to encourage everyone to move to a different seat when the team needs to break out of a slump.

And baseball being baseball, of course there are multiple online sites with a take on this question, such as “The 50 Strangest Superstitions and Rituals in Baseball.”

I’ll confess that I went to last night’s Game 3 at Nationals Park with some bit of trepidation. My on-site record for playoff games for the Nationals was 1-2, and the two losses were horrific. (Game 5 of 2012 NLDS and the famous 18-inning game of the 2014 NLDS, for those who care.) But I’ve never been to a World Series game in person, and so I threw caution to the win and forked over the money to get a seat.

My biggest tactical mistake was not wearing the same pants I wore for the Nats’ wins in Games 1 and 2. I feared they were a little thin for the October evening temperature, and frankly they looked a little worse for the wear after I wore them stretched out on the couch for two games.

But I had a blast, all the same.

As I’ve said, I have no expectations for this series (or the two that went before) but I just want to enjoy the ride. Last night was no exception. The crowd was terrific. As opposed to some other playoff crowds I’ve been around in Washington, which were heavy on those who wanted to party, the folks in our section were knowledgeable, enthusiastic, but also respectful of the Astros as a talented group of players. It was an exciting game all the way through the last pitch in the bottom of the 9th.

My take on the loss was that the Nationals players were as amped up as the fans, and had trouble controlling their emotions. Any time you leave 10 men on in scoring position without getting them home, you’re not relaxed in a moment of great tension (which is the only way to play the game.) I hope that getting over that first “World Series game at home” hump, and the reality of the loss, will bring them back to the “terrific players having fun” persona that has led them this far.

So, for those who are superstitious, I’ll be home and back in my “winning” seat on the couch (or the “winning” seat at the Silver Branch Brewing Company bar) for the rest of the series.

P.S. – To set the record straight, yesterday’s Washington Post noted correctly that Washington’s last World Series team was the 1948 Homestead Grays of the Negro League, “who defeated the Birmingham Black Barons, four games to one, to cap perhaps the most dominant stretch of baseball in American history.”