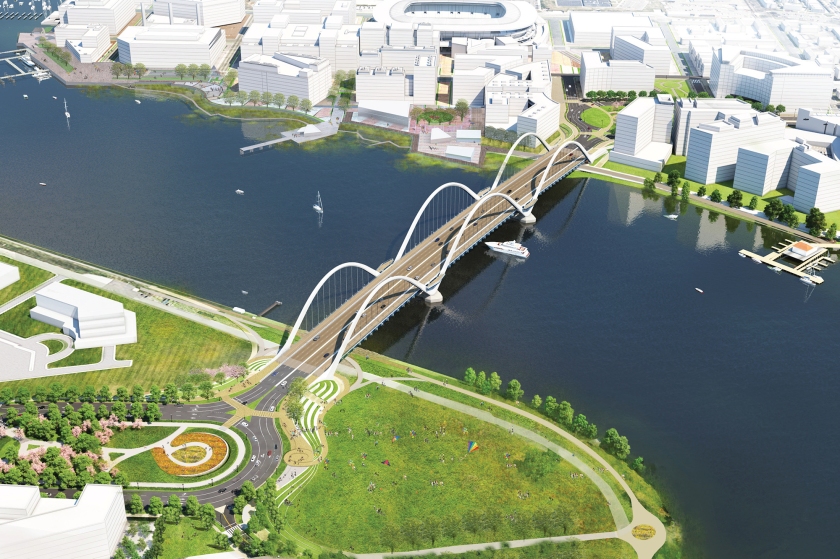 After four years of an administration that turned the words “Infrastructure Week” into a synonym for any “unsuccessful or clumsy attempt to get an actual policy off the ground,” not to mention that administration’s “odd tendency of pushing infrastructure whenever unfavorable headlines start appearing in the news” (i.e., every week), we have a new gang in town. And guess what? They actually know how to get things done.

As always, this Weekly Reader features links to recent articles that grabbed my interest or tickled my fancy. I hope you find something that makes you laugh, think, or cry.

There are questions, mostly political, about what encompasses infrastructure, but bridges are one thing that falls within everyone’s definition. The Washington Post’s art and architecture critic, Philip Kennicott had a wonderful interactive online piece about the good, bad, ugly, and new in the region’s bridges entitled D.C.’s bridges have a complicated history, with the new Frederick Douglass span rising above the rest. (The rendering at the top of the post is of the new Douglass bridge.)

“But although waterways are omnipresent, and often a nuisance (when rush hour arrives), they don’t really give shape to the city’s psychology. Unlike other cities, where urban life throngs to the waterfront, Washington-area residents seem only intermittently in love with their rivers. We know they’re there, and sometimes we visit. But while the map reminds us that the Potomac is tidal and connects us to oceans beyond, mentally, we are landlocked.

Perhaps that explains why, despite the watery setting, Washington is not quite a city of great bridges. Yes, the graceful arches of Arlington Memorial Bridge have an elegance worthy of an old European capital, and the muscular engineering of the Francis Scott Key Bridge has an appealing formal rigor. But for every good bridge, there is a terrible bridge. The vast majority of commuters who cross a bridge en route to the District enter the city on ugly and utilitarian structures, including the 14th Street Bridge and its dispiriting upstream cousin, the Theodore Roosevelt Bridge. Some of the city’s best bridges — those spanning Rock Creek Park — don’t cross a major river. They were built to a higher standard because they served the interests of real estate developers who were creating a privileged enclave of Whiteness in the city’s Northwest quadrant.

A new bridge, however, is rising in Washington, and its soaring arches signal deeper change. The Frederick Douglass Memorial Bridge, the largest infrastructure project in the city’s history with a price tag near $500 million, isn’t just the first major D.C. bridge to reach for the sky — it represents a revolution in how the city thinks about its waterfront. The people who designed and are building it call it a “gateway,” and that word also indicates a transformation in local bridge thinking. Bridges are both functional and metaphorical, and the Frederick Douglass Memorial Bridge is changing the metaphors the city uses to describe its relation to water, waterways and the waterfront.“

Airports and bus terminals are also part of most definitions of infrastructure. But it doesn’t help when you have a bus terminal in an airport, disguised as a gate. Washington managed to pull that off for a couple of decades. Also writing in the Washington Post, Dan Zak speaks for many of us in his less than fond remembrance: DCA airport’s infamous Gate 35X is gone but not forgiven.

“There was no flourish to its badness. Gate 35X at Reagan National Airport did not have the utilitarian exotica of the Dulles people-movers, trundling across a tarmac Tatooine. It did not have the high-low smack of Union Station, where travelers are welcomed by the Roman arches of Constantine but digested through a boarding area that feels like the waiting room of an ER. Gate 35X wasn’t a vortex like the Springfield Interchange, or a labyrinth like the Metro station at L’Enfant Plaza. Gate 35X didn’t qualify as a municipal quirk, like Washington’s lack of a J Street. Gate 35X was just a bus station. In an airport.

Except, somehow, it was more than that. It was a funnel, a choke point, a cattle call. One gate, as many as 6,000 travelers per day. The ceilings were lower. The seats were all taken, as were the electrical outlets. There was no bathroom down there, no vending machine, no water fountain. Dante’s circles were over-invoked. The complaining was olympic.Queues kinked in our slow sprint to somewhere else, through a bay of four doors, via shuttle rides that were short distances but long journeys, onto small regional jets bound for second-tier American cities.“

I flew in and out of 35X dozens of times. It was just as bad as Zak describes it. Good riddence.

We will end with two pieces about Geico’s Scoop, There It Is commercial. Like so many other fans who watched March Madness, I quickly fell in love with the quirky pitch for cheaper insurance. Now, I knew nothing about Tag Team, or — believe it or not — their hit song. So if you are as clueless as me, you should read Clinton Yates enlightening piece in The Undefeated, Behind the delightful success of Tag Team’s hit commercial with Geico.

When senior copywriter Roger Hailes penned those nine words, alongside just two measures of music, he probably didn’t know how many lives would be changed as a result. For the past two months, one commercial has overtaken the advertising world through an incredible coming together of a classic tune, a powerhouse marketing campaign and, of course, the hip-hop capital of the world: Atlanta.“

“…for D.C. Glenn and Steve Gibson, the rap duo from Atlanta, the track that won the 1994 Razzie Award for Worst Original Song has definitely provided them with the last laugh, as well as laughs for plenty of other families for generations to come. You might have called it corny, they called it positive partying. It is most undoubtedly impactful.“

Read the entire article to learn about the improv actors who join Tag Team to make this a memorable pitch that was almost about soup! Thankfully, we got “sprinkles!”

“None of that was scripted, nor was the sprinkles toss, arguably the top moment of a 40-second ad with like 10 of them.

It was conceived as an ode to LeBron James.

‘You know, sprinkles came from an ode to LeBron James where he goes to the scorers table and throws up the chalk. And I know kids love sprinkles,’ Glenn said. ‘I wanted this commercial to be with little kids, saw it, they’d go, mama, I want to party like that.’”

And, of course, all good things must end. Kevin Lutz gives us a helping hand in McSweeney’s with The Five Stages of Grief When Dealing With No Longer Being Able to See the “Scoop, There It Is” Geico Commercial. The third stage is “bargining”:

“’What if I double my GEICO insurance?’ and convince yourself that if you never turn your TV off, the commercial will never stop airing. But these efforts will be futile, as the end of its advertising cycle is out of your control. One of the hardest parts of dealing with loss is realizing you are helpless and that there is nothing you can do to stop the inevitable.”

Have a good week reading.