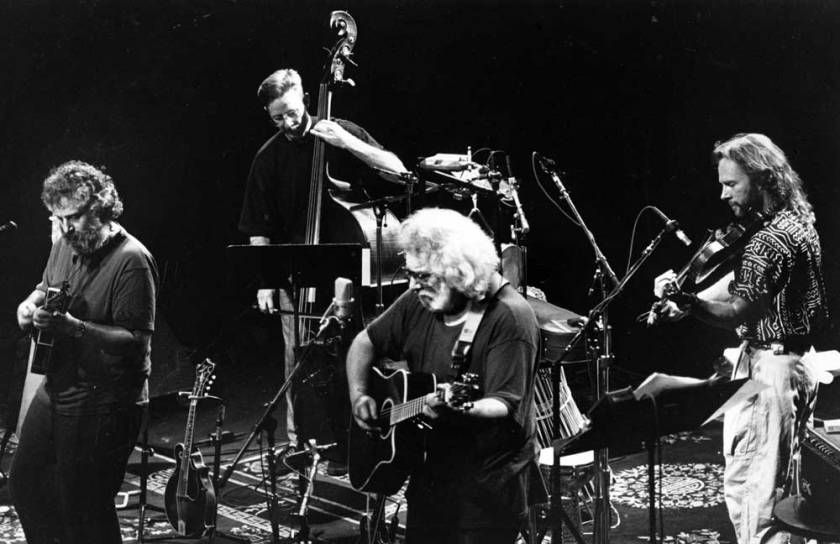 I’m in the San Francisco Bay Area this weekend, so I thought it would be appropriate to point readers toward the collaboration of two musical icons from the area: Jerry Garcia and David Grisman.

Grisman was known as a creative and daring mandolin visionary who came out of the 1960s New York City folk scene in Greenwich Village. Garcia was playing folk ballads, banjo, and early rock n’ roll in California. They first met in the summer of 1964 at a bluegrass show at Sunset Park in West Grove, Pennsylvania. Kindred spirts in pushing the boundaries of music, the rest, as they say, is history.

By 1965, Garcia was playing in the seminal rock band The Grateful Dead, where his legacy was cemented.  Grisman, after first playing professionally with the Even Dozen Jug Band, Red Allen and the Kentuckians and Earth Opera, became a record producer and session player on recordings with Tom Paxton, Judy Collins, James Taylor, Linda Ronstadt and many others. In 1969, Garcia invited Grisman to play on the Grateful Dead’s classic American Beauty. Garcia famously dubbed him “Dawg” and their musical friendship led to the legendary bluegrass band, Old & In The Way, which first played in 1973 in Sausalito, California. Legendary fiddler Vassar Clements later replaced Greene in the band. With some personnel changes including having Taj Mahal join on bass, the band morphed into the Great American String Band in 1974 and played less than a dozen concerts.

As Garcia was becoming famous with the Grateful Dead and a variety of other projects, Grisman “unleashed an acoustic musical revolution with his 1977 release — The David Grisman Quintet, forging a ground-breaking style rooted in high-energy bluegrass, interlaced with elements of jazz and world music.”

As Grisman gravitated to the Bay Area, he maintained his musical friendship with Garcia. In 1990 the two friends played together as a duo for the first time in Mill Valley, California. Grisman gave Garcia the space to return to his acoustic and folk roots with a fellow traveler along the winding musical path they both had taken.

One of their early collaborations was Not for Kids Only, a terrific album that featured folk tunes geared for the younger set. Both of my children can attest to the fact that we listened to There Ain’t No Bugs on Me from that album many a day in our car when they were very little. We all still laugh as we remember the first time Claire sang out the line “How in the hell can the old folks tell / If it ain’t gonna rain no more” from her car seat, with gusto!

The old folk tune Shady Grove was the title track of another Garcia and Grisman album, while the B.B. King chestnut The Thrill is Gone is from another of their Acoustic Disc collaborations.

Garcia passed away in August of 1995, while Grisman continues to make music with his son Samson in the David Grisman Trio and remains a force in acoustic music through his Acoustic Disc label.

Peace, love, and bluegrass from the City by the Bay.