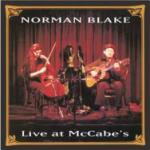 Back in the 1970s, Norman Blake was making his first west coast appearance and he recorded an album at McCabe’s Guitar Shop, which is located on Pico Boulevard here in Santa Monica.  It is a wonderful album for several reasons, but most of all because it showcases Blake’s incredible guitar flatpicking skills.  For those who’ve only heard Blake on O Brother Where Art Thou or on his later albums, there’s always a wonder – as others have noted – at how Blake came to be mentioned among the first guitar greats in the same breath with Doc Watson, Dan Crary, and Clarence White.  When you listen to Live at McCabe’s you no longer ask the question.  Playing solo and with his wife Nancy, Blake gives a tour de force of guitar flatpicking on this album.  I learned Sweet Heaven When I Die from this version many years ago and still play it today – although without Norman’s virtuosity.

I drove past McCabe’s last evening on the way to dinner and was reminded of this album, Norman’s place in flatpicking history, and of this wonderful video of Norman and Tony Rice that I found on YouTube just a few days ago.  Enjoy these two guitar giants as they ride along the New River Train.