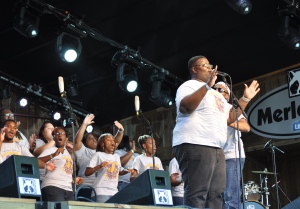 Sunday is “Go to Meeting” day in the South, so it figures that the final day at Merlefest has a heavy gospel flavor.

But because it is Merlefest – and therefore eclectic – you have your choice of shape-note singing, bluegrass gospel, Sunday blues (which should appeal to the non-believers and sinners alike), and black gospel.

I opted for the black gospel sound this year, mostly by default.  (Not surprisingly, I was “late” for church because I slept in after a night of the blues with the Tedeschi Trucks Band.)

But the Lord moves in mysterious ways.  And with the Benedict College Gospel Choir (photo at top of post) the Lord definitely moves!

By the time I arrived, the choir had an enthusiastic crowd at the Watson Stage swaying and singing to that gospel standard Oh Happy Day!  There was testifying by some of the best voices of the weekend (and that’s saying a lot).  It was the perfect way to kick off Day Four – the final day – of Merlefest 25. 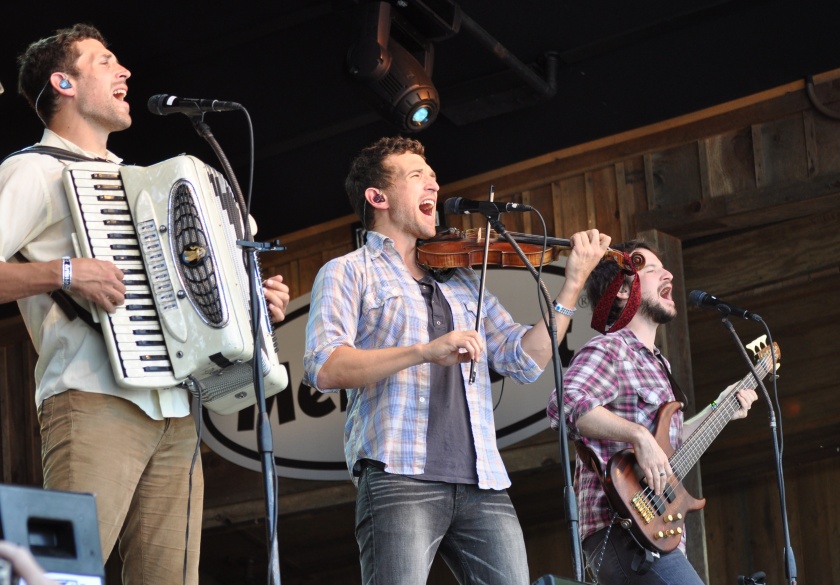 The only band I saw all weekend that could hold its own with the Gospel Choir in terms of getting everyone to their feet was Scythian (above), and luckily they followed on the Watson Stage.  This is a band that blends all sorts of roots music together – one reviewer said the band brings first-generation authenticity to their unique hodgepodge of Irish, Celtic, klezmer, and gypsy influences. Whatever their influences, they bring tremendous energy that is “hard-kicking” and infectious.  It was barely past noon and the joint was jumping. 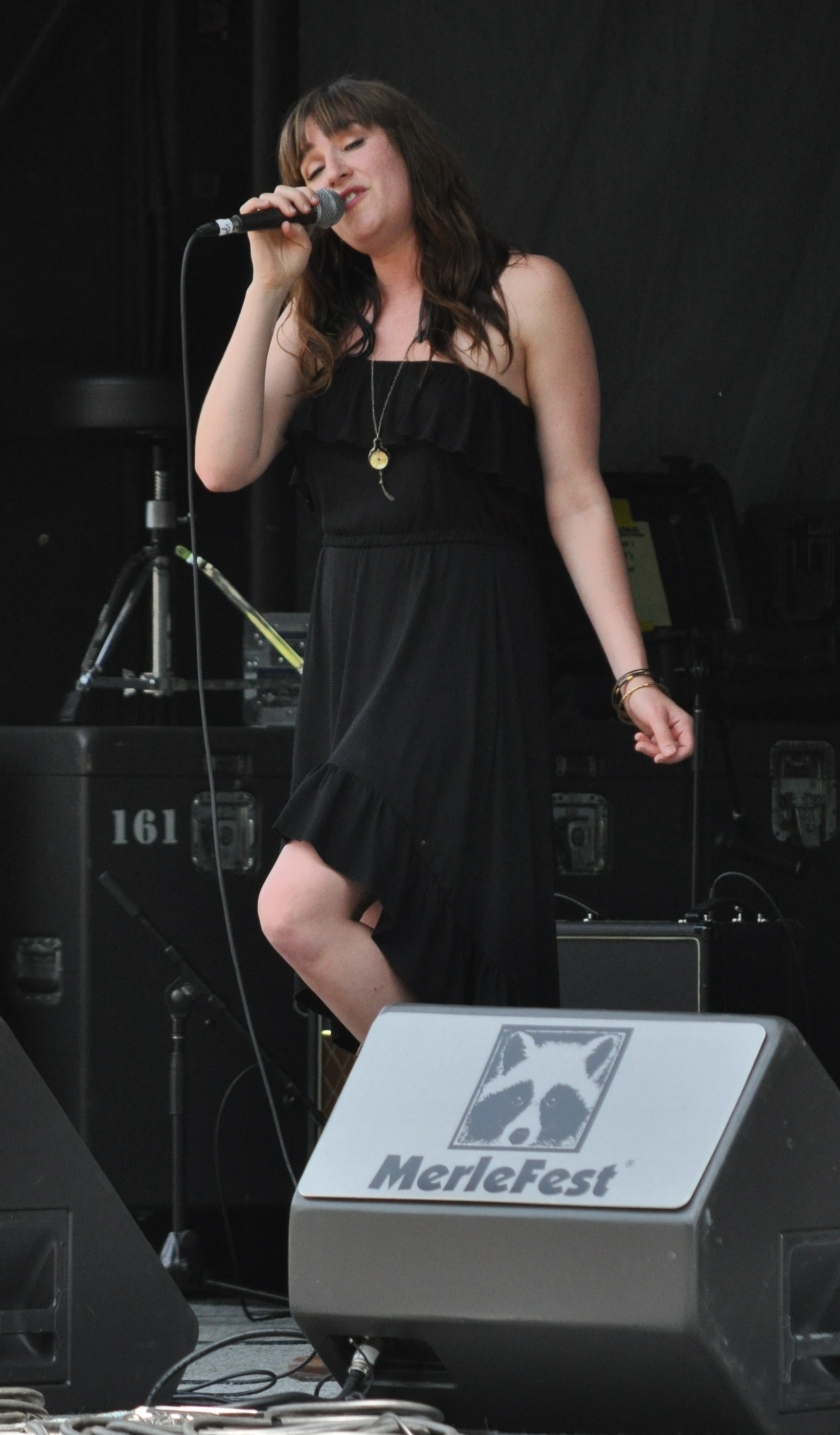 I left the Scythian set early because I wanted to catch Sarah and Christian Dugas at the Americana Stage. I last heard Sarah Dugas (above) at Merlefest as the lead singer for The Duhks, where they were tearing down the Dance Tent with an incredible version of Whole Lotta Love.  On Saturday, Sarah was the primary lead singer for the Hillside Album Hour, where she did a powerful version of Purple Haze, among others.  The band’s Sunday set was just as memorable.  She is an amazing singer with a great set of pipes.  It was turning out to be a happy day all around. 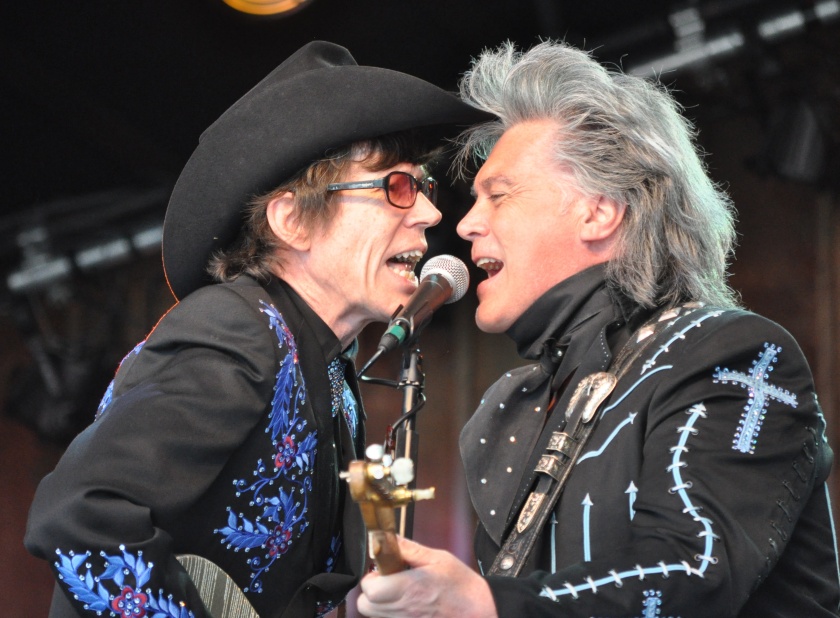 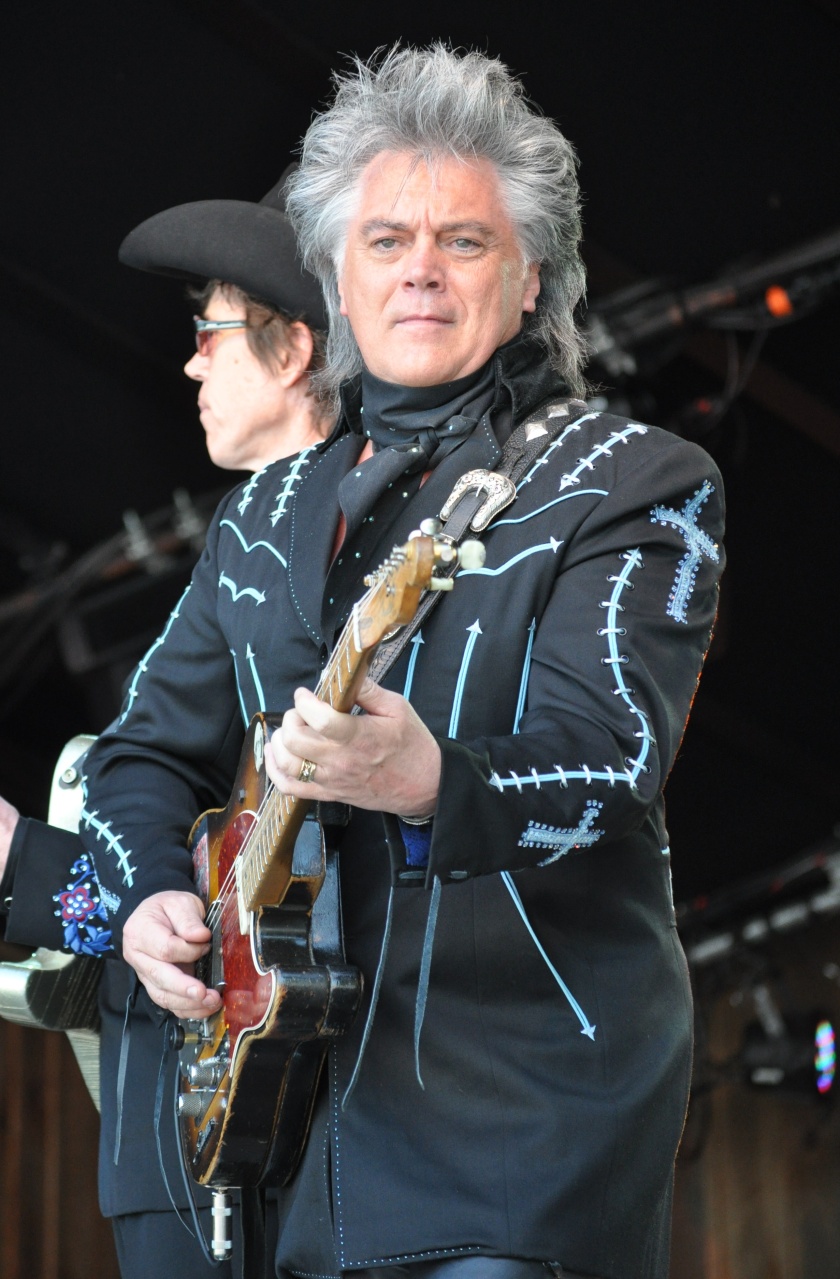 The energy continued with that “high octane hillbilly band” Marty Stuart and His Fabulous Superlatives (above) – the best band name ever. The crowd loved the hits (The Whiskey Ain’t Working Anymore) but I especially liked a quiet, acoustic version of Dark As a Dungeon.  That song has long been a favorite of mine, especially since I heard Guy Clark sing it in a workshop entitled “Songs I Wish I’d Written.”  Stuart, who was at the first Merlefest 25 years ago and traveled for a time with Doc Watson (who hasn’t Marty played with?), did a nice job of remembering his bluegrass roots while focusing on the songs that made him a country music star (with the hair to prove it!).

Stuart’s set was followed by a Cabin Stage appearance by Scottish folk legend Dougie MacLean, which was the perfect bridge to the day’s headliner.  The energy was ratcheted down, but the intensity and musicality were right at the forefront of this 25-minute set.  There was a haunting song written when MacLean realized he was becoming more like his father every day, and his performance won over a crowd that was clearly waiting for AK+US. 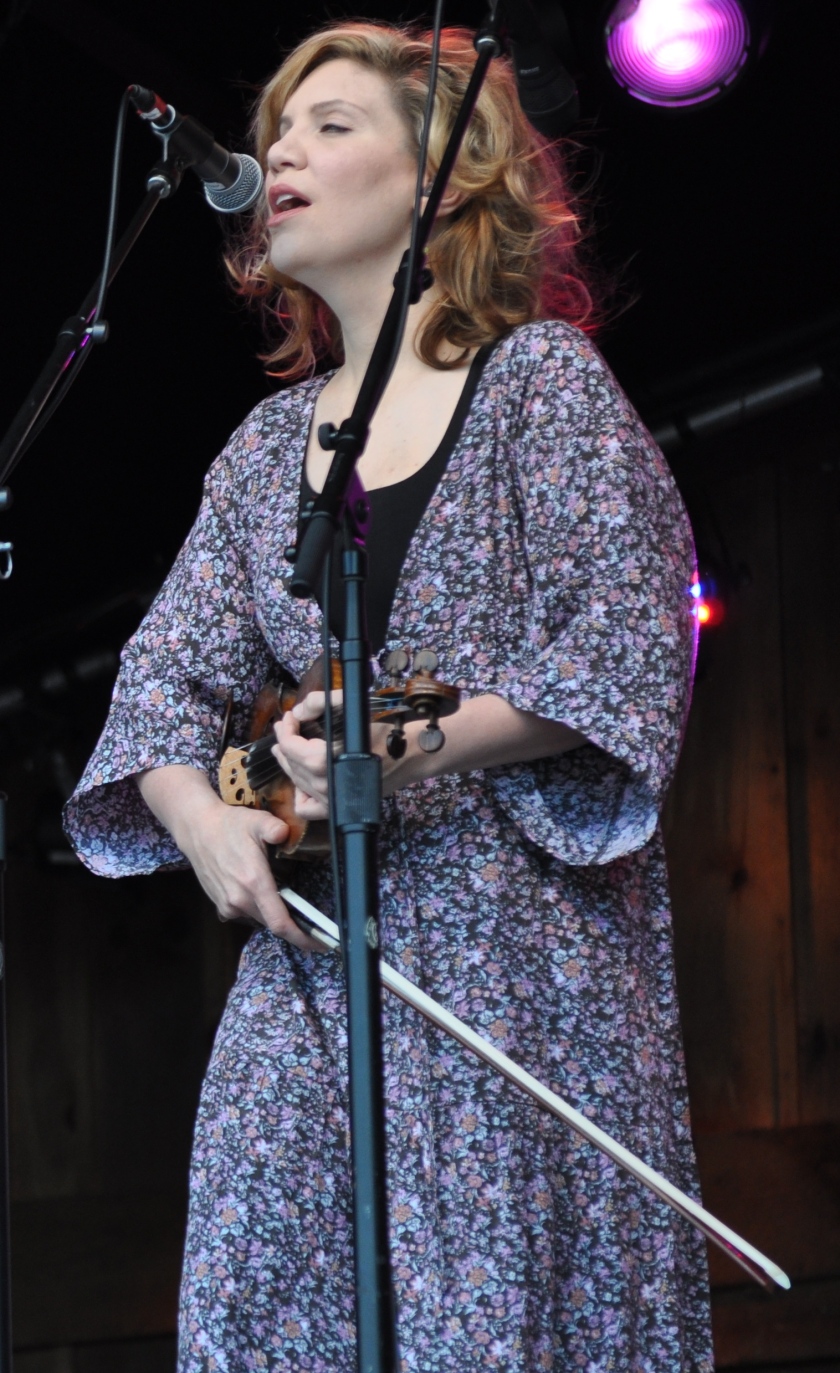 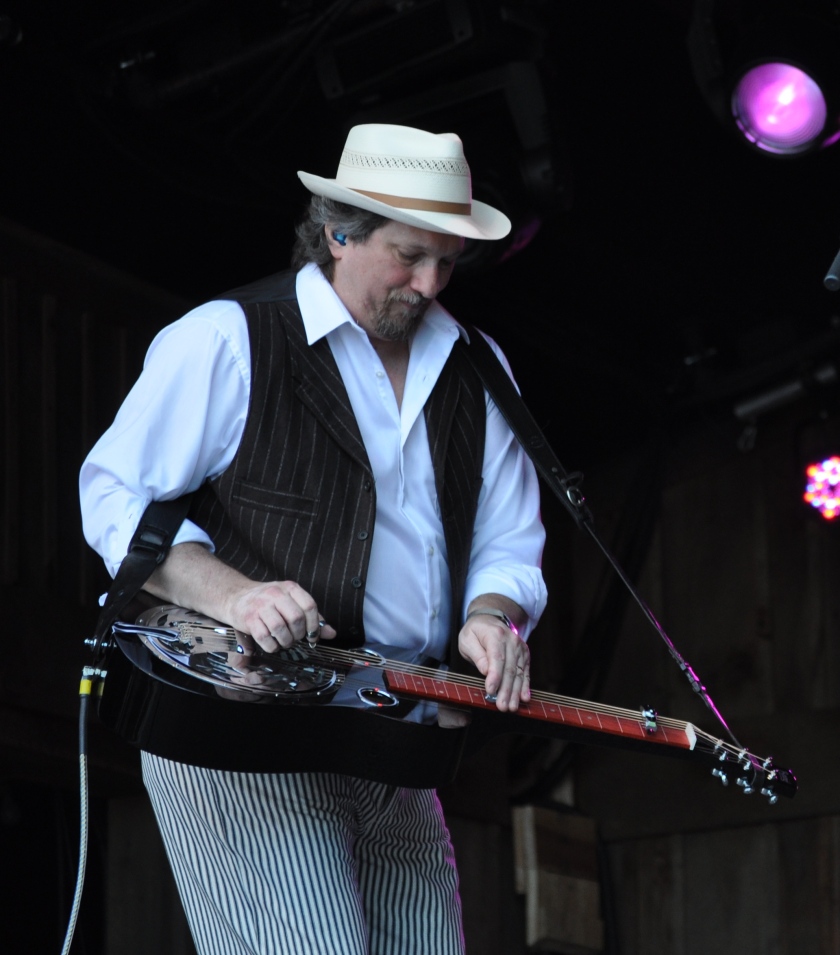 For the only time this weekend, the Watson Stage area was jammed packed as the crowd was ready for Alison Krauss + Union Station Featuring Jerry Douglas (above) – the longest band name ever. With more Grammy awards than everyone else at the festival combined, AK+US didn’t disappoint.  From the first notes of Paper Airplane, through Dan Tyminski’s rendition of Dust Bowl Children, to Jerry Douglas’ high-powered instrumental Who’s Your Uncle, all three “stars” in this band were shining from the beginning.

I actually have a theory about Alison Krauss that was supported again on Sunday.  Every note the band plays is perfect, and they generally stick to the arrangements they put on record.  So it is only in the stage patter that Krauss gets to improvise…and she often goes off the rails with crazy comments.  On Sunday, it was her rambling explanation of why Wild Bill Jones was the perfect “sad song” – because it had everything possible in it that could go wrong in three-and-a-half minutes, with the “cherry on top” of someone getting “jail time.”  I’ve heard that bit of patter before, but then she turned to Tyminski and asked him for his favorite “sad” verse of the song, and they went off on something about Celebrity Apprentice.  Wacko stuff, but she has the voice and musicianship that makes it all seem right.

With a long drive back home in front of me, I hit the road before the crowds, but thanks to “Radio Free Merlefest” at 90.9 I was able to catch the end of the show…and the official end to Merlefest 25.

What a ride it has been.