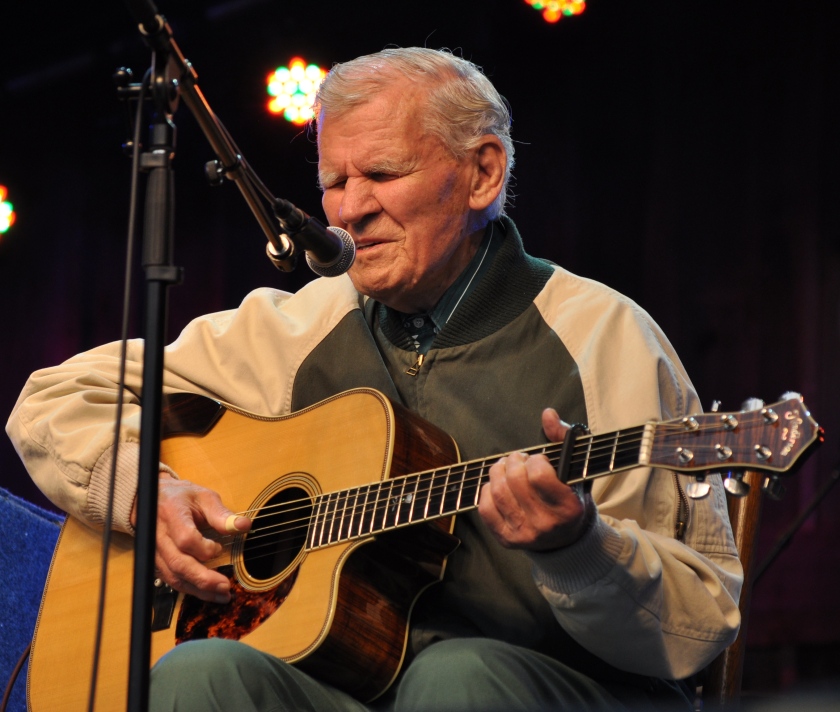 Doc Watson, who passed away today at age 89, was among the most authentic, talented, and influential musicians to emerge from the 60s folk music revival.

He was also the reason I play guitar, attempting to flatpick fiddle tunes or pick out a lead note or two on traditional bluegrass and country songs. Of course, I have to get in line behind tens of thousands — if not more — guitarists who would make the same claim.

So read the New York Times story I’ve linked at the top of the post if you are looking for Doc’s history, background, and influence.  This is a personal post.

I was in high school in the early 70s, learning to play guitar and noodling around with music by singer songwriters and their ilk.  Then one day I brought home this funny looking album — Will the Circle Be Unbroken — and my life was changed forever. Here’s how I described that moment in a More to Come… post in 2009:

“In fact, I suspect that the first two songs on side two clinched the deal (i.e., hooking me as a life-long lover of this music).  I had heard a bit of the blind singer and guitarist Doc Watson over the previous year or two, but no one – before or since – quite captures the beauty of Doc’s guitar and the wonderfulness of his spirit the way producer William McEuen did on the Circle album.  Side Two opens with Doc doing a terrific version of Tennessee Stud that became a signature piece for him for many years.  Then he follows it with a version of Black Mountain Rag, where Doc flatpicks the old-time fiddle tune on guitar and shares the solo spotlight with master fiddler Vassar Clements.  By the end of that track my jaw had dropped and I was hooked.”

I began buying every Doc Watson album I could lay my hands on, and I still have essentially every new album he produced over a career that began in the 1960s and lasted into the second decade of the 21st century. (I didn’t need to buy the compilations or collections, because I had all the originals.) I had Doc as the folkie phenom, Doc and a very young and shy Merle when his son joined him on the road, Doc in Nashville, Doc with Chet, Doc with Dawg. Hell, if Doc played with someone, I had it.

And for a long time, Doc’s rich repertoire of American music was mine. In those pre-internet/YouTube days, I never nailed the great Travis-style picking of Deep River Blues, but it wasn’t for a lack of trying. My picking on Black Mountain Rag has deteriorated some with age, but I sure played that tune enough, moving the needle back time and time again, until I could work through that flashy lick that wraps up the last section of the tune. I learned about the Delmore Brothers, Jimmie Rodgers, and so many more of the pioneers of American southern/country music from Doc.

I quickly decided I had to have the guitar that Doc played, so I saved up my money, traveled 30 miles out in the country to Wartrace, Tennessee, and bought a G-50 Gallagher guitar — the same model that Doc played on so many of his recordings and live shows. It remains among my most important possessions.

And I also started looking for chances to hear Doc and Merle play live. My first experience — at the Exit/Inn in Nashville in the mid-1970s — remains among my most memorable musical experiences. The place was packed, and I was near the front with some college friends, all clutching our flat picks. To hear that voice and to see the musicianship in its prime was sublime. Over the next four decades I saw Doc perform countless times, with all sorts of musicians.  The last time was just last month, when he made an appearance at Merlefest, the festival he helped found following Merle’s death. The picture below shows Doc with New Grass Revival founder Sam Bush at Merlefest 2012. The respect everyone had for Doc could be seen in Sam’s playing. A monster player who loves to rock and roll, Sam always toned it down and played the traditional licks that worked with Doc’s style and sensibilities.

Doc’s music is well documented on YouTube.  And while often cited for his pioneering work as a flatpicker, Doc was also a terrific finger-picker.  This first video shows a young Doc Watson as he appeared when he first hit the “folk scare” (as he would laughingly call it in later life), playing one of his signature arrangements, the Delmore Brothers’ Deep River Blues.

From there, I’ve posted a video from the early 1980s, before Merle’s death in 1985. Doc and Merle are joined by long-time bassist and companion T. Michael Coleman in John Hurt’s classic Make Me a Pallet on Your Floor.

Doc was an inspiration to countless guitarists, and you can see his influence in this video with Tony Rice, Dan Crary, Jack Lawrence, and Steve Kaufman.

Rest in Peace good Doctor.  You were one of a kind and we were all blessed to have you with us for so long.