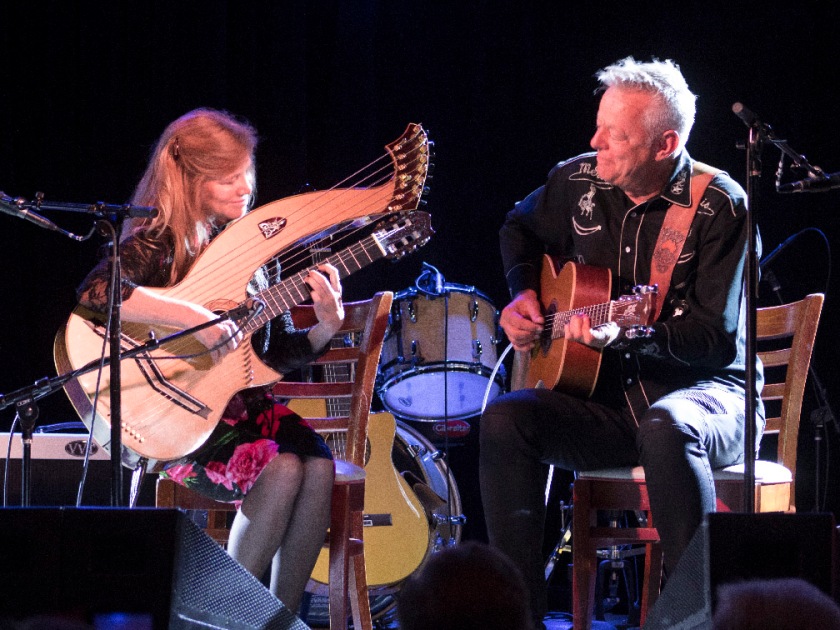 It was a flight like dozens of others I’d taken in the summertime: delayed due to thunderstorms, with the prospect of climbing into bed much later than planned.

When I finally boarded the flight from Nashville after a day’s work on our campaign to save Music Row, it barely registered that my two seatmates had stashed guitars in the luggage bin. This was Nashville, after all. I mumbled a couple of hellos, and promptly fell into my customary power nap. Waking up thirty minutes later, my laptop was opened as I started work on a project that was overdue.

Only after returning to my seat later in the flight did I exchange real conversation with the woman seated in the middle seat, between her boyfriend and me.  I asked what type of guitar she played.  She replied, “One’s a harp guitar and the other is a flamenco guitar.”  Bing!  I suddenly woke up.  Harp guitars are pretty esoteric instruments, and those who play them approach their music with religious zeal.  They also tend to be very good musicians.

I mentioned the music of Stephen Bennett, a harp guitar devotee, whose music I happened to be listening to at that moment on my iPad.  She replied that she knew Stephen, and then seeing that the terrific guitarist and composer Alex De Grassi was next in my musical queue, she said “I’m playing with Alex next week.” She followed that by asking if I knew Tommy Emmanuel, another stellar guitarist.  I replied that I knew his music, but didn’t know him personally, upon which she handed me her headphones and played a video from a recent concert where he joined her for an impromptu—and beautiful—duet on one of her compositions.

At this point I stuck out my hand and said, “Hi, I’m David Brown.”  She replied, “I’m Muriel Anderson.”

Oh my goodness.  I was sitting next to the woman whom I’d proclaimed my love for to God and the internet, after hearing her version of the Beatles tune Day Tripper. And I had wandered all over BWI airport several years ago trying to find where she was going to play in a gig promoted as BWI Live.

Over the last half hour of the flight we talked guitar makers (her harp guitar was built by Mike Doolin and I showed her pictures of my two Running Dog guitars by luthier Rick Davis), harp guitar festivals, historic preservation and the importance of saving Music Row, and her newest album Nightlight Daylight, which is a two-CD set with music for the morning and music for the evening.  She was pleased that Guitar Player magazine named Nightlight Daylight among the top 10 CDs of the decade but even more pleased, I think, to show me the interactive fiber-optic lighted CD cover.  (Push on the moon and the night stars come out. Very cool!)

This is a musician who has collaborated with some of the best:  the late guitarists Chet Atkins and Les Paul, for example.  Yet she was as engaging, lively, down-to-earth, and interesting in person as she came across on stage and in her music.  When I mentioned the National Trust had a hand in saving RCA Studio A in Nashville, she immediately said, “And you saved Chet’s office!”  I told Muriel that I’d had the privilege of sitting in that very office, finger-picking on a beautiful guitar owned by the man who bought the building at the 11th hour. As we were leaving I said, “I have a Gallagher guitar at home, and I bet you can guess why.”  After thinking a bit she said, “You’re a Doc Watson fan, and that was Doc’s guitar.”  Then she added, “He was my first guitar hero.”  I knew that, having read it online at some point.  He was mine as well.

This experience reminded me—once again—of how much we need to wake up and focus on life. Not all encounters are so serendipitous or pleasurable, and yours—when they happen—will be different.  Perhaps you’ll get to meet the writer you’ve always admired, or gain an insight for work you’ve long sought but needed a serendipitous moment to find.  When it happens it can be wonderful.  Trouble is, you won’t have the chance if you don’t take your head away from the screen or out of the conversation in your head, and talk with real people.

Have a good week, and when a bit of serendipity comes your way, may you be present to receive it.

Image: Muriel Anderson and Tommy Emmanuel — playing together at All Star Guitar Night 2018 as she showed me on my fateful airplane ride.