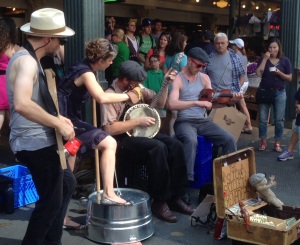 After the long and draining drive on Sunday in our Not All Who Wander Are Lost tour, we spent Monday resting, meeting up with friends, and simply enjoying Seattle.

I always love my trips to this Northwest city, but none more so than this visit when I was able to share some special places with Claire, who was seeing it for the first time.  On recent business trips I have discovered a new favorite hotel in Seattle – the Paramount – and so we woke up Monday morning smack in the middle of Seattle’s downtown.

But we didn’t wake up too soon.  We needed the morning to catch up on sleep and exercise and to finish up the previous day’s blog post, so we had a leisurely morning. And – as you can see – my late nights have caught up with me and these posts are now coming out the following morning.  (I know that a few folks are reading, because at least one family member called Candice to make sure we were okay after not seeing a post early yesterday morning.  Sorry for the scare!)

Yelp came through for us again, as we began walking the streets in search for a breakfast venue. 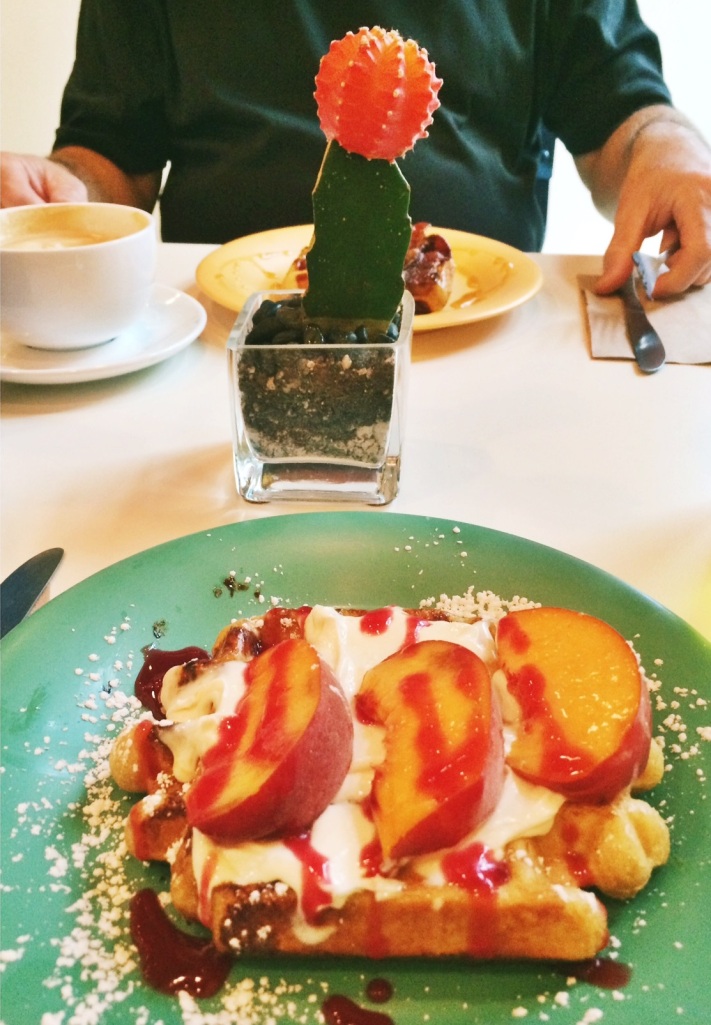 Sweet Iron was a great start to our day, but it wasn’t the last time we encountered tasty Washington State peaches.

Suitably fortified, we spent a couple of hours looking at fountains, stores, and buildings downtown. I recommended we run through a fountain that – in design – was supposed to have a dry passageway between the walls of water.  In execution…well, we experienced some dampness.  Luckily, Monday was the day Seattle topped its high temperature for the year – at 96 degrees – so we dried out before we hit the original, downtown Nordstroms and a few other stores.

As lunchtime grew near, we checked out of the Paramount and headed up to the Pike/Pine neighborhood of Seattle.  Not for Tourists describes the area as

Now, while somewhat true, that seems a little harsh. In fact, the National Trust has an office in Pike/Pine and there are wonderful restaurants and stores, beyond the dive bars and places for vintage clothing. 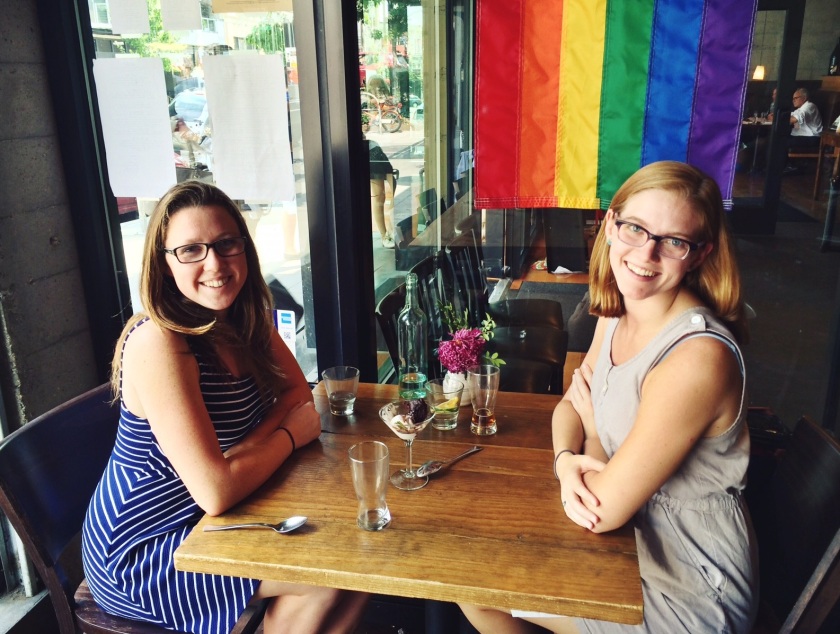 Claire met up with her college friend Gailyn at Plum Bistro in Pike/Pine…which I chose because it is conveniently located above the offices of the Preservation Green Lab, so I could have lunch with my Seattle colleagues at the same restaurant. The food and company (at both ends of the room) were terrific. Then we wandered over to one of the great independent bookstores in the country – Elliott Bay Books – for some shopping.  As I was checking out, the man behind the counter – finding out I was from the DC area – asked what was my bookstore.  I replied, “Why, Politics and Prose, of course.” He quickly agreed, and said that they had a friendly competition over which store had more – and the more interesting – events.  I love independent bookstores…and later today Claire will get introduced to one of the granddaddy’s of the genre: Powell’s City of Books in Portland. We skipped Stumptown in Pike/Pine (my favorite coffee shop)…but maybe we’ll catch that today in Portland as well.

We were in a bit of a rush.  I wanted to show Claire “The center of the known universe” – aka Fremont. For those who know DC, think Takoma Park with more restaurants and dreadlocks. 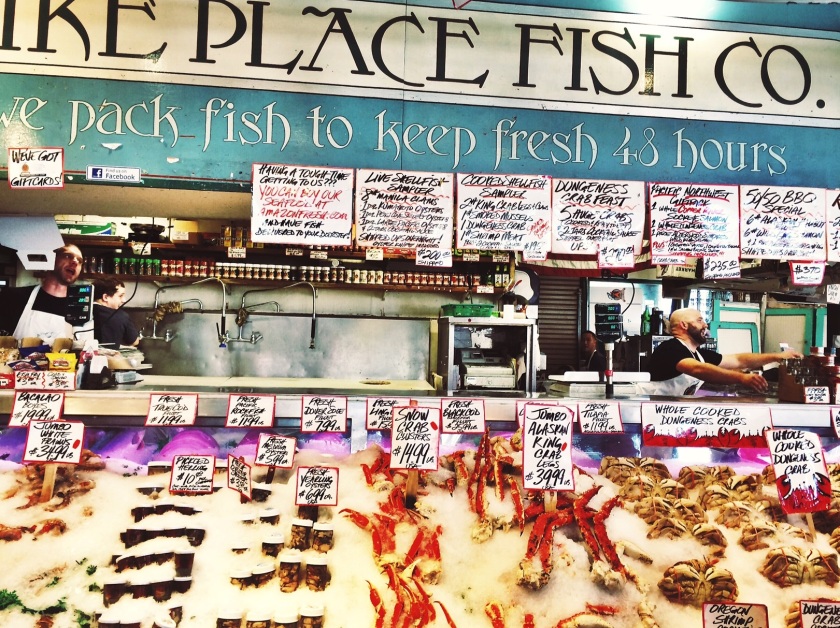 Then we had to take in Pike Place Market before heading south. Claire captured a flying fish on camera at the Pike Place Fish Company (a bit hard to do, as there are many more of us tourists trying to take pictures than there are people actually buying fish that the guys can toss back and forth between the counter and the folks working the floor). Nearby, The Slick Skillet Serenaders were busking to an appreciative crowd (photo at the top of the post), and the shops were brimming with people, flowers, and so much more. 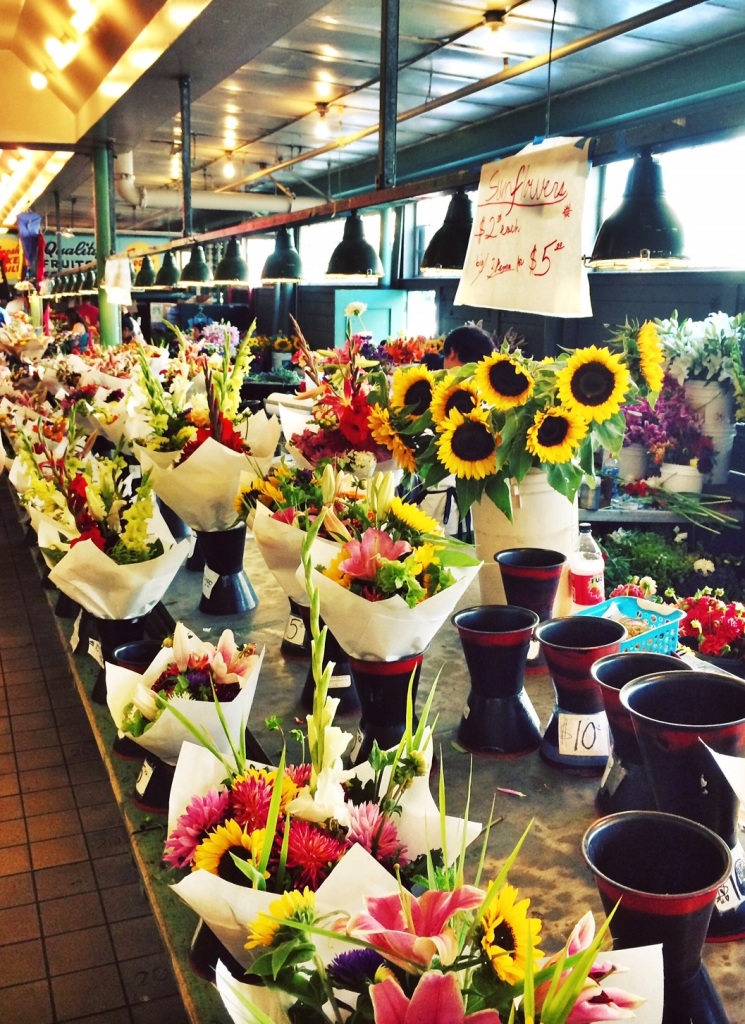 We stopped by to look into the original Starbucks (where we saw our second Nats hat of the trip) and then we bid good-bye to Seattle and headed out for the short drive to Gig Harbor, Washington, where we spent the night with our good friends Shari and Bruce Shull. 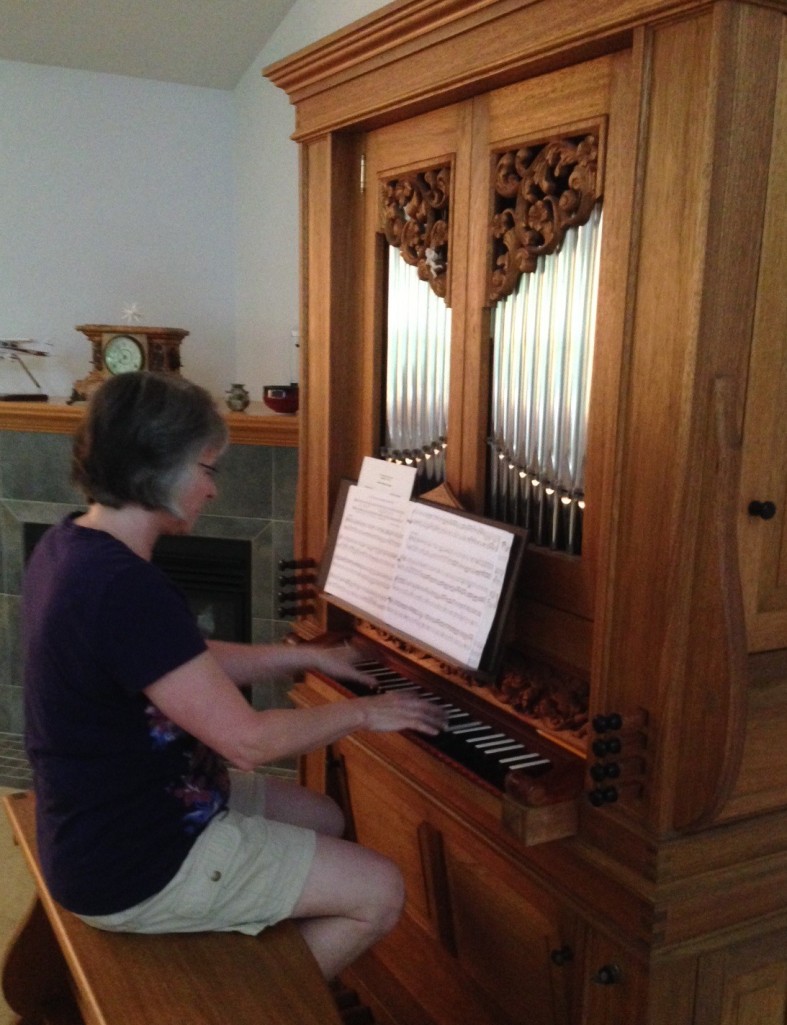 We got to know the Shulls in Staunton, where I sang with Shari in an early-music ensemble called Canticum Novum and Bruce was an organ builder with our friends at Taylor and Boody Organs. Nine years ago, Bruce and Shari moved west where Bruce joined the organbuilders at Paul Fritts and Company. I have written about my love of tracker organs in the past, so as soon as I saw this sweet little organ in their living room, I asked Shari to play some really old-time music for us – which she did with great skill, given that she is a professional organist. 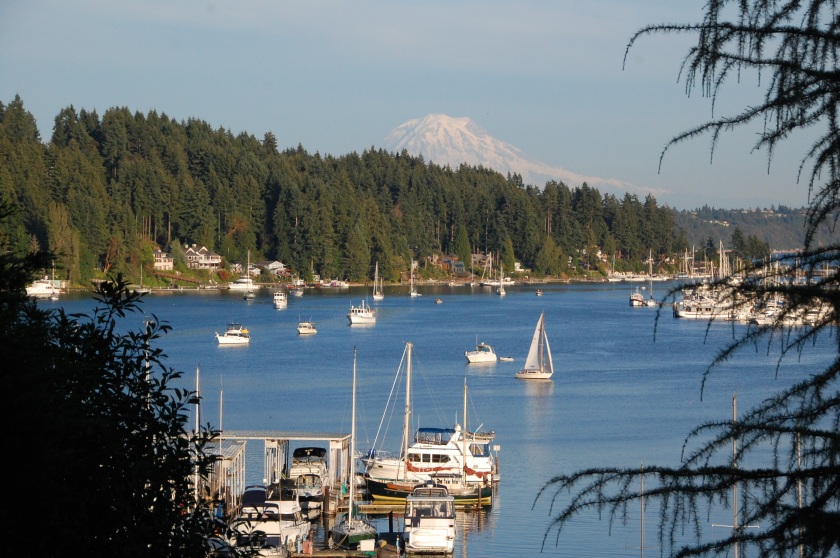 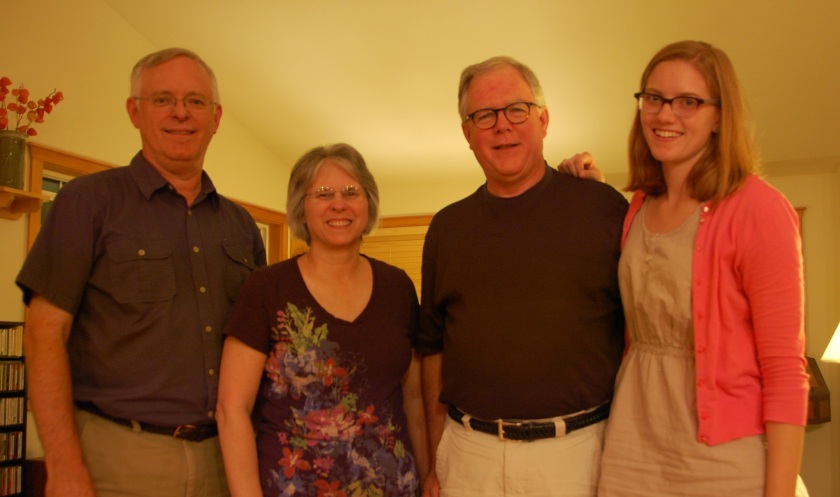 After catching up on family, business, quilt making, planes (Bruce is also a pilot), and the like, the four of us headed down to Gig Harbor (shown above in the photo by Bruce), where we enjoyed a delightful seafood dinner at Anthony’s…and, yes, we did split a sinful peach and ice-cream dessert. It was a wonderful evening.

Today…we’re off to Portland, Oregon which is another of my favorite cities (do you see a theme here?). In fact, Claire mentioned last evening at dinner that she was using this trip to check out places where she might live after college!  Be still my heart – a real chance to come to the Pacific Northwest on a regular basis?  I can just hear Candice sigh all the way across the country.

Oh well, I have a couple of tunes for yesterday.  First, the Old Crow Medicine Show is one of the few bands on both Claire’s playlist and mine, so when Wagon Wheel came up on our drive south yesterday, I told Claire I was going to add that video in honor of the buskers at Pike Place Market.  But then, after hearing Shari play the organ, I decided it was time for a second video, this time of Leon Berben playing on a historic Arp Schnitger organ…which happens to be a favorite organ builder of the Shull family. (I can’t tell how I know this secret!)