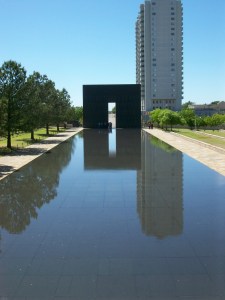 Five years ago, I visited the Oklahoma City National Memorial, erected to memorialize the lives lost, and wrote this post about that place and the need for remembrance.

In his recent series about Why Old Places Matter?, my  colleague Tom Mayes wrote about the importance of memory.  He quotes Randall Mason in noting that “Memory is an essential part of consciousness….”  Tom adds, “Memory contributes to the sense of continuity. Memory also gives people identity—both individual identity and a collective identity.”

No place demonstrates that better than the Oklahoma City National Memorial. At the 20th anniversary of the events of April 19, 1995, this memorial continues to help us to remember, while also helping us to regain the consciousness we need as humans.