I have just finished reading two books about the American West that were written in 1987 and 1994. As I finished the second one on a rainy Sunday afternoon I thought, “I hope I age as well.”  The older of the two—which I actually read second—was the first book cited by the author of the 1994 work in her “Sources” chapter.  Both are written by women I greatly admire as writers and thinkers.

So enough of the cat and mouse games. 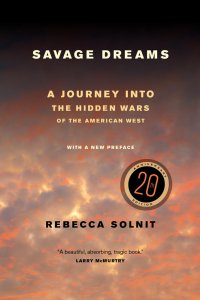 Rebecca Solnit‘s Savage Dreams:  A Journey Into the Hidden Wars of the American West, was republished in a 20th anniversary edition in 2014, with a new preface by the author. I’ve been on something of a Solnit kick lately, as she is one of the most thoughtful of writers exploring a wide variety of issues across the American landscape. This early work is often hailed as a foundational work of environmental thinking.  However, I saw this more as a book about place and unacknowledged history, and the title of the post comes from her 20th anniversary preface.

At the end of Savage Dreams, Solnit lists her sources and calls out Patricia Nelson Limerick‘s The Legacy of Conquest:  The Unbroken Past of the American West for special inspiration.  I have come to know Patty Limerick a bit from recent work we’ve undertaken together, and this book has been on my bookshelf since the early 2000s, which I first heard her speak in Denver.  She is unquestionably one of the leading scholars of Western history.

What I found enlightening about both works was the timeliness of the issues they discuss some 25-30 years later.  Immigration, the dominance of the military-industrial complex, the “owning” of the historical narrative, the complex layers of history that are the reality underneath our myth making of exceptionalism and manifest destiny—all are as present and divisive today as they were as the 1980s turned into the 1990s.

I could delve into so much in these two works, but will be content with a synopsis of each and some quotes that may lead you to want to explore them on your own.  Solnit and Limerick are easy-to-read writers who take a different path in getting to their conclusions.  Solnit’s work here is more of a meandering conversation that, amazingly, arrives at its destination at the end of each chapter and feels very satisfying.  Limerick did not rely on original research in her ground-breaking work, but pulled together strains in New Western study with a style that is easily accessible.

Solnit’s work is actually two books, although they do connect in surprising ways:

“In 1851, a war began in what would become Yosemite National Park, a war against the indigenous inhabitants. A century later–in 1951–and a hundred and fifty miles away, another war began when the U.S. government started setting off nuclear bombs at the Nevada Test Site. It was called a nuclear testing program, but functioned as a war against the land and people of the Great Basin.”

In her preface to the 20th anniversary edition, Solnit notes that she was writing as a period of “making visible, of rewriting history” was underway. She is in the parking lots at Yosemite ten years after her book was written and noticed that the signs had changed, with a “massive reimagining of native America” as the old language of discovery was mostly gone, and the idea of virgin wilderness was seen as outdated.

Right from the beginning Solnit notes that “it’s important to remember that this was not inevitable change but was the work of scholars and tribal spokespeople, activists, and storytellers.”  That is so important in today’s charged political environment, where thoughtful scholarship is often under attack. As she notes, “the people consigned to the past have emerged as our best hope for the future.”

I found this most compelling in the Yosemite story (not to downplay the importance and terrible nature of the test site history).  But as we think about hearing, understanding, and honoring all stories in historic places, I was especially taken by the stories of eradication of the Native American people and story at Yosemite right from the beginning of its conquest by white Americans.  As one small example out of many, the kind of plants growing in Yosemite Valley in the 1850s was largely the work of its original inhabitants.  So when “Bunnell, Olmstead, and their peers rode into the valley and wondered at it for its resemblance to an English landscape garden, it resembled such a garden because it was one.”  Since Yosemite is often considered an American Eden and a touchstone for wilderness, it is surprising (to many) to find that it was an “artifact of generations of human care.” 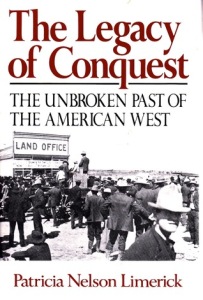 Solnit’s is an activist’s book, which is “about how understanding history and making it are not really very different” to quote one reviewer.  Limerick’s activism is of a different sort.  She seeks to take the story of the “settling” of the American West as “a series of quaint, violent, and romantic adventures—most with happy endings—and a process that came to an end with the ‘closing’ of the frontier in the 1890s” and turn that on its head.  The west is not a process, but a place.  It is a place where competition, profit, loss, uneven business cycles and—always—conquests are what ground its history.

Limerick’s book is also divided into two sections.  First, “The Conquerors” followed by “The Conquerors Meet Their Match.”  In today’s fight over immigration rights, the antagonists on each side could do much worse than read Limerick’s chapter entitled “America the Borderland.”  Limerick notes that this antagonism has been with us from the beginning of our country.

“…some New England Puritans brooded over the presence of Spanish Catholics far to the south; the ‘New World’ seemed less than pure if the papists had a more sizable empire than the Puritans.  Two centuries later, Anglo-Americans moving into the borderlands encountered long-term Hispanic residents.  Much modified by the environment, time, and contact with native populations, northern and southern Europe met in odd circumstances and conflicts between them, unresolved since the Reformation, surfaced again.”

Cliff Dwellings in the Bears Ears area of Southeast Utah, where centuries-old conflicts over the West are still present today

One of the more difficult parts of our past to square with the American myth is the treatment of Mormons. Today’s hatred of “the other” has—it appears—deep historical roots. Limerick dives in here as well, to make the point that just when the reader thinks race is a key factor in dividing people in the West, we come face to face with the Haun’s Mill Massacre.  As she says, this attack by a Missouri militia on a poorly defended settlement, where seventeen were killed and fifteen wounded, “restores one to a realistic confusion.”  All of the victims of this 1838 massacre were white—and Mormon.  She examines the prejudices behind the 1857 Mormon War, which is extraordinary in that the U.S. Army was deployed against a church primarily composed of U.S. citizens.

There is so much here I could explore, but suffice it to say that both Rebecca Solnit and Patty Limerick have written books that are as timely today as they were some 25-30 years ago.  That’s a remarkable place for writers to find themselves.  In these challenging times in which we live in 2017, we do well to remember Limerick’s point that we need to think as anthropologists, because “humans live in a world in which mental reality does not have to submit to narrow tests of accuracy.”

"An old man says to his grandson: 'There's a fight going on inside me. It's a terrible fight between two wolves. One is evil - angry, greedy, jealous, arrogant, and cowardly. The other is good - peaceful, loving, modest, generous, honest, and trustworthy. These two wolves are also fighting within you, and inside every other person too.' After a moment, the boy asks, 'Which wolf will win?' The old man smiles. 'The one you feed.'"