The ORACLE of Takoma Park knows all

It was an easy call as to which Washington region July 4th celebration to attend in 2019.

I’ve been writing about the July 4th parade in nearby Takoma Park for the past decade, and each year has featured a different spin on wackiness. In 2012, it was the precision grill team (with signs of cherry pie and the tag line: “You want a piece of this?!”) along with Mitt Romney’s poor dog Seamus, of the famous car top ride to Canada. Elvis made one of his frequent appearances in 2014, as did the Takoma Park Kinetic Sculpture Racing Team. Last  year was a well-received appearance by the Mad Dog PAC featuring their MAGA (Mobsters Are Governing America) float and stickers.

Admittedly, it will be difficult to match the antics of the “Salute to America” — featuring “your favorite president, me!” — on the National Mall this afternoon, but in looking for the real spirit of America, I know I can find an important piece of it here in the region’s only nuclear free zone. We weren’t disappointed.

In addition to the Takoma Park Kinetic Kommunity, the fantastic ORACLE (two guys in Swami hats driving cupcakes who would answer any question…you had to be there), and the always popular Panquility Steel Band, we saw a return of the Reel Mower Precision Drill Team, reminding everyone that “reel mowers don’t use gas and pollute the air.” Small pushbacks against climate deniers were scattered throughout the parade. 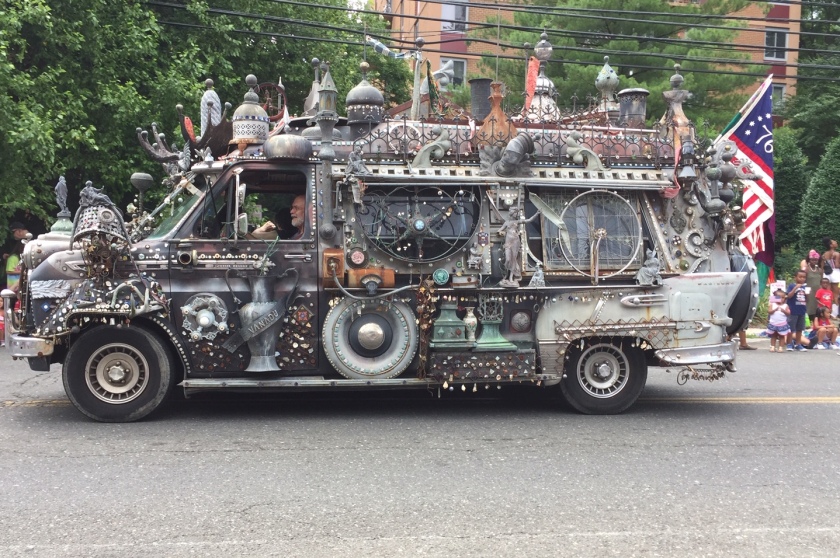 “Vanadu” is a regular favorite that defies description other than it shows the eccentricity of American ingenuity.

Two of the biggest crowd pleasers in this decidedly progressive town — outside of the hardest working man in politics, local Congressman Jamie Raskin — were the Mad Dog PAC float (a Trump-themed rat) and a guest appearance by the Baby Trump blimp, before he heads to the National Mall for the afternoon events. 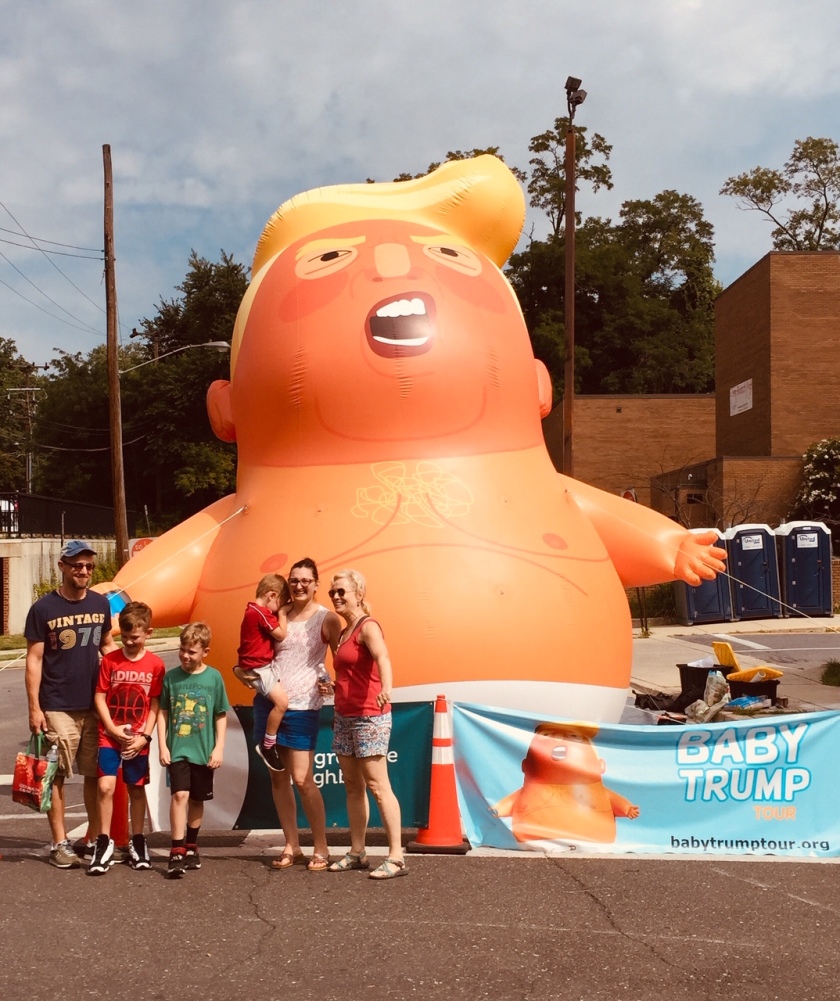 Because it isn’t an election year, we didn’t see quite as many candidates in the parade, but there was still — contrary to the right wing entertainment universe talking points — a diverse group of issues and points of view which were all treated respectfully.  There’s your Seventh Day Adventists Children’s Choir, the Freemasons, the One Leg Up Pet Walkers, the Girl and Boy Scouts, the public works vehicles (love the lawn mower guy spinning around in circles again this year), a variety of public officials from both political parties, the Intergalactic Female Motorcycle Federation, the Green Party, the Silver Spring Yacht Club, and the Takoma Park Lesbians and Gays all mixed together.

When I’m watching the Takoma Park parade each year, I’m reminded of a passage from one of my favorite essays by Lewis Lapham entitled Who and What Is American?

What joins the Americans one to another is not a common nationality, language, race, or ancestry (all of which testify to the burdens of the past) but rather their complicity in a shared work of the imagination. My love of country follows from my love of its freedoms, not from my pride in its fleets or its armies or its gross national product. Construed as a means and not an end, the Constitution stands as the premise for a narrative rather than a plan for an invasion or a monument. The narrative was always plural—not one story but many stories….”

The love of our country follows from the love of its freedoms, not its military might.  The real spirit of America is that complicity in a shared work of the imagination. I’m glad I continue to find it — in all its quirkiness — in a small Maryland community along Maple Avenue.