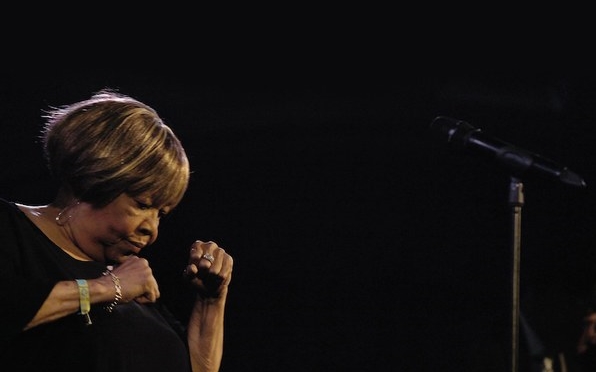 There is no better musical artist to celebrate during The Rev. Dr. Martin Luther King, Jr. weekend than American icon and national treasure Mavis Staples.

Her reach and impact as a once-in-a-generation artist has been astounding. Staples is a member of both the Blues Hall of Fame and the Rock and Roll Hall of Fame, a Grammy Award winner, a Kennedy Center honoree, and a recipient of the National Arts Lifetime Achievement Award. As someone who began singing during the civil rights movement and marched with Dr. King, her longevity in the spotlight is a testament to her magnificent talent. Mavis Staples performed at John F. Kennedy’s inauguration and sang at President Barack Obama’s White House.

“At a time when most artists begin to wind down, Staples ramped things up, releasing a trio of critically acclaimed albums in her 70’s with Wilco’s Jeff Tweedy that prompted Pitchfork to rave that ‘her voice has only gained texture and power over the years’ and People to proclaim that she ‘provides the comfort of a higher power.’ In between records with Tweedy, Staples teamed up with a slew of other younger artists—Bon Iver’s Justin Vernon, Nick Cave, Valerie June, tUnE-yArDs, and M. Ward among others—for ‘Livin’ On A High Note,’ an album The Boston Globe called ‘stunningly fresh and cutting edge.”

Staples was, of course, a member of the iconic Staple Singers with her siblings Yvonne, Cleotha, and Pervis, and their father, “Pops” Staples. The group’s music was key to the soundtrack of the civil rights movement of the 1950s and 1960s, and Mavis has been carrying the torch ever since. She turned 80 years old in 2019, and celebrated by releasing her twelfth studio album and first full-length collaboration with multi-Grammy Award-winner Ben Harper. The title track to We Get By, is, as Mavis says, “a song that is gonna help somebody.” She loves to sing songs that “brings somebody closer.” Now in her ninth decade, Mavis continues her life’s work for love, faith, justice, brotherhood, and joy.

There is so much great Mavis music to celebrate, that I’ll just touch the tip of the iceberg and encourage you to go down the YouTube rabbit hole on your own. O Happy Day with Mavis and Aretha Franklin brings together two of the greatest and most powerful Soul and Rhythm & Blues voices not just of their generation, but of all time. (Check out the interplay at about the 1:50 segment and then again at 4:00. Good gawd!) If you want some movement songs or gospel from the Civil Rights era, you might try Freedom Highway or Wade in the Water.

Mavis has a wide range of musical interests. She can sing the definitive cover version of Bob Dylan’s Gotta Serve Somebody, join in with some gospel soul at the Country Music Academy awards ceremony with Chris Stapleton, and then turn Stephen Foster’s Hard Times Come Again No More into the most aching, soulful, and beautiful interpretation imaginable.

Finally, I’ve always loved the spirit that comes through as Staples rehearses “The Weight” backstage in 2011 with Wilco and Nick Lowe. Watch her supportive love pat of Nick Lowe at about the 1:40 segment, to help him work through the tricky lyrics.

Music, as sung by Mavis Staples, brings people together. Thanks to this wonderful treasure for so much love and good music over nine decades of life.

Image: Mavis Staples from her “Live in London” album