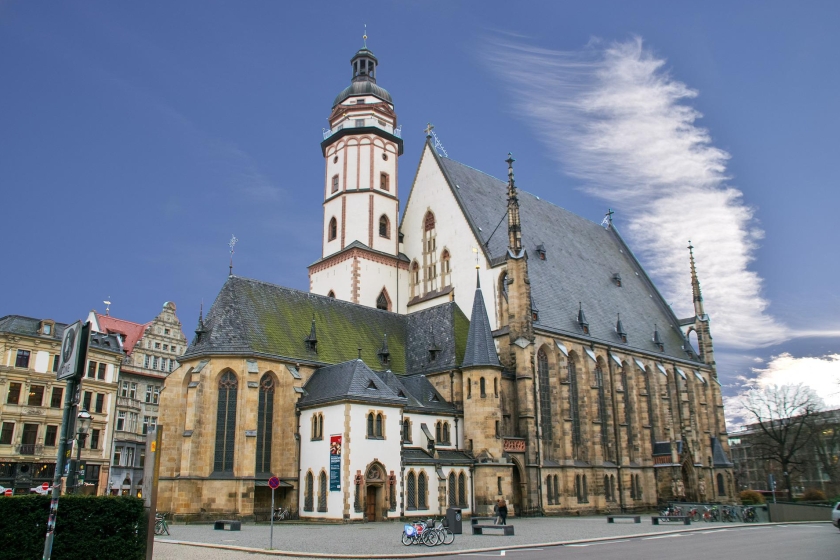 Few things meet us in our heartbreak the way music can. Music “is a way of escaping the world and rising above it”, letting the words and notes “float on the air before coming back down to rest.” We need music at all times, but especially in times of grief and sorrow. Music can be our lament, our prayer. And music can also bring us back to renewal.

The Great Passion (2022) by James Runcie, is “a meditation on grief and music” as imagined through the writing of one of the greatest masterpieces of Baroque sacred music, J.S. Bach’s St. Matthew Passion. The narrator of this historical novel set in 1726-27 is thirteen-year-old Stefan Silbermann, who is sent away to school in Leipzig by his father — an organ-builder — after the death of his mother. Silbermann’s initial weeks at the school are difficult, as he constantly thinks of his mother while fending off the bullies among his classmates. But when he is taken under the wing of the school’s cantor, Johann Sebastian Bach, his life changes permanently.

Over the course of the next several months, and under Bach’s careful tutelage, Stefan’s musical skill progresses, and he is allowed to work as a copyist for Bach’s many musical works. But mainly, drawn into Bach’s family life and away from the cruelty in the dorms and the lonely hours of his mourning, Stefan begins to feel at home. When another tragedy strikes, this time in the Bach family, Stefan bears witness to the depths of grief, the horrors of death, the solace of religion, and the beauty that can spring from even the most profound losses.

Throughout this deeply moving book, Runcie uses the voices and thoughts of J.S. Bach; his second wife, the singer Anna Magdalena; the always attentive Silbermann; and Bach’s daughter Catharina, three years Silbermann’s senior who also lost her mother — Bach’s first wife — when she was young. In their own way, each teaches us how music speaks to grief. Everyone, in every age, experiences loss. But the immediacy of what we can lose is especially present in this eighteenth century setting where mortality is as close as the latest plague or bout of fever.

Over the course of the book, which includes pages of insightful and often delightful dialogue (*), Runcie builds to a crescendo in the final chapters. Bach immerses himself in his work to first create a stunning masterpiece and then to teach it to his musicians at St. Thomas Church in Leipzig. We see how each of the main characters uses music as a way to work through grief. And Runcie, an award-winning filmmaker, playwright and literary curator best known as the author of the seven books in the Grantchester Mysteries series that served as the basis for the PBS Masterpiece series, has captured in a very imaginative way, what it must have been like to “sing, play, and hear Bach’s music for the very first time.”

That music has, of course, lasted through the centuries, and I want to share two arias with you that speak of the power of this work. Stefan’s role in the Matthew Passion is to sing the soprano solo Ich will dir mein Herze schenken, which is sung in the video below by soprano soloist Griet de Geyter with the Netherland Bach Society.

I will give you my heart; / sink within, my Savior! / I will sink into you; / although the world is too small for you, / ah, you alone shall be for me / more than heaven and earth.

The NBS site describes the Matthew Passion, the story of the last days of Jesus, in this way.

He (Jesus) is betrayed, tried, crucified and buried. The lyrics were compiled by Picander (the pseudonym of Christian Friedrich Henrici), probably in close consultation with Bach himself. For their theme, they took the story as told by St Matthew the Evangelist. As different groups or people have their say, the singers get different roles — Christ, Judas, Peter, a slave girl, the pupils, the high priests, the people and the soldiers, etc. At key moments in the story, Bach and Picander added chorales and arias as a reflection of the biblical story. The action is suspended and the events are placed in the theological context of Bach’s day. The chorale lyrics and melodies come from the Lutheran hymn book and were well known to the congregation in Leipzig. Even though Bach’s harmonies were new, everyone would have recognized the melody and the words. The lyrics for the opening and closing choruses and the arias were brand new, however. Both the arias and the chorales often link up seamlessly with the evangelical words.

Erbarme dich, mein Gott is another of the great arias from the Matthew Passion. The Listeners’ Club blog describes it as follows:

We’ll start in one of the most sublime and powerful corners of J.S. Bach’s St. Matthew Passion: the alto aria, Erbarme dich, mein Gott (“Have mercy Lord, My God, for the sake of my tears”). In the drama, this aria reflects Peter’s solitary heartache in the garden after he denies knowing Jesus three times. It’s set in a lilting 12/8 time, suggesting the baroque dance rhythm of the siciliano.

Aching beauty and profound sadness coexist in this music, along with a mix of other emotions which transcend description and literal meaning. The Polish poet and novelist Adam Zagajewski has called Erbarme Dich “the center and the synthesis of western music.” The violinist Yehudi Menuhin called the aria’s lamenting solo violin obligato “the most beautiful piece of music ever written for the violin.”

My son pointed me to the Erbarme dich “for the gravitas. It hits you like a ton of bricks.” This video, also by the Netherland Bach Society, features an amazing counter tenor soloist, Tim Mead, along with Shunske Sato on the violin, from the All of Bach performances.

The Great Passion is a deeply moving and thoughtful book built around one of the masterpieces of western music. Many thanks to my friend (and regular reader) Phil Kopper at Posterity Press for the recommendation.

*There is a wonderful bit of playful dialogue between Bach (the Cantor) and Stefan about the key of music they live their lives in.

Sometimes, I look at people and wonder what key they live their lives in. If you think of your friend, Monsieur Gleditsch, he is all B flat major: cheerful, loving, filled with hope and aspiration. But if you take a man like Stolle, he is B major: emotion and impetuosity and passion. His wife, Sophia, is G sharp minor, the corresponding key. The richer lives are played in different keys, while the plainer stay the same. Think of our rector, Ernesti, forever stuck in D sharp minor, all gloom and anxiety, despite the hope of heaven. If you had a key of your own, Monsieur Silbermann, what do you think it would be?

I don’t know. What would your daughter be?

Catharina? She is B minor, the key of patience, like her mother. If you want to compliment her musically, which is, I think, what you are asking me, you would have to stretch to the triumph and rejoicing of D major, but that seems a little bold for you in your current position. Perhaps you might prefer something calmer, such as E flat major, but then you would probably need to find a partner in C minor. It’s a nice game, don’t you think? When you sing, which key makes you feel most at home?

I’m not sure I ever feel at home.

Then you must try to find your home, Monsieur Silbermann.

Image of St. Thomas Church in Leipzig by lapping from Pixabay