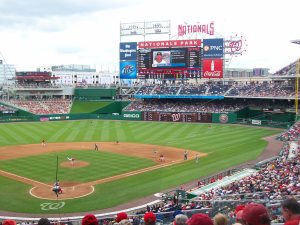 After an amazing streak where the Nats won four in a row from the big bad American League East – including a shutout against the Yankees and two walk-off wins in extra innings against the Blue Jays – they reverted to form today in losing 9-4 in front of a Father’s Day crowd that included the Browns.  Yes, Andrew and Claire sprung for Nat’s tickets for the old man (well, there’s more to the story which I’ll get to in a moment) and we all went for a day of baseball and fried food at Nationals Park.

Even the Nats reverting to their old ways of bad starting pitching, bad relief pitching, and untimely disappearances at key moments by the team’s 3-4-5 hitters couldn’t put a damper on a very nice Father’s Day weekend.

I saw my “celebration” of Father’s Day actually beginning on Friday, when Andrew did some community service work at the Whitman-Walker AIDS clinic and then met up with Claire for time with friends.   I picked them up on Friday evening and we had a fun conversation about life on the drive home.  Saturday brought the first dual meet of the season for the Gators.  Andrew and 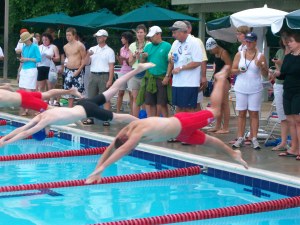 Claire swam a bunch of races and did okay – although the late night with friends didn’t help when they hit the pool at 8:30 on Saturday morning.  Claire was in a relay that finished first and they both dropped time but both said later they felt the effects of the damp weather and high humidity.

Saturday evening the fun continued when we had three couples over for pot luck dinner and home made music.  It was great fun and even though the players came from various backgrounds (folk, rock-and-roll, bluegrass) the music came together surprisingly well.  Having a great blues harp player and a solid acoustic bassist in the bunch sure helped!

Which brings us to today’s game…and the story of the tickets.  We’ve given the twins credit cards (with their picture ID included) for their use when they travel later this week to Northern Ireland with their youth group.   They’ve become pretty good at using them only for essentials, but they decided to go online and buy the Nats tickets themselves.  They chose what looked like great seats, paid for them with their credit card, and then proudly presented the results to Candice.  She gulped when she saw the price and asked me how much baseball tickets should cost.  I told her there was a wide range and her eyebrows just rose silently.

When we arrived today and were escorted to the “stadium club” level with its private dining areas, nice clean bathrooms, and cushioned bottom seats, I finally understood Candice’s comment.  It later dawned on me…Claire goes to Nats games with a very good friend whose family has season tickets right behind the dugout.  The last time I took Andrew, we were guests through work of Bank of America and enjoyed one of their suites.  These seats were just in line with what they were use to!  Oh well, we’ll have a little talk (after Father’s Day is over) about how baseball games look just as great from the half-price seats.  But the sentiment meant a lot to me and we simply decided to laugh and have a great time…which we did.

And if five in a row is too much to ask of the Nats, it still has been a fun week to be a Washington fan.  Next up:  the Red Sox on Wednesday when I’ll go (in much cheaper seats) with a group of die-hard Boston fans from work.  Goooooo Nats!

Few things could be more wonderful to this father than to see his two beautiful and talented children healthy and living lives where they grow, learn, and contribute to the world around them.  I’m lucky that I get to see that every day, but it was especially nice to have the chance this weekend.  Then, to get to play music AND enjoy a baseball game with the family – that just made this a terrific Father’s Day!  It is a good reminder that I”m a lucky man.