On the Friday following Thanksgiving, we decided to spend the day in Los Angeles.  We were on the west coast to holiday with our daughter Claire. Candice, Andrew, and I had flown cross country so we could be together.

The Los Angeles portion of the trip was one of those decisions made after discussing options that would appeal to the entire family.  In the end, we toured a place that had something for everyone…but the family was kind enough to also allow me to indulge in a bit of roots music fantasy along the way.

The Getty Center was the place on everyone’s list. I was the only one of the four who had previously visited Richard Meier’s masterpiece of modern architecture set in the hills above LA, but we had enthusiasm on all fronts.  Claire wanted to see the buildings and gardens, and instantly found the photographic exhibit on display as well. Andrew and Candice wanted to wander the campus and soak in Meier’s vision. I was eager to savor the passions everyone brought to the trip.

As soon as we walked onto the campus, Andrew began pointing out features of the building and the architect’s plan that built upon his modern architecture study in Spain last summer. We couldn’t turn a corner without Andrew or Candice commenting on the architecture – either the juxtaposition of the classic Meier white exterior with the rough-hewn travertine stone that helped set the campus in context, the wonderful view lines, or how the stone was generally set in squares and rectangles while the curves were executed in the aluminum cladding.  Candice became a Meier fan when he designed the High Museum of Art (1983) while she was studying architecture in Atlanta. Andrew saw Meier’s Contemporary Museum of Art (1995) in Barcelona this summer and was eager to immerse himself in more of the architect’s work. Candice and I – who have both studied our share of architectural history – loved having a passionate guide in the family.

When we entered the photography exhibition, Claire’s passions took over.  We all marveled at the Ray Metzker photographs of the city (usually Philadelphia or Chicago) and were glad to see the newest acquisitions of Robert Mapplethorpe’s works to the Getty collection. Claire’s photography training came to the fore as we discussed textures, lighting, and subject matter. I was reminded once again of what a special eye she has for lighting and composition as she called out features of both artists’ work that I simply didn’t see on first glance.

Claire took a few photographs on her iPhone, and I’ve included three here.  But if you want to see some lovely images of this special place, visit The Epicures, the blog of Gemma and Andrew Ingalls of Ingalls Photography.  They are simply stunning. 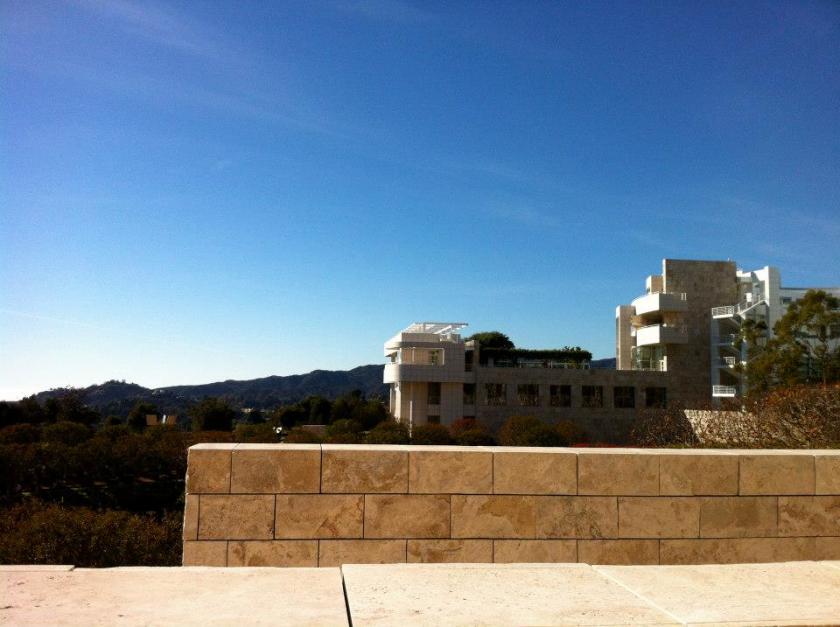 It is a wonderful thing to see your children (and wife) excited about their passions. And since we were on a day trip devoted to fulfilling our passions, I suggested we stop at a special place in Santa Monica to allow me to scratch a certain itch of mine.

I’ve written before about my desire to visit McCabe’s Guitar Shop in Santa Monica. It is one of those legendary music venues and stores in the roots music world. My fascination goes back to Norman Blake’s Live at McCabe’s album of the late 1970s. This album – recorded in the music hall at the rear of the shop – is a gem.

What has made Live at McCabe’s legendary among Blake’s fans is that it is the best showcasing ever of his flatpicking guitar skills. So much of Blake’s attention over the years has gone into other aspects of his music that it is possible to wonder why he is mentioned in the same breath as Doc Watson, Clarence White, and Dan Crary as one of the finest flatpickers ever. The reasons can all be heard on this great record.

So we pulled into a foggy Santa Monica, skipped the restored pier (because we couldn’t see it – or the ocean) and headed straight for McCabe’s. For the next 30 minutes, I roamed from room to room playing Martins, Collings, and Taylor guitars. In the last two years, I’ve bought a parlor guitar and a 000-sized instrument. I was amazed to find more than a dozen of these small guitars hanging on the walls, just waiting for me to pull them down and play a tune or two.  Thirty minutes later (not wanting to push my luck with my patient family), I left satisfied that my two guitars were the ones for me. Thank goodness there was no buyers remorse after checking out a number of other options (after the fact).

One of these days I’ll get around to setting up a bucket list.  And when I do, I’ll be able to check off “visit McCabe’s Guitar Shop.”

Friday was a great day to remind me of the joyous parts of following your passions.  I was fortunate enough to indulge in three:  great architecture, my family, and roots music. What a lucky man!

To leave this post, enjoy a bit of Norman picking Randall Collins and Done Gone with the Rising Fawn String Ensemble.