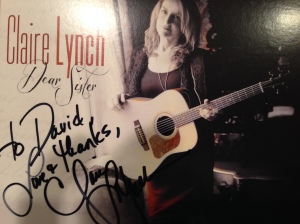 It took 10 months, but the 2014 International Bluegrass Awards caught up with my Best of Bluegrass 2013 post from December. Turns out, my picks were prescient.

The International Bluegrass Music Association (IBMA) awards were presented on Thursday evening in Raleigh, NC.  Three of my five choices from the end of the year were winners at the IBMA showcase.

Let’s begin with congratulations to Claire Lynch for winning the “Song of the Year” award for Dear Sister.  I recognized this as a special song back in 2012, and have loved this tale taken from letters written before the Civil War Battle of Stones River in my hometown of Murfreesboro. Claire co-wrote this lovely tune with Louisa Branscomb. It is one of her best ever, and highly deserving of the award.

Thursday was a big night for banjo phenom Noam Pikelny. His Noam Pikelny Plays Kenny Baker Plays Bill Monroe – one of my picks in December – won Album of the Year at IBMA. This is not just a terrific concept album, it is a terrific album period. Fantastic music from a group of amazing musicians.

Pikelny also took home a second IBMA award – Banjo Player of the Year – which is only fitting for a banjo master who takes a classic fiddler album and makes it his own.

Another pick from my Best of Bluegrass 2013 post – Frank Solivan and Dirty Kitchen – took away IBMA Honors as Instrumental Group of the Year. I wrote about their handling of the Tony Rice instrumental Is That So earlier this year, which convinced me they could tackle just about anything. Congratulations to this DC-area band, which is playing in Arlington on October 12th.

Finally, I also want to congratulate bass player extraordinaire and my friend Tom Gray, who was inducted – for the second time – into the International Bluegrass Hall of Fame this time as a member of the original Seldom Scene.

The three surviving members – Tom, John Starling, and Ben Eldridge – were honored in Raleigh and then joined the current band to play Wait a Minute.  When I spoke with Tom’s daughter Julie this morning at the Silver Spring Farmers Market, it was clear she was so proud of her dad.

She should be…what a wonderful musician and gentleman.

So there you have it.  A wrap-up to a great year of music. There were many other terrific award winners you should check out, but I especially want to congratulate Tom, Claire, and those musicians who have touched me for years.

Let’s go out with the Claire Lynch Band performing the beautiful Dear Sister at WAMU’s Bluegrass Country, here in the nation’s capitol.  Well worth a listen.