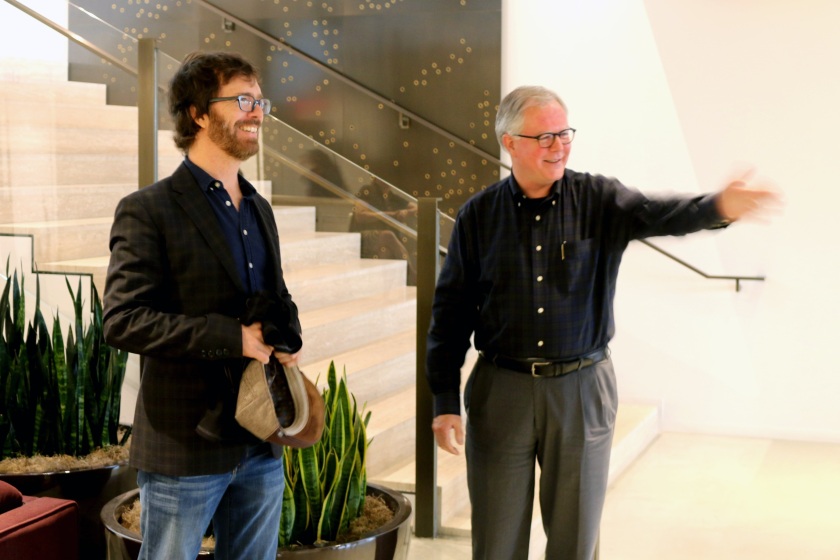 With Ben Folds at the Washington Offices of the National Trust

Even though I already have one of the best jobs in the world, some days at the office are simply better than others. Tuesday was one of those as musician Ben Folds made a stop by the headquarters of the National Trust for Historic Preservation before his concert next door at the Kennedy Center.

The Trust has worked with Ben Folds and others to help save historic Studio A and Music Row in Nashville.  I had a chance to meet him first in January of 2015, when we announced Music Row as one of our National Treasures.  Ben has been one of the heroes of the fight to save Studio A – telling the story of this place as persuasively as he tells stories in his music.

I had the chance to introduce him to our staff yesterday at our headquarters at the Watergate.  I told them that Ben was the early and consistent voice for Studio A, shining a light on this special place when its future was darkest. He was the one who spoke out in the face of Nashville’s rush towards demolition and new development.  His consistent voice led our own Tom Mayes to reach out following a concert at Wolf Trap and offer National Trust assistance.  Ben saw that a wonderful purpose-built studio with incredible acoustics and a history of creativity that included Willie Nelson, Dolly Parton, Tony Bennett, and The Black Keys also had a future.  Thanks to his efforts, that future includes the change of management to producer Dave Cobb and last year’s recording of Traveler by Chris Stapleton – a record that swept every major award and is simply one of the best country music albums, from one of the best country music singers and songwriters, in years.

Finally, I told the staff that Ben helped me realize a life-long dream of a mention in Billboard magazine.

It was great to hear Ben tell his story to our staff and to thank them for all they do for people who want to save special places.

Yep, just a normal day in the office.