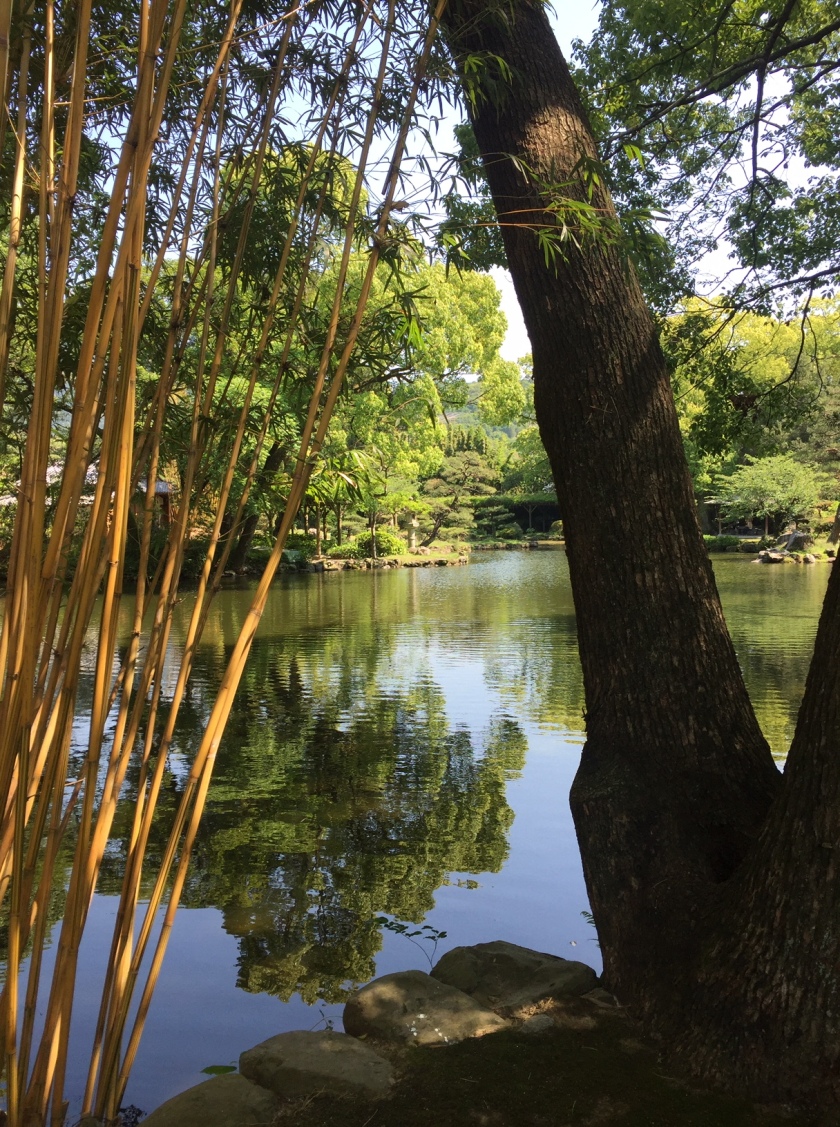 Linking the passions of America’s founding fathers with those of the ruling classes of Asia wasn’t on my agenda when I left for a two-week National Trust Tour of Japan and South Korea earlier this month. Sometimes serendipity just strikes.

It was pure chance that I began reading Andrea Wulf’s Founding Gardeners: The Revolutionary Generation, Nature, and the Shaping of the American Nation as I was leaving for my first trip to Asia. I was absorbed in her illuminating study of the passion for gardening, agriculture, and botany of Washington, Adams, Jefferson, and Madison—America’s best-known founding fathers—as I was entering a world where exquisite gardens were the obsession of Japan’s ruling class.

The juxtaposition was fascinating and delightful.

I became acquainted with Wulf through one of my favorite books, her 2015 work The Invention of Nature, with its description of how Alexander von Humboldt radically reshaped the way we thought of our relationship to the natural world. Founding Gardeners, written in 2011, isn’t as consistently strong, but is an enlightening read in its own right. These four gentlemen (plus Abigail Adams) tied the beauty and bounty of the American landscape to their concepts of liberty and the greatness of their new country. As expected, Thomas Jefferson was a recognized leader in this work, but the surprises here are more with the passions of George Washington, John and Abagail Adams, and James Madison.

In Wulf’s hands, Washington steps down from his perch as American deity to become a farmer (albeit one with slaves—more on that in a moment) with a real passion for the land and its bounty. She recounts how he takes time out every week during the most stressful periods of the revolution and subsequent governmental crisis to write out detailed instructions to his farm manager. Washington read widely in the agricultural and gardening works of the day and corresponded with like-minded individuals across states and oceans, sharing letters, books, seeds, and specimens. At Mount Vernon, he developed a garden that spoke to the vibrancy of the American landscape and experiment in self-government. Madison, likewise, took time from his extensive labor in shaping that government to learn and practice model farming techniques. In fact, Wulf makes the strong case that Madison was one of the first individuals to espouse the notion of conservation, long before Henry David Thoreau or George Perkins Marsh. In Madison’s Address to the Agricultural Society of Albemarle, our fourth president, “did not see nature through a romantic lens of transcendent beauty but as a fragile ecological system that could be easily destroyed by man.”

“In a world where many still believed that God had created plants and animals entirely for human benefit, Madison told the members of the Agricultural Society of Albemarle that nature was not ‘subservient’ to the use of man. Not everything could be appropriated, Madison said, for the ‘increase of the human part of the creation’—if it was, nature’s balance would collapse.”

My main quarrel with Wulf’s book is the consistent absence of the role of the enslaved population in the work of Washington, Jefferson, and Madison. Adams, of course, did not have slaves and his plot at Peacefield in Quincy was much smaller than the gardens of other three. While the enslaved population is mentioned, it is not always clear who was doing the work to take vision to reality. Washington seems to have taken a more direct physical role in the creation of his landscape than the cerebral Jefferson, for instance. More attention by Wulf to the building and care of the gardens by those slaves would have provided a more realistic context for the work and world of the southern founding fathers.

I finished up Founding Gardeners as our plane was touching down in Kyoto, Japan. As luck would have it, our first lecture on this study tour was a look at Japanese garden history by Dr. Michelle Damian. Quoting from a treatise on medieval Japanese garden design named Sakuteiki, Professor Damian highlighted influences on design such as Buddhism, nature (and reflection on memories of a wild nature), geometry (the shape of the land and the desire for balance), and taboos (especially the need to be aware of, and avoid, them). We followed that with tours in and near Kyoto of the gardens at the World Heritage sites Tenryu-ji temple and Kinkaku-ji (Golden Pavilion) temple. Both were stunningly beautiful and set the stage for our later visits to more remote locations along the coastline of the Inland Sea and the Japan Sea.

Temple of the Golden Pavilion

Two exceptional gardens—one quite modern and the other dating from 1676—dominated our visits in the second week of the tour.

The more modern work is at the Adachi Museum of Art, founded in the 1970s by Adachi Zenko and designed to include viewing gardens as well as a collection of modern and contemporary Japanese paintings, especially those of Yokoyama Taikan. Zenko felt an affinity between the works of Taikan and nature, so he constructed superb gardens which could be viewed as one walked through the museum. These gardens are set against the backdrop of the ubiquitous mountains that make up the Japanese landscape. Pulling art, garden, and landscape together made for an unforgettable experience. 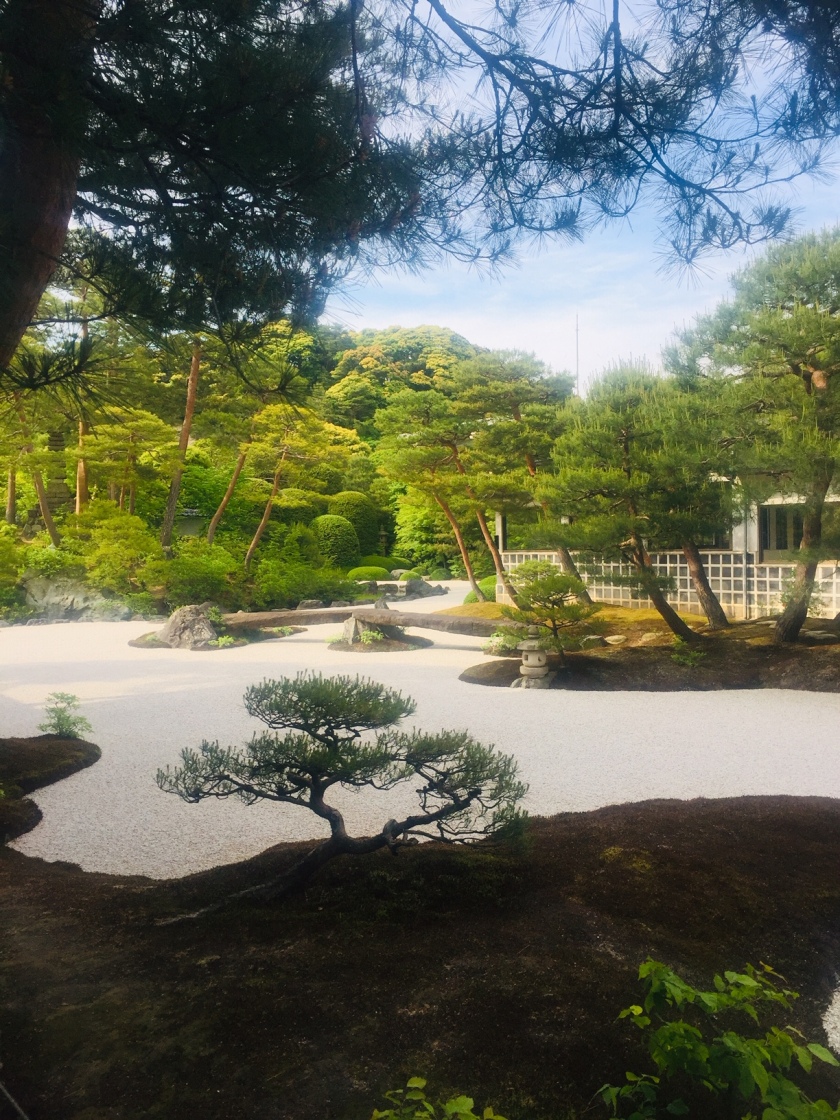 The following day our tour landed in Kanazawa, an artistic center that escaped bombing in World War II. The highlight was a visit to Kenrouku-en gardens. Kenroku means “combined six” referring to a renowned garden from the Sung-dynasty in China that required six attributes for perfection: seclusion, spaciousness, artificiality, antiquity, abundant water, and broad views. Construction began in 1676, and by the early 1880s it had matured to the beautiful garden seen today. The 25 acres comprises an entire city block.

Most of the gardens we visited in Japan were constructed under the direction of the ruling class, as were those at Mount Vernon, Peacefield, Monticello, and Montpelier. No matter the differences shaped by culture, landscape, and time—and recognizing the backbreaking work often produced by forced labor—these places nonetheless have matured to something that reaches millions of people from all walks of life. There is a peacefulness that comes from visiting these special places on opposite sides of the world. As Wulf describes the differences between the beautiful—which was applied to scenes or objects that were “small, smooth, delicate, and light”—and the sublime—associated with vast, often rugged landscapes—I couldn’t help but give thanks for the opportunity to become engrossed in both over the past two weeks.